During the campaign he pledged to get out. Now the killing will continue. 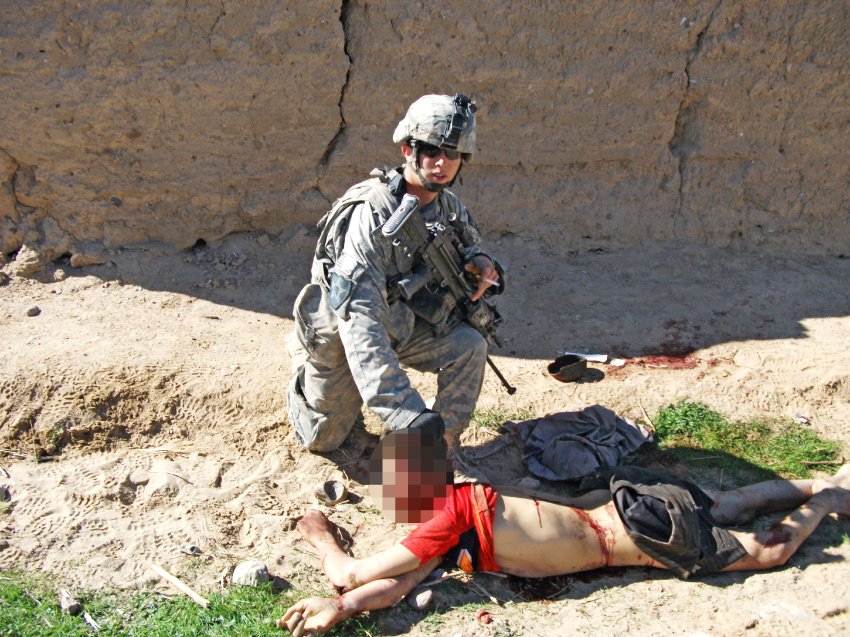 This Afghan farmer boy was murdered in 2010 by a group of U.S. Army soldiers called the Kill Team. Photo originally appeared in Der Spiegel. Image from Wikimedia Commons.

I’ve just finished listening to Trump’s speech on Afghanistan. While generally I have been hostile to Trump’s policies, this is one time when I think he was right the first time — when, during the campaign, he pledged to get out of Afghanistan.

In his speech he took ownership of the Afghan War — the longest in U.S. history, and one of the most tragically pointless. He pledged to take the bonds off the military — to let the war be fought without limits. What that means, when translated, is that civilian casualties will increase (as has already happened) as the military feels fewer restraints. And what that also means is that one of the things which produces terrorists — the killing of civilians — is back in play.

The military reality is that the Taliban
are winning this war.

He pledged not to engage in nation-building, which is commendable, but which also raises the question of what we are doing there in the first place. The military reality is that the Taliban are winning this war. They are winning because the central government in Kabul is corrupt, because the Americans are hated by much of the population, and, most of all, for better or worse, the Taliban are more highly motivated.

I am not a supporter of the Taliban. If we contrast this with the other war the U.S. lost, Vietnam, the Communist forces in Vietnam brought education with them, medical care, and women’s rights. No, they didn’t bring the free elections of which the U.S. sometimes boasts too loosely (with the continuing efforts to restrict voting), but they were not corrupt. There was much which Ho Chi Minh represented that Americans would have agreed with. Not so with the Taliban, which repress women, enforce dress codes much of the population resents, place limits on the music that can be played. But they are true believers in their form of Islam, they are not corrupt, and they have been steadily winning.

There is every indication — it was not quite buried in Trump’s speech — that the U.S. would welcome a chance to negotiate a truce with the Taliban, which can hardly leave the government in Kabul feeling secure. Those negotiations are overdue. Let them start tomorrow.

What was equally disturbing was Trump’s approach to Pakistan and India.

What was equally disturbing was Trump’s approach to Pakistan and India. Yes, Pakistan is informally allied with the Taliban. But the United States depends on Pakistan for the routes through which supplies reach our forces in Afghanistan. Trump’s rebuke of Pakistan almost implied they were not quite civilized. Far more serious, he went out of his way to praise India, Pakistan’s mortal enemy, thus further complicating everything about the U.S. role in Afghanistan. It is no longer just the Taliban the U.S. is fighting, but now we will be embroiled in the India/Pakistan conflict.

Not noticed by the public — because it is an aspect of the Trump Administration which seems to have passed without comment — all the tools the U.S. needs to bring diplomacy to bear are lacking. The State Department is barely staffed. The experts that might help provide Trump with information on that area have been dismissed, their departments closed.

Trump has called on U.S. allies to increase their spending (and their troop levels) in the Afghan war, and done so just at the point where the U.S. is isolated on the world stage.

So the killing will continue. Taliban forces will die, and innocent children. American military will die. Too many will return home with grievous wounds. The Taliban will extend its reach until, as happened in Vietnam, the U.S. loses the military struggle altogether.

The Afghan War must end. Trump was right the first time. The U.S. must withdraw. The human and material resources spent in Afghanistan are wasted. The innocent will be killed along with the guilty.

The war must end. Now, not a year from now.

[David McReynolds is retired. He worked for many years in the pacifist and socialist movements. He lives on Manhattan’s Lower East Side and can be reached at davidmcreynolds7@gmail.com.]