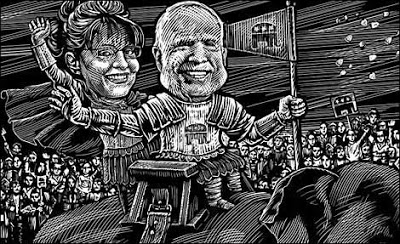 Illustration by Bromley.
‘The questions swirling around Ms. Palin on the first day of the Republican National Convention… brought anxiety to Republicans’
By Elisabeth Bumiller / September 1, 2008

ST. PAUL — A series of disclosures about Gov. Sarah Palin, Senator John McCain’s choice as running mate, called into question on Monday how thoroughly Mr. McCain had examined her background before putting her on the Republican presidential ticket.

On Monday morning, Ms. Palin and her husband, Todd, issued a statement saying that their 17-year-old unmarried daughter, Bristol, was five months pregnant and that she intended to marry the father.

Among other less attention-grabbing news of the day: it was learned that Ms. Palin now has a private lawyer in a legislative ethics investigation in Alaska into whether she abused her power in dismissing the state’s public safety commissioner; that she was a member for two years in the 1990s of the Alaska Independence Party, which has at times sought a vote on whether the state should secede; and that Mr. Palin was arrested 22 years ago on a drunken-driving charge.

Aides to Mr. McCain said they had a team on the ground in Alaska now to look more thoroughly into Ms. Palin’s background. A Republican with ties to the campaign said the team assigned to vet Ms. Palin in Alaska had not arrived there until Thursday, a day before Mr. McCain stunned the political world with his vice-presidential choice. The campaign was still calling Republican operatives as late as Sunday night asking them to go to Alaska to deal with the unexpected candidacy of Ms. Palin.

Although the McCain campaign said that Mr. McCain had known about Bristol Palin’s pregnancy before he asked her mother to join him on the ticket and that he did not consider it disqualifying, top aides were vague on Monday about how and when he had learned of the pregnancy, and from whom.

While there was no sign that her formal nomination this week was in jeopardy, the questions swirling around Ms. Palin on the first day of the Republican National Convention, already disrupted by Hurricane Gustav, brought anxiety to Republicans who worried that Democrats would use the selection of Ms. Palin to question Mr. McCain’s judgment and his ability to make crucial decisions.

At the least, Republicans close to the campaign said it was increasingly apparent that Ms. Palin had been selected as Mr. McCain’s running mate with more haste than McCain advisers initially described.

Up until midweek last week, some 48 to 72 hours before Mr. McCain introduced Ms. Palin at a Friday rally in Dayton, Ohio, Mr. McCain was still holding out the hope that he could choose a good friend, Senator Joseph I. Lieberman, independent of Connecticut, a Republican close to the campaign said. Mr. McCain had also been interested in another favorite, former Gov. Tom Ridge of Pennsylvania.

But both men favor abortion rights, anathema to the Christian conservatives who make up a crucial base of the Republican Party. As word leaked out that Mr. McCain was seriously considering the men, the campaign was bombarded by outrage from influential conservatives who predicted an explosive floor fight at the convention and vowed rejection of Mr. Ridge or Mr. Lieberman by the delegates.

Perhaps more important, several Republicans said, Mr. McCain was getting advice that if he did not do something to shake up the race, his campaign would be stuck on a potentially losing trajectory.

With time running out — and as Mr. McCain discarded two safer choices, Gov. Tim Pawlenty of Minnesota and former Gov. Mitt Romney of Massachusetts, as too predictable — he turned to Ms. Palin. He had his first face-to-face interview with her on Thursday and offered her the job moments later. Advisers to Mr. Pawlenty and another of the finalists on Mr. McCain’s list described an intensive vetting process for those candidates that lasted one to two months.

“They didn’t seriously consider her until four or five days from the time she was picked, before she was asked, maybe the Thursday or Friday before,” said a Republican close to the campaign. “This was really kind of rushed at the end, because John didn’t get what he wanted. He wanted to do Joe or Ridge.”

Mr. McCain’s advisers said repeatedly on Monday that Ms. Palin was “thoroughly vetted,” a process that would have included a review of all financial and legal records as well as a criminal background check. A McCain aide said the campaign was well aware of the ethics investigation and had looked into it.

“It was obviously something that anybody Googling Sarah Palin knew was in the news and there was a very thorough vetting done on that and also on the daughter,” the aide said.

People familiar with the process said Ms. Palin had responded to a standard form with more than 70 questions. Although The Washington Post quoted advisers to Mr. McCain on Sunday as saying Ms. Palin had been subjected to an F.B.I. background check, an F.B.I. official said Monday the bureau did not vet potential candidates and had not known of her selection until it was made public.

Mark Salter, Mr. McCain’s closest adviser, said in an e-mail message that Ms. Palin had been interviewed by Arthur B. Culvahouse Jr., a veteran Washington lawyer in charge of the vice-presidential vetting process for Mr. McCain, as well as by other lawyers who worked for Mr. Culvahouse. Mr. Salter did not respond to an e-mail message asking if Ms. Palin had told Mr. Culvahouse and his lawyers that her daughter was pregnant.

In Alaska, several state leaders and local officials said they knew of no efforts by the McCain campaign to find out more information about Ms. Palin before the announcement of her selection, Although campaigns are typically discreet when they make inquiries into potential running mates, officials in Alaska said Monday they thought it was peculiar that no one in the state had the slightest hint that Ms. Palin might be under consideration.

Representative Gail Phillips, a Republican and former speaker of the State House, said the widespread surprise in Alaska when Ms. Palin was named to the ticket made her wonder how intensively the McCain campaign had vetted her.

“I started calling around and asking, and I have not been able to find one person that was called,” Ms. Phillips said. “I called 30 to 40 people, political leaders, business leaders, community leaders. Not one of them had heard. Alaska is a very small community, we know people all over, but I haven’t found anybody who was asked anything.”

The current mayor of Wasilla, Dianne M. Keller, said she had not heard of any efforts to look into Ms. Palin’s background. And Randy Ruedrich, the state Republican Party chairman, said he knew nothing of any vetting that had been conducted.

State Senator Hollis French, a Democrat who is directing the ethics investigation, said that no one asked him about the allegations. “I heard not a word, not a single contact,” he said.

A number of Republicans said the McCain campaign had to some degree tied its hands in its effort to keep the selection process so secret.

“If you really want it to be a surprise, the circle of people that you’re going to allow to know about it is going to be small, and that’s just the nature of it,” said Dan Bartlett, a former counselor to President Bush.

Former McCain strategists disagreed on whether it would have been useful for Ms. Palin’s name to have been more publicly floated before her selection so that issues like the trooper investigation and her daughter’s pregnancy might have already been aired and not seemed so new at the time of her announcement.

“It’s a risk,” said Dan Schnur, a former McCain aide who now directs the Jesse M. Unruh Institute of Politics at the University of Southern California. “No matter how great the candidate, it’s a significant risk to put someone on the ticket” who hasn’t been publicly scrutinized.

“They obviously felt it was worth the risk to rev up the base and potentially reach out to Clinton supporters,” Mr. Schnur said.

2 Responses to Disclosures on Palin Raise Questions on Vetting Process