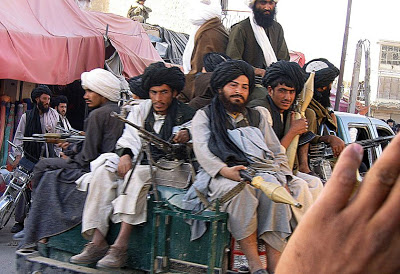 ‘The basic ingredients of further Afghan disasters are in place,’ warns Norman Solomon, executive director of the Washington-based Institute For Public Accuracy, ‘including, pivotally, a dire lack of wide-ranging debate over Washington’s options.’

President-elect Obama should drop his plans to escalate the war in Afghanistan, a country that never attacked America, out of pity for a helpless civilian population that will only suffer increasing misery from an expanded fight against the Taliban and its allies.

Recall military intervention was used to capture Panamanian military dictator Manuel Noriega for a drug charge in December 20, 1989. That illegal assault, ordered by President George H.W. Bush, killed 500 Panamanian civilians, wounded 3,000 more, and pushed 15,000 people out of their homes, an incredible price innocent people were made to pay to enable the U.S. to nail one drug-runner.

In Afghanistan, the civilian population has already paid a much higher price.
“We will kill bin Laden. We will crush al Qaeda. That has to be our biggest national security priority,” Senator Barack Obama pledged during the televised presidential debate of last October 7.

Yes, and in so doing, thousands of additional Afghan civilians are liable to perish, likely far more of them then the 3,000 Americans massacred on 9/11 in New York and Washington.

In just the first two years after 9/11, the U.S. had already killed between 3,000 and 5,000 Afghan civilians, David Krieger noted in Counterpunch. And Jay Shaft, of the Coalition For Free Thought in Media, points to a United Nations estimate that up to 500 Afghan civilians are dying monthly from U.S. cluster bombs, most of them children and teenage boys.

“The president (Obama) is going to inherit the problem the Soviets had roughly 15 years ago during the Soviet jihad. You cannot tame the people in the North-West Frontier Province and on the border in Pakistan and Afghanistan,” Dalton Fury, the commander of special operations at Tora Bora, recently told Cable News Network.

By its illegal invasion of Iraq, the Bush regime allowed the Taliban in Afghanistan and its allies to regain control of the nation. Anand Gopal, of the Christian Science Monitor, writes that just a 20-minute drive outside the capital Kabul, “the American-backed government of Afghanistan no longer exits.” He states, “Violence has reached record levels this year and Afghanistan is now considered a deadlier battlefield than Iraq.”

This is not to say bin Laden should not be brought to trial or that Americans are not entitled to closure on the 9/11 attacks.

But a leading U.S. international law authority says (1) there is no sufficient proof that bin Laden even masterminded the 9/11 attacks and (2) diplomacy to secure justice would be the more rational and humane approach than armed force.

Francis Boyle, a University of Illinois professor, writes in “Destroying World Order”(Clarity Press): “There is not and may never be conclusive proof as to who was behind the terrible bombings..on Sept. 11… Suffice it to say that the accounts provided by the United States government simply do not add up.”

There is no evidence bin Laden ordered the attack or even that Al Qaeda or the Taliban was involved, Boyle said. Recall that former Secretary of State Colin Powell pledged the U.S. would produce a “White Paper” to document the case against bin Laden, but that he never produced one. Instead, then British Prime Minister Tony Blair, hardly an American official, issued a report the British press ridiculed for its lack of proof.

Boyle also points out the so-called bin Laden video that the Central Intelligence Agency “miraculously discovered” in a bombed out house in Jalalabad, Afghanistan, was “disjointed” and “non-sequential.”

The videotape is suspect because the Pentagon’s translated version was not word for word but an “information flow” paraphrase created at The Johns Hopkins School for Advanced International Studies where Paul Wolfowitz, the war hawk and deputy defense secretary, had just been dean. In case you didn’t know, Johns Hopkins is no impartial academic institution but one of the very biggest Pentagon contractors in terms of the boodle it siphons off from the military-industrial complex.

“The bin Laden video provided no evidence that implicated the Taliban government of Afghanistan in the 11 September 2001 attacks (and)…no justification for the United States to wage war against Afghanistan, a U.N. Member State, in gross violation of the United Nations Charter,” Boyle writes.

Little known to most Americans is that Afghanistan likely was invaded because its Taliban government refused to okay pipelines sought by Union Oil Co. of California(UNOCAL).

“Since Central Asia is landlocked, the United States government wanted to find a way to get the oil and natural gas out, while avoiding Iran, Russia, and China,” Boyle said. “The easiest way to do that was to construct a pipeline south through Afghanistan, into Pakistan and right out to the Arabian Sea. UNOCAL had been negotiating with the Taliban government of Afghanistan for quite some time, still with the full support of the U.S. government into the summer of 2001, but their negotiations had failed. The U.S….then rendered a proverbial offer that could not be refused to the Taliban government.”

A “major consideration” for the U.S. invasion of Afghanistan in 2001 was to put in office a regime favoring the oil and gas pipelines the U.S. sought running from Turkmenistan south through Afghanistan to the Arabian Sea coast of Pakistan, writes Chalmers Johnson in “The Sorrows of Empire”(Owl Books).

Oil “has been a constant motive” driving “the vast expansion of (U.S.) bases in the Persian Gulf” in Bahrain, Kuwait, Oman, Qatar, Saudi Arabia, and UAR, Johnson says. Because Afghanistan’s Taliban regime opposed the U.S.-backed venture, its overthrow became the secret reason behind “the war on terrorism,” Johnson claims.

To build the proposed $2-billion, 918-mile natural gas pipeline and a $4-billion 1,005-mile oil pipeline UNOCAL “needed a government in Kabul it could deal with in obtaining transit rights.”

Thus, Johnson writes, “A remarkable group of Washington insiders came together to promote the Unocal project”:

* President Bush first appointed Khalilzad to his National Security Council(NSC) staff, under Condoleezza Rice, and on December 31, 2001, named him “special envoy” to Afghanistan, only nine days after the Karzai government took office in Kabul.

“It should be recalled,” Johnson writes, Khalilzad joined NSC on May 23, 2001, “just in time to work on an operational order for an attack on Afghanistan.”

Johnson writes “it would appear that the attacks of September 11 provided an opportunity for the United States to act unilaterally to remove the Taliban, without assistance from Russia, India, or any other country.”

According to Boyle, even before 9/11 the Taliban rulers of Afghanistan had made “repeated offers to negotiate a solution” over “the disposition of bin Laden—as well as over the UNOCAL oil pipeline.”

Boyle said the Taliban offered to have bin Laden tried in a neutral Islamic court by Muslim judges applying the laws of Sharia; then they modified this to have him tried before some type of neutral court, which would exclude handing him over to the U.S; and finally, “even offered to try bin Laden themselves provided the United States gave them some credible evidence of his involvement in the ll September attacks, which was never done.”

Bush responded in his September 20, 2001, address “by ruling out any type of negotiations and instead issuing the Taliban government an impossible ultimatum,” Boyle said.

As President Bush put it, “tonight, the United States of America makes the following demands on the Taliban: Deliver to United States authorities all the leaders of al Qaeda who hide in your land. (Applause.) Release all foreign nationals, including American citizens, you have unjustly imprisoned… Close immediately and permanently every terrorist training camp in Afghanistan, and hand over every terrorist, and every person in their support structure, to appropriate authorities. (Applause.) Give the United States full access to terrorist training camps, so we can make sure they are no longer operating.” Bush emphasized: “These demands are not open to negotiation or discussion. (Applause.) The Taliban must act, and act immediately. They will hand over the terrorists, or they will share in their fate.”

Boyle said that by giving an impossible ultimatum to Afghanistan that ruled out negotiations and chose the military path, Bush ignored “12 or so multilateral conventions already on the books that deal with…international terrorism,” “many of which could have been used…to handle this matter in a lawful, effective, and peaceful manner.”

“So a decision was made remarkably early in the process to ignore and abandon the entire framework of international treaties that had been established under the auspices of the UN Organization for the past 25 years,” Boyle summarized, “in order to deal with acts of international terrorism and instead go to war against Afghanistan, a U.N. member state.”

Surely, the hour has come for the U.S. to reverse the failed Bush military approach and negotiate an equitable solution to stop the killing and bring bin Laden to justice. If you think the U.S. cannot negotiate with the Taliban, recall during the 1980s it was the CIA that funneled literally billions of dollars directly into Taliban pockets to overthrow Afghanistan’s Soviet-backed government, increasing the prospect of an invasion by the Red Army, which is exactly what happened.

Hasn’t Afghanistan suffered enough? The U.S. would be far better off if instead of pouring tens of thousands of troops into Afghanistan it sent in a like number of unarmed Peace Corps volunteers with a comparable budget. Time to give non-violence a chance. C’mon, guys, show a little imagination, huh?

[Sherwood Ross is a veteran reporter and public relations consultant. He formerly worked for the City News Bureau of Chicago, the Chicago Daily News, and as a columnist for wire services.]