Dr. Keister : Obama and the Steelers Won! Next Up: Universal Health Care 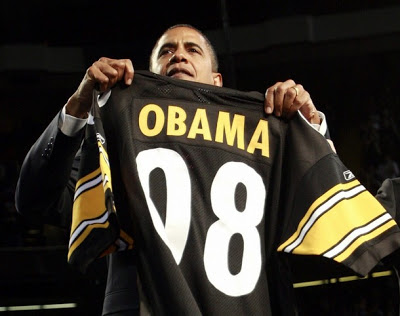 I require two more coupes in the next year to depart this orb entirely satisfied, the economy to begin to show recovery and single payer, universal health care to become a reality.

It would seem that even an ancient curmudgeon can have his happy days!

We elected Obama and the Steelers won the Super Bowl. These two incidents interact quite well as the President and Dan and Art Rooney seem to be morally and spiritually on the same page and Coach Tomlin and the President appear to be temperamentally and intellectually akin. I require two more coupes in the next year to depart this orb entirely satisfied, the economy to begin to show recovery and single payer, universal health care to become a reality. However, the Republicans in Washington are still determined to sabotage any legislation providing for the well being of the greater public and continue to show strict adherence to the Bush approach.

Russ Baker in his book “Family of Secrets” quotes Paul Krugman regarding that Bush’s policy: “He (Bush) wants the public to believe government is always the problem, never the solution. But it’s hard to convince people that government is always bad when they see it doing good things. So his philosophy says that government must be prevented from solving problems, even if it can. In fact, the more good a proposed government program would do, the more fiercely it must be opposed.” This is exactly the attitude relative to universal health care that the Republicans, and the insurance industry-subsidized Democrats, display. We still have rough sailing ahead.

Mr. Krugman is one of the few nationally quoted economists who is publicly pursuing universal health care, in this time of economic crises. In a column in the Jan. 30, 2009, issue of The New York Times he points out how dire the already bad health care situation will become as families lose their employer sponsored health care. Thus, a national plan becomes a must to avoid total chaos. Mr. Krugman calls our attention to research sponsored by the Commonwealth Fund which shows achieving universal coverage with a plan similar to that of Mr. Obama’s campaign proposals would add “only” about $104 billion to federal spending in 2010 — not a small sum, of course, but not large compared with, say, the tax cuts in the Obama stimulus plan. Dr. Krugman’s article is worth reviewing in its entirety.

We who support HR 676 again want to warn the progressive community, as is called to my attention in an e-mail from the Green Party dated Jan. 29, 2009, that Montana Sen. Max Baucus, chair of the Senate Finance Committee, wants the Single Payer option” off the table,” and along with other Democrats has proposed a market-based plan that would achieve universal coverage by REQUIRING Americans who lack health coverage to PURCHASE INSURANCE FROM A PRIVATE COMPANY. In short, Sen. Baucus will demand by fiat that one patronize a private company. As I have noted before, I have encountered prior information that questions the constitutionality of such a demand, and I would suggest that some of our readers who are scholars in constitutional law to further comment on the matter. I would also suggest that the constituents of the senators backing such a proposal investigate their donations from the insurance and pharmaceutical industries on opensecrets.org.

Further, Op-Ed News of Jan. 28, 2009, in an article by Bruce Dixon, quotes an interview on C-Span’s “Newsmakers” Program, where Democratic Whip James Clyburn of South Carolina declared that even with the biggest majority in a generation, Democrats will not even try to put a universal health care bill on the president’s desk this year, or maybe the next either.” This in spite of the fact that Clyburn last April signed on as a cosponsor of HR 676, the bill introduced by Rep. John Conyers, as proposed by Physicians For A National Health Plan. Why has the Democratic leadership in the House never made any move to open HR 676 to debate in Committee in an effort to get the legislation to the floor of the House? Why? Why? Why?

The administration does keep proposing new health information technology as an antidote to our current health care crisis. This was surveyed in some detail by a release from the Commonwealth Fund on Jan/ 28, 2009. The proposals that are in accord with the experience in several European nations, would surely advance the communications and information transfer within the medical profession, but it is not a panacea for the overall health care crisis.

There are still steps that Congress must pursue. The Alliance for Retired Americans noted in a Jan. 30 release, that Rep. Marion Berry (D-Ar) introduced the Medicare Prescription Drug and Choice Act of 2009 (HR 684), a bill to create Medicare-run prescription drug plans to compete with the private plans offered by Medicare Part D. The bill would also require that the Secretary of HHS directly negotiate the price of drugs with the pharmaceutical companies, similar to plans already in effect through the V.A. If half the present elderly who are being conned by private insurance under Medicare part D switched to the government plan it could add up to as much as $20 billion a year for the next 10 years.

The Obama Administration is planning a commission to review savings in Social Security and Medicare. These folks must focus on the Berry Bill, as well as on eliminating all Medicare Advantage Plans that were created by the Bush administration to deplete the Medicare Trust Fund, and further enrich the insurance industry.

In considering revisions to Medicare the commission members must include physicians and specialists in Medical ethics who can address the Medicare expenditure on needless and inhumane prolongation of life in the elderly. Our society in the United States cannot come to grips with the fact that we are born and that we die. Due to lack of public information on advance directives, powers of attorney and hospice care, we force many elderly, against their will, to survive on dialysis or respirators. A commission on Medicare can not only be responsible to the public purse, but to the ethics of one’s final days on earth. I have in a previous essay on The Rag Blog cited reference to the late Pope .Pius’s directive on “no abnormal means”

Further, as the Obama Administration investigates the law-breaking and favoritism of the Bush administration we should note an article in the Jan. 29, 2009 issue of Mother Jones, that looks at how the F.D.A. deals with the pharmaceutical industry, which rivals the gun manufacturers, and tobacco companies for the position of the most amoral in America.

The F.D.A. is riddled with Bush cronies who dominate the agency’s thinking, and many of whom have had past connections to the pharmaceutical industry. These folks are not only incompetent but can do irreparable harm. Witness, for instance, a recent decision to remove Darvon Compound, a 54 year old non-narcotic (though controlled) pain killer from the market, thus forcing individuals with chronic pain to switch to medications of opium derivation for relief. Hardly bright, especially since anyone on anticoagulants cannot take aspirin or any of several anti-inflammatory agents. Further, not only do many members of the board of FDA exhibit professional incompetence, but as Mr. Ridgeway points out have long-standing financial ties to the pharmaceutical or medical research institutions.

The new Secretary For Veterans’ Affairs must be encouraged to implement increased efficiency and funding for the V.A. Maya Schenuary points out in a Jan. 29, 2009, TruthOut article, that US casualties are still climbing from the wars in Iraq and Afghanastan. Battlefield injuries and deaths now number 81,361. There are from all wars 809,000 veterans with pending claims. Especially sad is the delay in treating those with a PTSD diagnosis; thus, accounting for the frightening number of suicides. The Bush administration too long ignored our veterans, thus Obama must move quickly in this area.

Another frightening aspect of our failing economy, and loss of insurance for health care, is the increasing number of suicides in the civilian population due to depression caused by loss of employment or homes. One example is the recent episode in California where a man killed his wife, five children and himself, after losing his job and his home.

Mr. Bush surely has left the nation in a situation that bodes to be worse than that of The Great Depression, yet I find folks who are oblivious tp the legacy that he leaves us with. I guess that it is understandable. Chris Hedges, In Common Dreams on Nov. 10, 2009, notes that there are 42 million American adults, 20 percent of whom hold high school diplomas, who cannot read, as well as the 50 million who read at a fourth or fifth grade level. Nearly a third of the nation’s population is illiterate or barely literate. And these numbers are growing at two million per year. These folks are dependant on skillfully manipulated images for information (“diitoheads?”), and cannot differentiate between lies and truth. They are informed by simplistic, childish narratives and cliches.

In “The Prosecution of George W. Bush For Murder,” Vincent Bugliosi quotes some alarming statistics from a recent poll. Very tellingly, although the poll found that “most everyone [in the civilized world] feels that the state has a responsibility to take care of poor people who cannot take care of themselves, only 23% of Americans did. In Britain and France, the figure was 62%, in Spain 71%, Italy 66%, Russia 70%, Germany 50%.”

Somewhere I encountered a poll that showed in our Christian Society that only 30% of the respondents have even actually read for themselves “The Beatitudes” or “The Sermon on The Mount.”

1 Response to Dr. Keister : Obama and the Steelers Won! Next Up: Universal Health Care