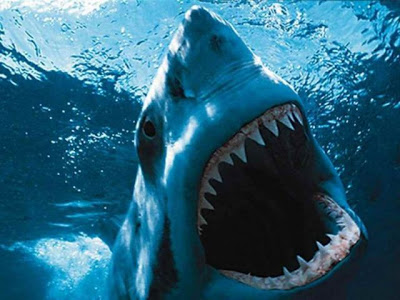 Jaws: Leaving an opening for the Republicans.
From the jaws of victory…
The Democrats, Medicare and
the ‘winning message’

I share the great joy of the progressive community at the Democratic victory in the New York 26th District. All of the pundits appearing on TV news, amid the pharmaceutical commercials ad nauseam, inform us that the Democrats have a “winning message” relative to Medicare come 2012. Pause for a moment, please, and consider how in recent years the Democrats have shown an aptitude for grabbing defeat out of the jaws of victory.”

Yes, maintaining Medicare, and Social Security in their present forms is a very inspiring message. But we have some 17 months ahead for the message to be distorted and overwhelmed by the Republican smear machine. We must recall that we are not dealing with a terribly well informed, cognitively alert population.

I have worked in the area of educating the public about single payer health care for some years. At many a seminar I have been approached by a senior citizen who heatedly informs me, “I don’t need government health insurance; I have Medicare! ” A similar situation exists among many of the elderly who have Medicare Advantage plans and feel that they are on Medicare.

They do not realize that they were conned by slick salesmanship into giving up their Medicare and signing up for a private insurance plan underwritten by the government at 17% more per year cost to the Medicare Trust Fund.

They are unaware that their “benefits” are set by a profit-making insurance company (why have an insurance industry except to profit the owners and stockholders?) who have by slight-of-hand modified their “benefits” in a manner that appears on superficial examination to provide something better than Medicare per se.

They overlook the deductions, the exclusions, the co-pays, that are not inherent in regular Medicare. I wonder how many Medicare Advantage members will have their way paid to the Mayo Clinic or Johns Hopkins should they wish? My regular Medicare does not restrict my choices. Many Medicare Advantage plans do limit choice save within a specified area or to specified doctors or institutions.

In any event, the current health care legislation progressively reduces the payout from the Medicare Trust Fund to private insurance companies for underwriting the Medicare Advantage plans. Rest assured that the Republican spin machine will play on the naive Medicare Advantage customers with the slogan “the Democrats are going to cut your Medicare.”

Granted Medicare expenses, when compared to income from the current wage tax, have become excessive, especially in view of the high unemployment. Medicare costs must be reduced. There are many factors involved, but let us begin with a paragraph from Maggie Mahar’s book, Money Driven Medicine:

All too often, hospitals employ some of their most sophisticated tools crudely, even callously, in futile end-of-life care. While roughly 80 percent of Americans hope to die at home, 75 percent end their lives in hospitals or nursing homes. Of these, a third die after 10 days in an ICU. This helps explain why roughly one-quarter of all Medicare dollars are spent during the final year of a patient’s life, thanks in part to the cost of drugs and devices that prolong not just life but pain and suffering.

Perhaps this is a place that rational, fearless, public servants can begin cutting expenses. Here are some suggestions:

In the meantime another player has appeared on the scene. The hospice industry is now being commercialized. Some 40 years ago the hospice movement began to provide humane end-of-life care to those facing death. This was a movement started by compassionate, dedicated volunteers. Happily, we in Erie, Pennsylvania, have one of the outstanding programs in the country.

Now big business has entered the scene and once again will profit from the dying and their grieving families. Read more about this at the Physicians for a National Health Program website. This article is based on a more detailed study in the Journal of Law, Medicine and Ethics. I felt for many years that the predatory burial industry had stretched the limits of decency in the United States but the advance of corporatism into the realm of dying is beyond my ethical comprehension.

Once again ProPublica is at the forefront in exposing the collusion between the pharmaceutical industry and sections of the medical establishment. We never see generic medications advertised on television — only brand name products, many of which are remakes of older products. Some we see advertised have had limited clinical trials, like the anti-inflammatory medication that was widely marketed several years ago, but was — after prolonged clinical testing — found to be a cause of heart disease and is no longer on the market.

In 2002, when Families USA, a non-profit health care consumer advocacy group, reviewed the financial reports submitted to the SEC by nine of the largest U.S. based pharmaceutical companies, the group’s analysis showed drugmakers investing only $19 billion in R & D, while shelling out some $45 billion for marketing, advertising, and administration. Meanwhile the industry pocketed $31 billion in profits.

So, if an older person is even able to obtain insurance, in all probability with a large deductible, the voucher will be sent directly to the insurance company. Some estimates suggest that, on the average, the individual will be required to spend $6,000 out-of-pocket to supplement the voucher.

I close with a sobering quote from Mahatma Gandhi: ” You assist an evil system most effectively by obeying its orders and decrees.” Let us encourage the average citizen not to fall for the blather of the politicians who are in the pay of the corporations.

2 Responses to Dr. Stephen R. Keister : Democrats, Medicare, and the ‘Jaws of Victory’