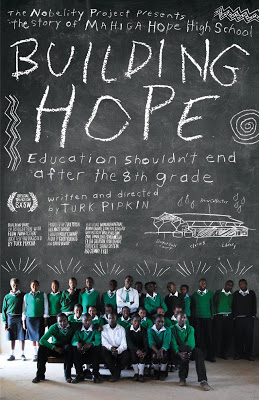 Turk Pipkin’s Building Hope:
A story of how little it takes
to make a big difference

Building Hope is the third of a trilogy of films by Austin-based filmmaker Turk Pipkin exploring the challenges facing the youth of the world today.

The first film, Nobelity, gathered together the ideas of a number of Nobel Laureates. The second, One Peace at a Time — subtitled “a film about a messed up world… and how we could fix it” — visited projects around the world that were making a difference for children’s rights, and featured Muhammad Yunus, Steve Chu, Desmond Tutu, and Willie Nelson.

Pipkin’s latest, Building Hope, is the most compelling of all. By following one single project through from concept to completion, the film illuminates the lives of the participants around the light of the event itself.

Beauty is the first emotion that the film evokes. Set in the mountains of Kenya, among some of the most dramatic scenery on Earth, the film reveals the land, the wildlife, and the people as the spectacular photography unfolds. Through good composition and editing, the viewer enters a place of wonder and brighter vision. The photography by Turk, his wife Christy, and his daughters, Katie and Lilly, reveals the love both given to and returned by this rural community.

The project began when Turk met Wangari Maathai while working on One Peace at a Time. She started the Green Belt movement in Africa and Turk went there to plant trees. But what he really wanted to do was plant trees at a school. That’s how he met Joseph Mutongu and visited the Mahiga Primary School. It had mud floors and slat walls. Nevertheless the school’s motto was — and is — “Hard Work Pays.”

After planting his tree at the school, Turk returned home and, through the Nobelity Project — Turk and Christy’s Austin-based nonprofit — raised some money to build a water system for the primary school. The kids and parents did the work.

Two years later Turk returned to Kenya and the Mahiga Primary School to see the finished water system. The electricity needed for the water purification also made it possible to have a computer lab. So he helped put that in place as well. He saw that there was no place for the students to go after they finished primary school so, with a call back home to Christy, they decided to help build a high school for the kids at Mahiga.

The financial requirements were daunting. Turk decided to combine the release of One Peace at a Time, a film about securing children’s rights, with building the high school. He wanted it to be known as “the movie that built a high school.” So he did fundraising for the school at showings of One Peace at a Time. He knew that a bigger school would require more clean water so he decided to build a basketball court to catch rainwater and purify it using solar power.

He recruited his friend, Willie Nelson, to help. Willie’s response was: “That’s a choir I want to sing in.” The court would cost $100,000 so he called on the Nike Gamechangers Award who, together with Cameron Sinclair of Architecture for Humanity, began to design and build the school and basketball court, The whole Mahiga community enthusiastically participated with ideas and labor.

Greg Elsner, was selected to be the on-site architect. He would live in the community and see the project through. As Greg said, when he first came to Mahiga he didn’t know anyone and the future location of the school was an open field. When he left he was part of the community and a two-story stone school house and full rainwater basketball court stood where the field had been.

The project was not without it’s setbacks. Cost overruns, poor roads, and an AWOL contractor all had to be overcome. With the project a month behind schedule, Turk took the only sensible course — a road trip. He wanted to see some of the partnership programs in other parts of Kenya.

One was Comfort the Children which works with special needs kids — some of them going out in the community for the first time. In the Mukuru slum, Nairobi, Kenya, the SIDAREC Community Center will be a model for kids achieving freedom from poverty. And, while he was there, Turk visited with President Obama’s sister, Youth Counselor Auma Obama. She works with the “Sport for Social Change and Youth Empowerment Initiative,” concentrating on building community infrastructure.

On returning, Turk, who is six-foot-seven himself, undertook to teach the kids basketball — a sport they had never played before. Fortunately, the first adult mentor at the school was Ester Diaga, who had toured Africa playing for the Kenyan women’s basketball team. She had the moves, and with the kid’s enthusiasm, Mahiga was well on it’s way to being a serious contender.

One of the students, George Abrahams, was given a journalism scholarship. While Turk was away, Abrahams shot the sequences of raising the rainwater basketball court with a pocket-sized Flip video camera. They built a giant 30-foot-high scaffold from eucalyptus poles to winch the steel trusses in place for the rainwater court. After dropping a truss, a storm came through and shut the operation down. It was a good time to have a safety meeting. George’s scenes cut well with the rest of the film and really show what can be done with very low-cost equipment and a hopeful attitude.

The climax of the film comes with the ribbon-cutting for the school and the first game is played on the new rainwater court. It hadn’t rained in two months and as the game neared the finish it began to pour and the water tanks began to fill. It was like a cosmic alignment of community, time, and place.

Mahiga Hope High School, with capacity for 320 students, is now part of the Kieni West Education District. It will provide a healthy learning environment and pure water for the children of Mahiga for generations to come. Leave the world a little better place? I’ll say. The music and photography alone make the film worth seeing. But seeing the miracle of positive change and feeling in some way a part of it is even better.

Building Hope opens Friday, June 3, 7 p.m., at the Violet Crown Cinema, located at 434 W. 2nd Street in Austin, and is scheduled to run through June 9. The Violet Crown is a lovely new downtown art house theater that features independent films. There are several showings a night, but it would be wise to get tickets early. This is one to see. It will restore your faith in people and in cinema, all for the price of a ticket — not a bad deal all the way around.

[William Michael Hanks has written, produced and directed film and television productions for the National Aeronautics and Space Administration, The U. S. Information Agency, and for Public Broadcasting. His documentary film,The Apollo File, won a Gold Medal at the Festival of the Americas. Mike, who worked with the original Rag in Sixties Austin, lives in Nacagdoches, Texas. Read more articles by Mike Hanks on The Rag Blog.]