When Sra. X came out with her littlest guy (who had just turned three in December), his eyes widened and he ran straight into my arms. 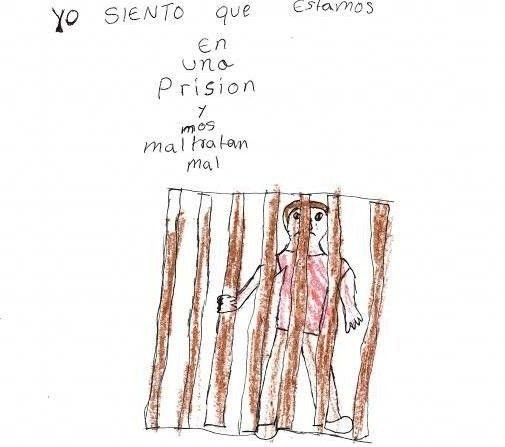 Drawings by a child incarcerated at the Karnes County Detention Center.

This piece is dedicated to the Memory of Judith Rosenberg, who taught me that stories are more important than statistics.

AUSTIN — A recent Friday in March was marked by the Vernal Equinox and a New Moon. I spent most of it in a car, between Austin and Karnes City, Texas. It was my fourth visit to the Karnes County Family Detention Center — and while each visit was memorable, it was the last visit that compels me to write this.

I feel that it is the culmination of all these impressions that forms an arc in my growing understanding of the complexities of immigration detention. In Spanish, one of the words for spectrum is abanico — which also can be a fan. My goal is to offer you an abanico of my experiences visiting family detention.

My first visit was in October 2014, when I was included in the group given an official tour with dozens of activist immigration attorneys from across the country, along with human rights defenders and others involved in the movement to end family detention. That was when I first met Sra. X, whose name and the names of her children will be omitted to protect them as they are still wending their way through the maze of paper and appeals in the dysfunctional immigration detention upside-down world.

I visited Sra. X at the request of her longtime friend, who had recently crossed country to see her. At that time, she and her three children were among the first to be detained at Karnes, back in August. I met her and her two-and-a-half-year-old hijo in the cafeteria that had been made available to the tour so that attorneys and activists could meet with the women and children. 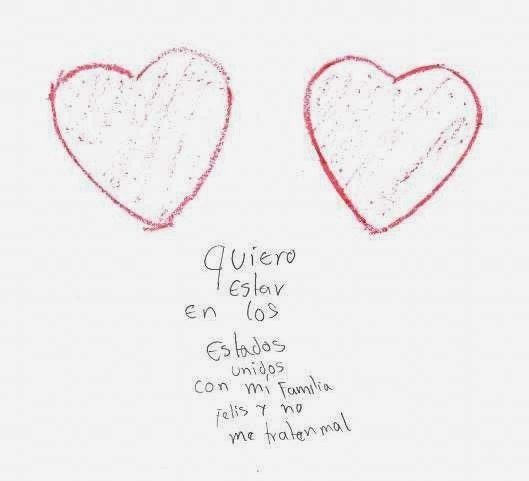 In its new incarnation, family detention is a  version of the Hutto Family Detention Center in Taylor, Texas, but hopped up on steroids. Family Detention ended at Hutto over five years ago in one of the few good moves by a young Obama administration. As the families left, women were brought in and the T. Don Hutto Family Detention Center morphed into the only all-women’s detention center in the country — currently holding 512 women daily — under the management of the notorious CCA (Corrections Corporation of America) under contract to ICE. The name changed, but the evil remains.

[Full Disclosure: I recently stepped down from my position as consultant to the Hutto Visitation Program of Grassroots Leadership. I now write as a member of civil society.]

The second time I visited Karnes (managed by GEO, formerly Wackenhut) was earlier this year when a journalist asked if I would help her interview someone caught in family detention. At that visit, we were able to spend over three hours as we were there at the same time as her attorney. I met the two older children, who joined us as their school let out.

The children in detention are not enrolled in public school, but in classrooms brought in by a charter school; this is where the school-age children living behind bars with their mothers spend most of their day. Mothers of under-school-age children must spend the majority of the day in their rooms. That afternoon the children drew pictures while their mother explained the gang violence she fled and the trauma she continued to be exposed to by being detained for six months (at the time — now close to eight) with three small children.

The third time I visited Karnes, I was not there to see Sra. X, but to help another friend whose family had collected the $4,500 bond but wanted a U.S. citizen to actually bring the money and papers into the belly of the beast, first at ICE in San Antonio and — many hours later –- to present the papers at Karnes and walk the mother and child out to freedom and the car of their family, waiting in the parking lot.

The child, a four-year-old girl, had never met her grandparents, who had lived in the U.S. since before she was born. She had been told that she would be brought out by her family. The child, although she had never met me, took my hand and gave me a small smile and we walked outside, into the foggy night. Her mother was able to reunite with her aunt.

The first hour of driving was difficult due to a fog that I had not seen since I lived in Xalapa, Veracruz, the Seattle of Mexico.

We stopped at a little store and bought juice, coffee, cookies, and water for the trip back to Austin. The fog didn’t abate. At one point, my small friend called out, “Abuela, mi jugo.” My friend in the front seat laughed and said, “She thinks you’re her abuela. She was told she would soon meet her abuela. She thinks it’s you.” When we have met since that night, she continues to call me abuela, even though she soon met her real grandmother.

To friends I have seen recently, I have shared that story along with an attempt to express the exhilaration I felt upon walking a mother and daughter out of a cruel immigration gulag that profits from the injustices poured upon them. These women and children are refugees who came to our borders, seeking release from the violence and corruption of their own countries only to be met by USian violence, corruption, and greed almost equal to their experience in Honduras, El Salvador, and Guatemala. 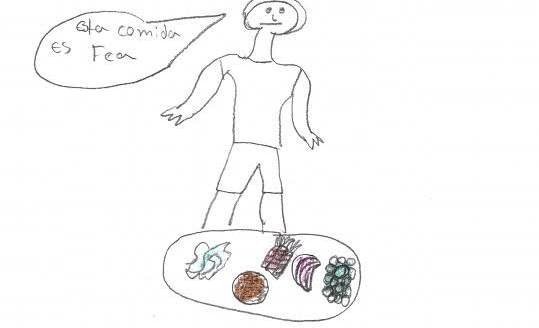 On the Equinox I drove out with a friend from the widening circle of people who visit those trapped in immigrant detention. We enjoyed early wildflowers and the emerging bluebonnets as we escaped IH-35 and drove State Hwy 123. We came prepared with $20 in quarters in two plastic bags, though we were disappointed by the scarcity of even semi-healthy snacks in the profit-generating snack machines, available to visitors, but not the visited.

We submitted the names and “A” numbers” (that’s “A” for “Alien,” folks) and were able to see four of the five we hoped to see. Midway through the visit the guard came over and told us we could only visit an hour — something that had not been told to us when we came in. The women did not come out all at once.

When Sra. X finally came out with her littlest guy (who had just turned three in December), his eyes widened and he ran straight into my arms. So did the three-year-old daughter of an indigenous woman whom I had met the last time I visited. She also ran into my arms and held tight. Admittedly this is a treasured gift — and helps to balance out some of the sadness and anger that has accrued in me over the years of visiting women (and now children) in detention.

Later the middle child came, permitted to leave school early by his mother. He had a gift for me. It was a manila envelope with the drawings that you see with this story.

One hope held by many of us who work to change these policies is that more and more citizens hear the truth from those who are living it. It is important also to remember that these family gulags are brought to you by the same people who helped commit genocide in Guatemala, instigate and increase the brutality of a civil war in El Salvador, and engineer a coup to topple the democratically-elected president of Honduras and replace him with their own corrupt narco jefes. Too many of the righteous uninformed wring their hands and wonder why these people are coming to our borders.

They are here because USian policy destroyed their own countries. But in the predictable way of the capitalist system, some people and corporations have figured out how to profit from human misery.

Voila! Immigrant detention, new and improved: with children! How can we tolerate our elected leaders continuing to victimize innocent children and their mothers by locking them up in for-profit detention facilities for months on end? If we thought this was happening in another country, we would be outraged.

But the stories and images are coming out and inside these prisons solidarity is happening. The women of Central America have begun to know each other and support each other in their shared detention.

They and their children are speaking to us. They have drawn us pictures. I, for one, can’t look away.
Postscript

Since I wrote this piece, solidarity indeed happened and a hunger strike, started by close to 80 women on the Tuesday of Easter week, continued for many days. The number fell to less than 20 but during the strike, when I was able to visit twice, the women appeared greatly empowered. They were delighted to hear that their hunger and work strike was being reported as far away as England.

I’ll be returning to Karnes in a few days — and will send The Rag Blog more stories about the outcome of the strike and the protest planned for May 2 in Dilley, the newest horror in family detention.