It is hard to conceive of dignity if one is stateless or forced to live in poverty, at the edges of abundance. 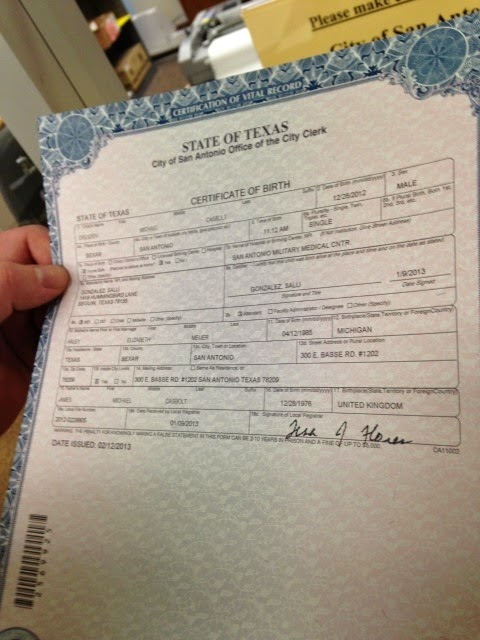 A few weeks ago The Rag Blog‘s Alice Embree asked me if I had heard any first-hand reports about the denial of birth certificates to children born in the U.S. to mothers without U.S. documentation. I responded with an emphatic, “No.” The women and children I had visited at the Karnes Family Detention Center and with whom I continue to be in touch did not fall into this group. I had heard nothing from them or from women I have come to know at Posada Esperanza.

Days later I received an invite to the next Community Potluck hosted by Grassroots Leadership’s Detention Visitation Team. The guest speaker was Virginia Raymond, attorney and advocate for immigrants held in Immigration Detention. Her topic was about the current lawsuit about the refusal to give birth certificates to the parents of children born in the U.S. if the parents did not possess acceptable identification.

So, this is where I admit I was wrong. I hasten, however, to share what I learned when I went to the potluck and sat across from Raymond. The table was filled with a mix of Austin’s civil society: people who visit immigrants held in detention at Hutto and Karnes detention centers, grad students, teachers, retired teachers and researchers — all connected by our concern for the immigrants who have been imprisoned in what Immigration and Customs Enforcement (ICE) euphemistically calls Immigration Detention.

Ms. Raymond began with her own story about her belated respect for the 14th Amendment to the U.S. Constitution. To refresh our collective memory, here is Article 1:

It appears that some civil servants in Texas have begun to deny birth certificates to babies born of mothers who do not possess what these state employees consider valid U.S. identification documentation.

Government officials have changed the standard of what identification the parents must present.

For the last few years, many of us have protested the use of the word illegal to describe the immigrants coming to the U.S. across the southern border. It is not only the payasos vying for the Republican nomination who use the term. In a recent article in The New York Times about this issue, the phrase illegal immigrant was used over a dozen times. The Times apparently had not gotten the memo explaining that no person can be illegal.

In an attempt to avoid the term illegal lots of people switched to undocumented.
I started to have trouble with that word, too. Sitting in the visiting area at Hutto and at Karnes, women told me of the birth certificates, baptismal certificates, and marriage certificates they had sent to them by their families in Honduras, Guatemala, and El Salvador. All these documents were sent with great cost and difficulty — but they existed.

They were often sent to replace the documents that had been lost or stolen on the women’s long and danger-ridden journeys to the U.S. I started thinking that to call these women undocumented was as wrong as calling them illegal. They had documents; they just weren’t USian.

Virginia had lots to say regarding the intricacies of what constituted valid documentation; about the change that resulted in not accepting the previously accepted matrículas issued by the Mexican consulates; of the purported invalidity of expired visas and the complex issues pertaining to international law.

A growing number of parents and children have joined the original lawsuit.

A growing number of parents and children have joined the original lawsuit. Virginia told us that she was representing Mexico and that El Salvador, Honduras, Guatemala, the ACLU, and the Anti-Defamation League were among the other groups that had filed amicus briefs in support of the lawsuit.

Virginia explained that any of us can read and download most of the documents in a federal court case through the Public Access to Court Electronic Records system, known as PACER. She has posted some of these documents on her webpage, which allowed me to understand the importance of this case.

Virginia explained, however, that the issue was not merely about documentation but about dignity. I would add that it is also part of the long game the Republicans are playing, to ensure that future voting rolls do not include the children of the immigrants coming to our country at this moment of history. It is hard to conceive of dignity if one is stateless or forced to live in poverty, at the edges of abundance.

Whether it is to restrict the voting rights of African-Americans, whose ancestors paid the terrible price through enslavement and servitude, or those from the Northern Triangle (Honduras, El Salvador and Guatemala) whose countries have been crushed and impoverished through exploitative, colonial oppression — it is the same goal. These people must not vote or be allowed the dignity of complete citizenship.

Once again, I am reminded of a fragment of the immigration stories I was told as a child. The story was about the day that my bubbe, Esther, was called before the immigration judge in Chicago (sometime during the 1930’s after being in the U.S. for over 20 years and with three of her seven children born in the U.S.). The Judge asked my bubbe, “Mrs. Friedman, why do you want to become a United States citizen?”

Without hesitation Bubbe replied, “So I can vote for Mr. Roosevelt.” At that point, the Judge laughed, signed the document, and told my grandmother that she was now a U.S. citizen. I have imagined that the judge may well have been a New Deal appointee. I’ll never know.

And quite possibly, years later, from her grave, a few yards from Emma Goldman, in the Workman’s Circle section of Chicago’s Waldheim cemetery, Esther and Emma had lively — or perhaps I should say spirited — discussions about the value of voting — and the capricious nature of USian immigration and deportation policies.

I wonder if the often quoted French expression Plus les choses changent, plus elles restent les mêmes (the more things change, the more things stay the same) is an appropriate caution in these times.