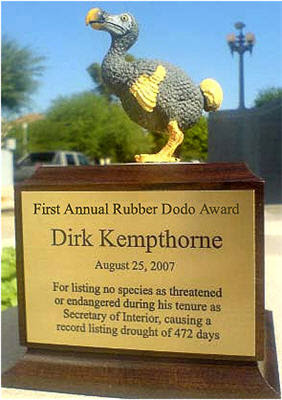 A coalition of scientists and advocates from 105 environmental groups across the US is pressing the Bush administration to allow more public input before it restructures the country’s endangered species law.

Environmentalists got a shock to the system 10 days ago when the Bush administration revealed it would end the 35-year-old requirement that government agencies consult with independent scientists before building roads, dams or mines that could harm threatened species.

The interior secretary who proposed the rule, Dirk Kempthorne, defended the move as necessary to make sure climate change is not used to justify more endangered species protections. Activists cried foul, accusing the Bush administration of launching a “sneak attack” on wildlife during its last days in office.

But what made the Bush administration’s plans even more alarming to environmentalists was the limited outreach that Kempthorne’s department plans to do before changing the endangered species law.

Every US government agency must seek public comment on a rules change before making it. Comments are generally accepted for several months — but the species protections are scheduled to pass after only 30 days of discussion.

“It appears as if the [Bush] administration is doing whatever it can to discourage participation in the democratic process,” National Wildlife Federation executive director John Kostyack said.

“I think we can expect more sneaky assaults like this on our public land and wildlife laws as this administration heads for the exits.”

In addition, public comments will only be accepted by mail or through a government website that automatically shares one’s personal information. The limited comments could prevent green groups from generating mass opposition to the new rule via fax and email.

While they battle to prevent the species law from being changed, environmental groups are also pushing for Kempthorne to open up the process and allow the public greater say over wildlife protections.

“The abbreviated timeline and restrictive commenting options raise serious concerns that the department of the interior is attempting to rewrite a bedrock environmental statute without allowing for adequate public involvement,” 105 environmental groups wrote in a letter to Kempthorne yesterday.

The groups also urged Kempthorne to hold public hearings on the new rule where advocates from both sides of the endangered species debate could exchange views.

Signers of the letter hail from nearly every state in America and a cornucopia of scientific institutions, from the Gulf Restoration Network to the Missouri Botanical Garden to California Trout Incorporated.