ENVIRONMENT : The Island in the Wind 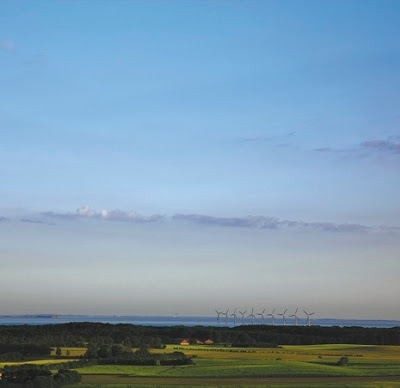 Once people on Samsø started thinking about energy, a local farmer explains, “it became a kind of sport.” Photo by Joachim Ladefoged.
A Danish community’s victory over carbon emissions
by Elizabeth Kolbert

Jørgen Tranberg is a farmer who lives on the Danish island of Samsø. He is a beefy man with a mop of brown hair and an unpredictable sense of humor. When I arrived at his house, one gray morning this spring, he was sitting in his kitchen, smoking a cigarette and watching grainy images on a black-and-white TV. The images turned out to be closed-circuit shots from his barn. One of his cows, he told me, was about to give birth, and he was keeping an eye on her. We talked for a few minutes, and then, laughing, he asked me if I wanted to climb his wind turbine. I was pretty sure I didn’t, but I said yes anyway.

We got into Tranberg’s car and bounced along a rutted dirt road. The turbine loomed up in front of us. When we reached it, Tranberg stubbed out his cigarette and opened a small door in the base of the tower. Inside were eight ladders, each about twenty feet tall, attached one above the other. We started up, and were soon huffing. Above the last ladder, there was a trapdoor, which led to a sort of engine room. We scrambled into it, at which point we were standing on top of the generator. Tranberg pressed a button, and the roof slid open to reveal the gray sky and a patchwork of green and brown fields stretching toward the sea. He pressed another button. The rotors, which he had switched off during our climb, started to turn, at first sluggishly and then much more rapidly. It felt as if we were about to take off. I’d like to say the feeling was exhilarating; in fact, I found it sickening. Tranberg looked at me and started to laugh.

Samsø, which is roughly the size of Nantucket, sits in what’s known as the Kattegat, an arm of the North Sea. The island is bulgy in the south and narrows to a bladelike point in the north, so that on a map it looks a bit like a woman’s torso and a bit like a meat cleaver. It has twenty-two villages that hug the narrow streets; out back are fields where farmers grow potatoes and wheat and strawberries. Thanks to Denmark’s peculiar geography, Samsø is smack in the center of the country and, at the same time, in the middle of nowhere.

For the past decade or so, Samsø has been the site of an unlikely social movement. When it began, in the late nineteen-nineties, the island’s forty-three hundred inhabitants had what might be described as a conventional attitude toward energy: as long as it continued to arrive, they weren’t much interested in it. Most Samsingers heated their houses with oil, which was brought in on tankers. They used electricity imported from the mainland via cable, much of which was generated by burning coal. As a result, each Samsinger put into the atmosphere, on average, nearly eleven tons of carbon dioxide annually.

Then, quite deliberately, the residents of the island set about changing this. They formed energy coöperatives and organized seminars on wind power. They removed their furnaces and replaced them with heat pumps. By 2001, fossil-fuel use on Samsø had been cut in half. By 2003, instead of importing electricity, the island was exporting it, and by 2005 it was producing from renewable sources more energy than it was using.

The residents of Samsø that I spoke to were clearly proud of their accomplishment. All the same, they insisted on their ordinariness. They were, they noted, not wealthy, nor were they especially well educated or idealistic. They weren’t even terribly adventuresome. “We are a conservative farming community” is how one Samsinger put it. “We are only normal people,” Tranberg told me. “We are not some special people.”

This year, the world is expected to burn through some thirty-one billion barrels of oil, six billion tons of coal, and a hundred trillion cubic feet of natural gas. The combustion of these fossil fuels will produce, in aggregate, some four hundred quadrillion B.T.U.s of energy. It will also yield around thirty billion tons of carbon dioxide. Next year, global consumption of fossil fuels is expected to grow by about two per cent, meaning that emissions will rise by more than half a billion tons, and the following year consumption is expected to grow by yet another two per cent.

When carbon dioxide is released into the air, about a third ends up, in relatively short order, in the oceans. (CO2 dissolves in water to form a weak acid; this is the cause of the phenomenon known as “ocean acidification.”) A quarter is absorbed by terrestrial ecosystems—no one is quite sure exactly how or where—and the rest remains in the atmosphere. If current trends in emissions continue, then sometime within the next four or five decades the chemistry of the oceans will have been altered to such a degree that many marine organisms—including reef-building corals—will be pushed toward extinction. Meanwhile, atmospheric CO2 levels are projected to reach five hundred and fifty parts per million—twice pre-industrial levels—virtually guaranteeing an eventual global temperature increase of three or more degrees. The consequences of this warming are difficult to predict in detail, but even broad, conservative estimates are terrifying: at least fifteen and possibly as many as thirty per cent of the planet’s plant and animal species will be threatened; sea levels will rise by several feet; yields of crops like wheat and corn will decline significantly in a number of areas where they are now grown as staples; regions that depend on glacial runoff or seasonal snowmelt—currently home to more than a billion people—will face severe water shortages; and what now counts as a hundred-year drought will occur in some parts of the world as frequently as once a decade.

Today, with CO2 levels at three hundred and eighty-five parts per million, the disruptive impacts of climate change are already apparent. The Arctic ice cap, which has shrunk by half since the nineteen-fifties, is melting at an annual rate of twenty-four thousand square miles, meaning that an expanse of ice the size of West Virginia is disappearing each year. Over the past ten years, forests covering a hundred and fifty million acres in the United States and Canada have died from warming-related beetle infestations. It is believed that rising temperatures are contributing to the growing number of international refugees—“Climate change is today one of the main drivers of forced displacement,” the United Nations’ high commissioner for refugees, António Guterres, said recently—and to armed conflict: some experts see a link between the fighting in Darfur, which has claimed as many as three hundred thousand lives, and changes in rainfall patterns in equatorial Africa.

“If we keep going down this path, the Darfur crisis will be only one crisis among dozens of others,” President Nicolas Sarkozy, of France, told a meeting of world leaders in April. The Secretary-General of the United Nations, Ban Ki-moon, has called climate change “the defining challenge of our age.”

In the context of this challenge, Samsø’s accomplishments could be seen as trivial. Certainly, in numerical terms they don’t amount to much: all the island’s avoided emissions of the past ten years are overwhelmed by the CO2 that a single coal-fired power plant will emit in the next three weeks, and China is building new coal-fired plants at the rate of roughly four a month. But it is also in this context that the island’s efforts are most significant. Samsø transformed its energy systems in a single decade. Its experience suggests how the carbon problem, as huge as it is, could be dealt with, if we were willing to try.

Thanks to Gerry Storm / The Rag Blog