Ethnic Cleansing of Iraq Is Not Yet Finished 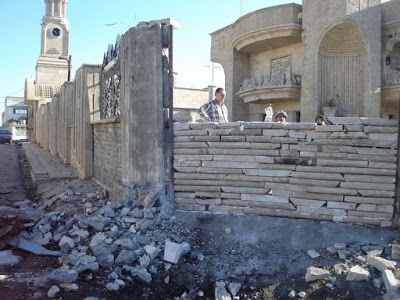 MOSUL — Militants blew up three empty Christian homes yesterday in the northern Iraqi city of Mosul, where more than 3,000 Christian families have fled in the past two days.

The governor of northern Ninevah province, Duraid Mohammed Kashmoula, said more than 3,000 Christians have fled Mosul over the past week alone in what he called a “major displacement.”

This is despite months of US and Iraqi military operations to secure the city.

He said most have left for churches, monasteries and the homes of relatives in nearby Christian villages and towns.

“The families were already displaced in two of the houses that were attacked. The militants evacuated the third and then blew it up,” parliamentarian Unadim Kanna said.

“Of course Al Qaeda elements are behind this campaign against Christians,” he said.

Meanwhile, Iraq’s parliament suspended proceedings for one day yesterday in mourning for a Shi’ite MP who was killed in a bomb attack.

Parliamentarians from across rival parties condemned the killing of Saleh Al Ugaili, a member of the parliamentary bloc loyal to anti-American cleric Moqtada Al Sadr.

In fresh violence, Turkish warplanes and artillery attacked 31 Kurdish rebel bases as part of a week-long operation in northern Iraq after an attack that killed 17 Turkish soldiers, the military said.

Ahmed Danees, spokesman for the rebel Kurdistan Workers Party (PKK) in Iraq, said that new shelling had taken place in mountainous areas inside Iraq for about an hour.

The Turkish president said for the first time publicly that Ankara was talking to the Iraqi government about acting against the PKK.

In other violence, a US soldier was killed in a roadside bomb blast in southern Iraq.

In another development, Turkish authorities claimed to have foiled a probable suicide attack by a suspected Kurdish militant in Istanbul yesterday.

Police arrested a woman in her 30s in the heart of Turkey’s largest city who they said had been faking pregnancy and was carrying 8.8kg of explosives, 15 detonators and a manual button in her bag.

The amount of material the suspect was carrying suggested she was preparing an attack on a scale as “murderous” as the twin bombings in Istanbul in July that killed 17 people, sources said.