That Would Be the New World Order COINTELPRO 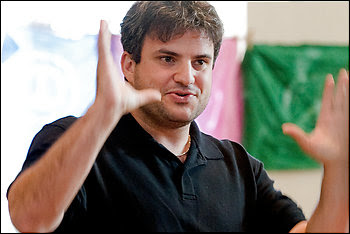 “None of us are fringe people,” said David Zirin, referring to a characterization made by Maryland’s former state police superintendent. Photo: Kevin Clark / The Washington Post.
Spying on Activists Discussed at Forum: Group Questions Why Some, Not Others
By Lisa Rein / October 12, 2008

The 53 men and women wrongly classified by the Maryland State Police as terrorists include two Catholic nuns, a Democratic candidate for Congress, a man who campaigns against military recruiting at high schools and one person who has never set foot in the state.

They share a passion for peaceful political protest. But as the activists were invited last week to review their files before they are purged from state and federal databases that track terrorism suspects, their identities indicate that the 14-month surveillance operation in 2005 and 2006 targeted not just local opponents of the death penalty and Iraq war, as police claim, but a broader group.

Frederick lawyer Barry Kissin, his wife and two other members of the Frederick Progressive Action Coalition received letters from the police last week notifying them that they were on the list. Since the anthrax attacks in 2001, the group has been devoted to marching peacefully to fight the government’s expansion of biodefense research at Fort Detrick, arguing that the research will pose a health threat.

“That’s what ties the four of us together,” said Kissin, who ran unsuccessfully for Congress as a Democrat in 2006.

Kissin was one of 70 activists who gathered at Takoma Park Presbyterian Church yesterday for a forum sponsored by the Washington Peace Center to discuss a strategy to ensure that their names are erased from any anti-terrorism databases. Among their questions are why some of them were targeted and others spared. Some people named in surveillance logs released in July by the American Civil Liberties Union of Maryland — which sued for the documents under public records laws — have not been contacted by police.

Some who made the list said they were not in Maryland when the spying took place, prompting them to wonder if the operation went on for longer or if their names were culled from other databases. The activists were furious that they will not be allowed to keep paper copies of their files or review them with attorneys for the ACLU, which is representing many of them.

“I am not a fringe person, and none of us are fringe people,” said David Zirin, a sportswriter and death penalty opponent from Silver Spring, referring to a characterization by former state police superintendent Thomas E. Hutchins at a legislative hearing last week.

State police spokesman Greg Shipley said Friday that he did not know how commanders in the Division of Homeland Security and Intelligence decided which names to enter in the databases. “What [State Police Superintendent Col. Terrence B. Sheridan] has said is the action taken wasn’t appropriate and that’s why the individuals’ names are being purged.”

State Sen. Jamie B. Raskin (D-Montgomery) told the group that he plans to co-sponsor a bill in the upcoming legislative session that would prohibit covert monitoring by police of any political group unless they have an “articulated” suspicion of criminal activity.

Their antiwar protests landed Sister Carol Gilbert and Sister Ardeth Platte, both of Baltimore, in federal prison in Colorado after they trespassed on a military base and poured blood into a nuclear missile silo to protest the war in Afghanistan. When they received their letters from the state police, they were offended that they would be able to review only “relevant” information the police have gathered on them. “Anything you have on me is relevant as far as I’m concerned,” Gilbert said.

Nancy Kricorian, a New York writer who coordinates that state’s chapter of Code Pink, a national nonviolent women’s antiwar group, said she received an e-mail from the state police Monday asking for her address. She thought it was a prank. “Honestly, I’ve never been to Maryland,” she said, although she might have driven down Interstate 95 to the District to march in a Mother’s Day peace vigil in Lafayette Square. When Code Pink plans a protest in New York, she’s the one who calls police to let them know. “To me that’s a big irony here, that I’m the police liaison,” she said.

Although most activists on the list appear to represent progressive causes, a neo-Nazi who says he is the leader of the American National Socialist Workers Party said police contacted him last week, too. William A. White said that he moved from Derwood to Roanoke, Va., in 2003, and wondered why he was under surveillance. White said he espouses nonviolence, although he has faced several criminal charges.

Pat Elder of Bethesda said he believed he was targeted for his leadership of a national network that opposes military recruitment in high schools. When he called the police to arrange to review his file, he said he was told he would have only a half-hour. After he requested more time, the commander on the phone told him he could have it because his file was “quite extensive.”

This entry was posted in RagBlog and tagged COINTELPRO, Police Harassment, Police State. Bookmark the permalink.