Exxon Valdez – An Inevitability, Not an Accident 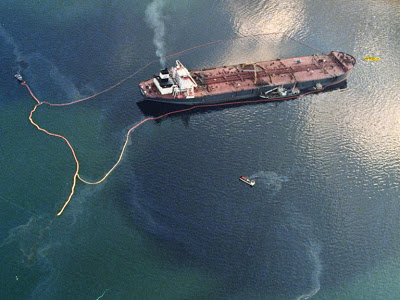 Twenty years after Exxon Valdez slimed over one thousand miles of Alaskan beaches, the company has yet to pay the $5 billion in punitive damages awarded by the jury. And now they won’t have to. The Supreme Court today cut Exxon’s liability by 90% to half a billion. It’s so cheap, it’s like a permit to spill.

Exxon knew this would happen. Right after the spill, I was brought to Alaska by the Natives whose Prince William Sound islands, livelihoods, and their food source was contaminated by Exxon crude. My assignment: to investigate oil company frauds that led to to the disaster. There were plenty.

But before we brought charges, the Natives hoped to settle with the oil company, to receive just enough compensation to buy some boats and rebuild their island villages to withstand what would be a decade of trying to survive in a polluted ecological death zone.

In San Diego, I met with Exxon’s US production chief, Otto Harrison, who said, “Admit it; the oil spill’s the best thing to happen” to the Natives.

His company offered the Natives pennies on the dollar. The oil men added a cruel threat: take it or leave it and wait twenty years to get even the pennies. Exxon is immortal — but Natives die.

And they did. A third of the Native fishermen and seal hunters I worked with are dead. Now their families will collect one tenth of their award, two decades too late.

In today’s ruling, Supreme Court Justice David Souter wrote that Exxon’s recklessness was ”profitless” — so the company shouldn’t have to pay punitive damages. Profitless, Mr. Souter? Exxon and it’s oil shipping partners saved billions – BILLIONS – by operating for sixteen years without the oil spill safety equipment they promised, in writing, under oath and by contract.

The official story is, “Drunken Skipper Hits Reef.” But don’t believe it, Mr. Souter. Alaska’s Native lands and coastline were destroyed by a systematic fraud motivated by profit-crazed penny-pinching. Here’s the unreported story, the one you won’t get tonight on the Petroleum Broadcast System:

It begins in 1969 when big shots from Humble Oil and ARCO (now known as Exxon and British Petroleum) met with the Chugach Natives, owners of the most valuable parcel of land on the planet: Valdez Port, the only conceivable terminus for a pipeline that would handle a trillion dollars in crude oil.

These Alaskan natives ultimately agreed to sell the Exxon consortium this astronomically valuable patch of land — for a single dollar. The Natives refused cash. Rather, in 1969, they asked only that the oil companies promise to protect their Prince William Sound fishing and seal hunting grounds from oil.

In 1971, Exxon and partners agreed to place the Natives’ specific list of safeguards into federal law. These commitment to safety reassured enough Congressmen for the oil group to win, by one vote, the right to ship oil from Valdez.

The oil companies repeated their promises under oath to the US Congress.

The spill disaster was the result of Exxon and partners breaking every one of those promises – cynically, systematically, disastrously, in the fifteen years leading up to the spill.

Forget the drunken skipper fable. As to Captain Joe Hazelwood, he was below decks, sleeping off his bender. At the helm, the third mate would never have collided with Bligh Reef had he looked at his Raycas radar. But the radar was not turned on. In fact, the tanker’s radar was left broken and disasbled for more than a year before the disaster, and Exxon management knew it. It was just too expensive to fix and operate.

For the Chugach, this discovery was poignantly ironic. On their list of safety demands in return for Valdez was “state-of-the-art” on-ship radar.

We discovered more, but because of the labyrinthine ways of litigation, little became public, especially about the reckless acts of the industry consortium, Alyeska, which controls the Alaska Pipeline.

* Several smaller oil spills before the Exxon Valdez could have warned of a system breakdown. But a former Senior Lab Technician with Alyeska, Erlene Blake, told our investigators that management routinely ordered her to toss out test samples of water evidencing spilled oil. She was ordered to refill the test tubes with a bucket of clean sea water called, “The Miracle Barrel.”

* In a secret meeting in April 1988, Alyeska Vice-President T.L. Polasek confidentially warned the oil group executives that, because Alyeska had never purchased promised safety equipment, it was simply “not possible” to contain an oil spill past the Valdez Narrows — exactly where the Exxon Valdez ran aground 10 months later.

* The Natives demanded (and law requires) that the shippers maintain round-the-clock oil spill response teams. Alyeska hired the Natives, especiallly qualified by their generations-old knowledge of the Sound, for this emergency work. They trained to drop from helicopters into the water with special equipment to contain an oil slick at a moments notice. But in 1979, quietly, Alyeska fired them all. To deflect inquisitive state inspectors, the oil consortium created sham teams, listing names of oil terminal workers who had not the foggiest idea how to use spill equipment which, in any event, was missing, broken or existed only on paper.

In 1989, when the oil poured from the tanker, there was no Native response team, only chaos.

Today, twenty years after the oil washed over the Chugach beaches, you can kick over a rock and it will smell like an old gas station.

The cover story of the Drunken Captain serves the oil industry well. It falsely presents America’s greatest environmental disaster as a tale of human frailty, a one-time accident. But broken radar, missing equipment, phantom spill teams, faked tests — the profit-driven disregard of the law — made the spill an inevitability, not an accident.

Yet Big Oil tells us, as they plead to drill in the Arctic National Wildlife Reserve, as Senator John McCain calls for drilling off the shores of the Lower 48, it can’t happen again. They promise.

[Greg Palast is an investigative journalist and author of the New York Times bestseller, ARMED MADHOUSE: From Baghdad to New Orleans — Sordid Secrets and Strange Tales of a White House Gone Wild.]

This entry was posted in RagBlog and tagged Criminal Justice, Energy, Environment. Bookmark the permalink.