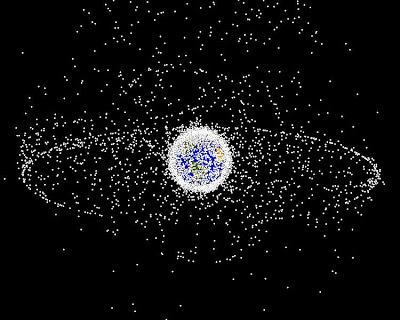 With much of our new technologies being dependent upon satellites, a solution to the problem of the proliferation of space junk must be found.

Each year, various governments send several new satellites into orbit around our planet. These satellites have a variety of purposes, and operate from one to many years. But eventually, they all outlive their usefullness and become just more space junk, cluttering up the space around Earth.

A piece of space junk can orbit the planet for many decades before its orbit decays enough that it falls back toward Earth and burns up in the atmosphere. That is why the space junk is piling up around our planet, and soon it may start to pose a danger for any new satellites being launched. With much of our new technologies being dependent upon satellites, a solution to the problem of the proliferation of space junk must be found.

One solution is to save some power for the end of the satellites usefulness, and use that to ignite an engine to send it plummeting back to Earth. There are a couple of drawbacks to this. First, it is very expensive to outfit every satellite this way. Second, there is no guarantee that even if the money is spent, the satellite will have enough power left to power the re-entry engine.

Fortunately, there is a cheaper and more reliable solution being developed. Scientists are now working on a system they call the Innovative DEorbiting Aerobrake System (IDEAS). Basically, it is a sail that can be deployed at the end of a satellite’s usefullness.

Even at heights of 470 miles above the Earth’s surface, there are residual air molecules. The sail would catch these molecules and provide a drag effect on the satellite. While it would not send the satellite instantly plunging toward Earth, it would significantly cut the amount of time it would take for its orbit to decay enough to send it plummeting back.

For example, a French scientific satellite is to be launched soon. It is called Microscope, and will complete its mission in about a year. If left to decay and fall on its own, it could remain in orbit for between 50 and 100 years. However, it is being fitted with a deployable sail which is expected to bring the satellite down within 25 years.

While this may not be the complete solution to space junk, it can be of immense value in controlling the lifespan of future such space junk. Imagine how much it would help to cut the space lifetime of a piece of space junk by 50% to 75%.

A piece of space junk that has burned up falling back to Earth, poses no danger to the launch and orbit of a future satellite. 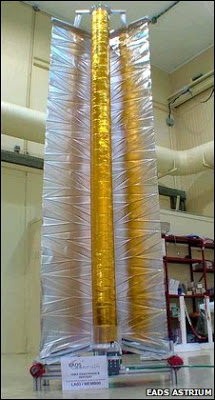 This entry was posted in Rag Bloggers and tagged Science, Space. Bookmark the permalink.

1 Response to Farewell to Space Junk? Satellites With Sails?