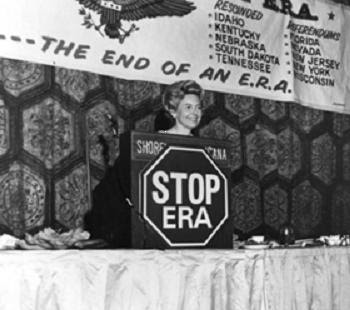 Washington University is giving Phyllis Schlafly an honorary doctorate. Let me run that by you again. , the distinguished 155-year-old seat of higher learning in St. Louis, is giving an honorary degree to Phyllis Schlafly–archfoe of the Equal Rights Amendment, the United Nations, Darwinism and other newfangled notions, and the promoter of innumerable crackpot far-right conspiracy theories who called the Bomb “a marvelous gift that was given to our country by a wise God.”

Her eighty-two years haven’t mellowed her one bit: last year she blamed the Virginia Tech massacre on the English department; called intellectual men “liberal slobs”; advocated banning women from traditionally male occupations like construction, firefighting and the military; and defended men’s property rights over their wives’ vaginas (“by getting married, the woman has consented to sex, and I don’t think you can call it rape”). The campus is in an uproar, and no wonder. After four years of hard work, female seniors get to watch their school honor someone who thinks they should park their diplomas in the kitchen sink. Washington U might as well bring in mad misogynist Chris Matthews as commencement speaker. Oh. You mean…? No! Yes.

Tell me the backlash against feminism isn’t crackling up a storm. I try to keep my eye on the big picture and the bottom line: education, employment, autonomy, power. Surely, I tell myself, the fact that half of all new med students are female is more important than Paris Hilton’s omnipresent visage; that a woman has made the first viable run for the presidency says more about the United States than that media clowns like Matthews basically call her a crazy castrating bitch on a daily basis; or that Caitlin Flanagan, smarmy enemy of working mothers (and another big believer in compulsory sex for wives), won a National Magazine Award for reviews and criticism.

But sometimes I think we’re truly going backward, as Republican hegemony, conservative Christianity and anti-feminist media propaganda take their cumulative toll. All those judges, all that money, all that shock jockery, all those magazines obsessively following stars’ weight and baby bumps: it would be strange if they had no effect. As far as concrete setbacks go, look no further than the case of Lilly Ledbetter, whose right to sue for pay discrimination was denied by the Supreme Court last May. In a 5-to-4 decision, the Justices overturned the standard interpretation of existing law to declare that Ledbetter was twenty years too late: the victim of pay discrimination must sue within six months of the initial discriminatory act–never mind whether she knew about it (many employers, including Ledbetter’s, forbid workers from discussing their salaries; she found out she was paid less than any man at her level from an anonymous tip).

Given the realities of life, the Court has given employers the nod to pay women less, as long as they can keep the women in the dark for 180 days. In April a bill to restore women’s right to sue failed in the Senate, 56-to-42, because for some reason everything now needs sixty votes to become law. John McCain said the bill would lead to too many lawsuits (hello? all it would have done was restore the law we’d lived with for forty-four years); what women needed was more “education and training.” Because right now, women are just too dumb to merit equal pay. As Dahlia Lithwick wrote in a coruscating piece in Slate, if women take this sitting down, maybe they really are dumb.

The suspicion that women are dim would explain why Oklahoma has just passed a law requiring not only that women seeking abortions be forced to view sonograms of their fetuses but that the picture be taken in the way most likely to reveal the clearest picture–often up their vaginas. In other antichoice news, an abortion ban will be on the ballot again in South Dakota, this time with narrow exceptions for rape and incest. And mark June 7 on your calendar–it’s Protest the Pill day, brought to you by the American Life League and other antichoice groups, which claim, despite the evidence, that “the Pill kills babies” by preventing implantation of fertilized eggs.

Maybe it’s good that the antichoice movement is outing itself as opposed to contraception, as prochoicers have long maintained and not many pundits have noted–but it also shows that they believe they can come out of the closet and not be dismissed as lunatics. Look for more struggles over government birth-control funding–already way down, thanks to budget cuts and inflation–as the antichoicers move the goal posts of how “life” is defined.

Yes, women are still making gains in education and–slowly–in politics and other areas. But longstanding feminist gains are eroding: battered women’s shelters, for example, are closing for lack of funds. And the advances haven’t made the difference once hoped for. There are more powerful female Hollywood executives than ever, but as Manohla Dargis pointed out in a splendid rant (her word) in the New York Times, the movies are relentlessly male-focused: the conventional Hollywood wisdom is “Women can’t direct. Women can’t open movies. Women are a niche.”

Culturally, there’s misogyny wherever you look: Grand Theft Auto IV, which offers players the opportunity to have sex with prostitutes and kill them, got rave reviews and is expected to have $500 million in sales its first week out. If there’s a pro-woman cultural event with that kind of reach and impact, I’d like to hear about it. It certainly wouldn’t be Vanity Fair’s photo of tween icon Miley Cyrus, clad in nothing but a bedsheet at all of 15 years old–or the daily media onslaught urging women to focus on their babies like a Zen master contemplating a rock–when not taking pole-dancing lessons, getting Botoxed or catching up on the latest “studies” purporting to prove that they lack the drive and brains to do anything better with their brief time on earth. Feminism, please call home!

This entry was posted in RagBlog and tagged Women. Bookmark the permalink.