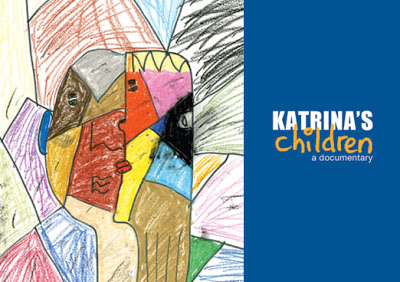 You cannot watch Laura Belsey’s movie without ruminating upon the myriad ways we fail our young.

There are many wrenching scenes in Katrina’s Children but arguably the most wrenching is not the girl crying because the hurricane left her so fearful of water she can no longer swim, or the boys touring the wreckage that once was home, or the children recalling how corpses floated by, writhing with maggots, bursting open. No, the most wrenching scene comes when Tyronieshia tries to read.

She pauses before the sign warning of penalties for bringing firearms onto the elementary school campus — yes, they need a ”no guns” sign at an elementary school — but she can’t read it. She struggles to do so, but it’s no use. She can’t decipher ”carrying,” can’t figure out “firearms.” 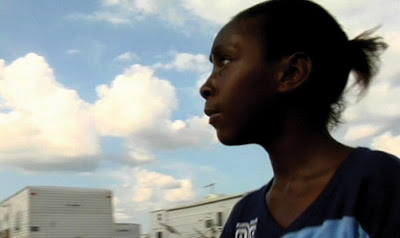 TYRONIESHA, 10, grew up in the St Bernard Projects and now lives in FEMA’s largest trailer park, Renaissance Village, near Baton Rouge. She believes that Katrina hit New Orleans “because the Devil told her to do it”.
Ten years old and she was already well on the way to illiteracy and the life of don’t have and can’t get that usually comes with it. And you realize, here is a child who was failed by her school, failed by her community, failed by her family. Then, three years ago this week, the storm came and she was failed by everything else.

Katrina’s Children is not coming soon to a theater near you. It can, however, be purchased online (http://www.katrinaschildren.com/). A portion of the proceeds go to help children’s programs in New Orleans.

See it if you can. It will claw at your heart.

There is no footage of the hurricane in it, no shots of rooftop rescues or chaos at the Superdome. There is no narration, no talking heads, virtually no adults whatsoever. Instead, there are the children, drawing pictures of the day their city drowned, telling how it feels to leave or lose everything you’ve ever known, walking you through the debris and the detritus, weeping, and wondering why it happened. They are white and black and one Vietnamese girl, children of various economic strata, some precocious and verbal, some so ill-spoken, so isolated from the mainstream, that their English requires subtitles.

All of them indelibly scarred.

”It was interesting when we screened the film for some of the parents and the kids,” says Belsey, the 42-year-old New York filmmaker who directed Katrina’s Children. “The parents were really moved. They had no idea the kids were thinking those thoughts. It just goes to show that if you take the time and pay attention and if you’re quiet enough . . . you hear things.”

But when are we that quiet?

We cry out at as the famous for nothing live their train wreck lives or the ballplayer runs for daylight or the TV news tells us about this week’s missing coed, but we fail to hear the quiet, painful sound of Tyronieshia trying to read.

Then a mammoth storm swallows an American city whole. And some of us cry out that liberals should not send help to a red state, or that God allowed the storm because New Orleans is too tolerant of homosexuals, or that this tragedy proves certain people are lazy and welfare-dependent. But we fail to hear Erica, who is 10, weeping because she saw babies die in the convention center’s heat and stench.

We forget that children are in the room sometimes. We push our agendas and assign our blame and impose our narratives and forget that they are right there, taking it in. Yet, if some of them were failed by schools, community and family, all were failed by the Army Corps of Engineers, the mayor, the governor, the emergency management director and the president. And don’t think they don’t know.

Maybe you take that as the cue to circle your wagons of race or politics. Well, Erica, who saw babies die, sees an imperative beyond that. She drew a picture, a mosaic of faces in rainbow colors, combining into a single image. A single destiny. With a little one’s gift for clarifying and purifying that which stymies and stupefies adults, she calls her drawing All In One.

And the prophet was right. A little child shall lead them.

This entry was posted in RagBlog and tagged American Society, Katrina. Bookmark the permalink.