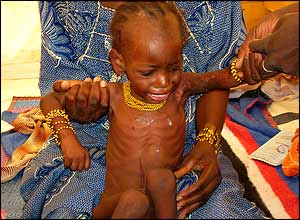 Rising food prices could spark worldwide unrest and threaten political stability, the UN’s top humanitarian official warned yesterday after two days of rioting in Egypt over the doubling of prices of basic foods in a year and protests in other parts of the world.

Sir John Holmes, undersecretary general for humanitarian affairs and the UN’s emergency relief coordinator, told a conference in Dubai that escalating prices would trigger protests and riots in vulnerable nations. He said food scarcity and soaring fuel prices would compound the damaging effects of global warming. Prices have risen 40% on average globally since last summer.

“The security implications [of the food crisis] should also not be underestimated as food riots are already being reported across the globe,” Holmes said. “Current food price trends are likely to increase sharply both the incidence and depth of food insecurity.”

He added that the biggest challenge to humanitarian work is climate change, which has doubled the number of disasters from an average of 200 a year to 400 a year in the past two decades.

As well as this week’s violence in Egypt, the rising cost and scarcity of food has been blamed for:

UN staff in Jordan also went on strike for a day this week to demand a pay rise in the face of a 50% hike in prices, while Asian countries such as Cambodia, China, Vietnam, India and Pakistan have curbed rice exports to ensure supplies for their own residents.

Read all of it here. The Guardian /UK / The Rag Blog

This entry was posted in RagBlog and tagged Environment, Poverty, Sustainability, The World. Bookmark the permalink.