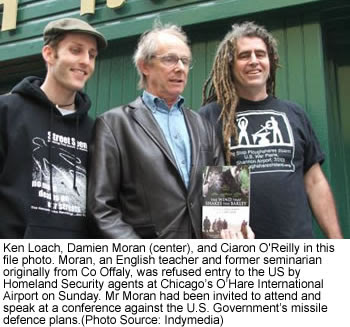 AN anti-war activist, who was acquitted of causing damage to a US military jet at Shannon Airport in 2003, has been deported from the United States.

27 year old Damien Moran, an English teacher and former seminarian originally from Co Offaly, was refused entry to the US by Homeland Security agents at Chicago’s O’Hare International Airport on Sunday. Mr Moran had been invited to attend and speak at a conference against the U.S. Government’s missile defence plans.

Currently working as an English teacher in Warsaw, Poland, in November 2006, Moran was acquitted along with 4 other anti-war activists of causing €2m worth of damage to a US Navy logistics warplane shortly before the outbreak of the Iraq War.

In the early hours of February 3rd 2003, Deirdre Clancy, Nuin Dunlop, Karen Fallon, Ciaron O’Reilly and Damien Moran entered a hangar at Shannon Airport and damaged the Navy jet. All five later went on trial at Dublin Circuit Criminal Court charged with two counts each of causing criminal damage worth €2m to the aircraft.

However, after their trial collapsed twice they were acquitted at a third hearing in 2006. The jury returned a unanimous ‘Not Guilty’ verdict on both charges in the cases of all five accused. The jury accepted defence evidence that the accused honestly believed they were acting to save lives and property in Iraq and Ireland, and that their disarmament action was reasonable taking into consideration all the circumstances.

Speaking about his deportation from the US, Damien Moran said: “I was immediately detained and questioned by Homeland Security officers about our non-violent and legal action at Shannon in February 2003. The information the border authorities claimed to have was, that I was arrested for damaging a U.S. fighter jet at Shannon. I let them know that their database was out of date and that it should also read acquitted as an Irish jury had decided unanimously we had a lawful excuse to help save life and property in Iraq.”

Mr Moran added, “My mobile phone was seized and I was interrogated about the purpose of my trip and why I had damaged US military property. I had been invited to speak at a university in Colorado Springs and at a conference in Omaha on US militarism in Poland and Ireland. Homeland Security’s unjustified refusal to allow me to enter the US and meet family, speak with US citizens is just another example of how quasi-fascist the U.S. State apparatus has become.”

Reacting to the news, leading Cork based anti-war activist Dr Fintan Lane said, “I’m not surprised. The US administration under Bush is utterly paranoid. I suppose at least they didn’t attempt to snatch Damien and transport him to their torture camp in Cuba. The sad irony, of course, is that Damien gets booted out of the US for engaging in a peaceful protest against war and mass murder, while every day hundreds of US gunmen are allowed through Ireland on their way to kill people in the Middle East.”

This entry was posted in RagBlog and tagged Censorship, Personal Freedom. Bookmark the permalink.