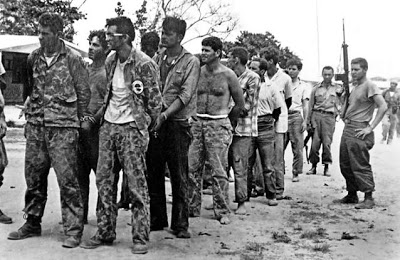 Bay of Pigs Invasion: A group of Cuban counter-revolutionaries, members of Assault Brigade 2506, after their capture in the Bay of Pigs. 1,000 people were imprisoned by Castro’s forces during the US supported invasion. Photo: Miguel Vinas/AFP/Getty Images.
Guatemala apologizes to Cuba for Bay of Pigs
By Andrea Rodriguez / February 17, 2009

HAVANA — Guatemalan President Alvaro Colom apologized to Cuba on Tuesday for his country’s having allowed the CIA to train exiles in the Central American country for the 1961 Bay of Pigs invasion.

“Today I want to ask Cuba’s forgiveness for having offered our country, our territory, to prepare an invasion of Cuba,” Colom said during a speech at the University of Havana. “It wasn’t us, but it was our territory.”

He added that he wished to apologize “as president and head of state, and as commander in chief of the Guatemalan army.”

About 1,500 Cuban exiles trained under CIA guidance in Guatemala before invading the island beginning April 17, 1961, in an unsuccessful bid to overthrow Fidel Castro’s communist government.

The invasion ended after less than three days, with about 100 invaders killed and more than 1,000 captured by Cuban forces.

Colom, whose government is considered center-leftist, said he was asking Cuba’s forgiveness as “a sign of solidarity and that times are changing,” and to “reaffirm my idea that Latin America is changing.”

At the height of the Cold War, the Guatemalan military government of Miguel Ramon Ydigoras Fuentes allowed the CIA to train an exile force in the rural province of Retalhuleu. Known as the 2506 Brigade and comprising mostly Miami-area Cuban exiles, the group was determined to overthrow Castro’s government — which had brought the Soviet bloc closer than ever to the continental United States by seizing power in Cuba 28 months before.

The invaders landed at Playa Larga at the innermost part of the Bay of Pigs, on the southern coast of central Cuba. The fighting later moved south, to Playa Giron, where Castro’s forces triumphed after less than 72 hours, when U.S. President John F. Kennedy failed to provide air support.

Colom said Tuesday that “Cuba deserves its own destiny, a destiny that you all built with this revolution of 50 years.”

“Defend it,” he said, referring to the guerrilla uprising that brought Castro to power on Jan. 1, 1959. “Defend it like you have always done.”

Like Cubans, Guatemalans harbor a deep resentment toward the United States for past violence. The CIA helped topple the democratically elected government of Jacobo Arbenz in 1954 and Washington backed a series of hardline military and civilian governments during that country’s 36-year civil war, in which 200,000 Guatemalans died or disappeared before peace accords were signed in December 1996.

During a visit to Guatemala in March 1999, President Bill Clinton said any U.S. support given to military forces or intelligence units that engaged in “violent and widespread repression” was wrong. “And the United States must not repeat that mistake.”

During Colom’s state visit to Havana, he awarded his country’s highest honor to Castro, though it was unclear if he would meet with the ailing, 82-year-old former president, who has not been seen in public since undergoing emergency intestinal surgery in July 2006.

The Guatemalan president’s was the latest in a string of recent visits to Havana by regional leaders, including Panama’s Martin Torrijos and Rafael Correa of Ecuador.

Fidel Castro, who ceded power to his younger brother Raul about a year ago, met with two other visiting Latin American presidents, Cristina Fernandez of Argentina and Chile’s Michelle Bachelet. Photographs of him with each of the presidents were later released by their respective governments, and a series of photos featuring Castro and Bachelet appeared in Cuba’s communist newspaper Granma on Tuesday.

This entry was posted in RagBlog and tagged Cuba, Cuban Exiles, Guatemala. Bookmark the permalink.

1 Response to Guatemala Apologizes for Bay of Pigs Training