Police repression and ideological mystification are the glues that maintain structural violence. 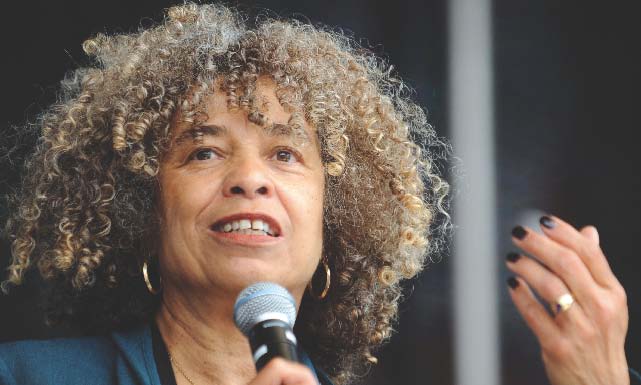 CHICAGO — It was inspiring and informative attending the rally with Angela Davis and the celebration of the lifelong political work of Charlene Mitchell, the founder of the National Alliance Against Racist and Political Repression (NAARPR). The rally and award ceremony honoring Davis and Mitchell capped a two-day National Forum on Police Crimes at the University of Chicago.

The National Forum held workshops highlighting police crimes against undocumented and other immigrant workers, the labor movement and all workers, the LGBTQ community, women, peace, and solidarity activists, and people of color.

Central themes reflected in the workshops and the rally included the current condition of police misconduct in the United States, an analysis of the fundamental role of the police and incarceration in the United States, the interconnectedness of forms of repression and the struggles against them, and the twin roles of repression and ideology as the glues holding together a global political economy in crisis. Last, the celebration of the 41 years of the NAARPR illustrated the possibilities of struggle and victory.

The call for the National Forum highlighted the contemporary crises of civil rights and civil liberties including:

Several speakers during the rally made it clear that the primary purpose police forces play in the United States is to protect the stability of the existing economic and political system. In short, the police in virtually every community serve the interests of what Occupiers call the one percent in opposition to the 99 percent.

While laws and police often come to the aid of aggrieved members of communities, their primary function is to protect the unequal distribution of wealth and income and political power. The physical presence of police, with larger numbers in poor and Black and Brown communities than others, constitutes a threat to the physical survival of people, particularly young men. For most people in poor communities of color, the police represent an occupying power.

Police repression in the United States is embedded in the history of slavery, institutionalized racism, the legitimized use of violence, and the interconnectedness of violence against African-Americans, Latinos, women, gays, transgender people, and workers.

Further, police repression on a global basis serves to impose policies in keeping with neoliberal globalization, including the privatization of public institutions, cutting back on social safety nets, opposing demands by low-wage workers for economic justice, and extracting larger shares of the value of the labor of workers.

Since the embrace of neoliberal policies virtually everywhere in the world, economic inequality has grown dramatically. With growing protest activities, police and military repression has increased as well.

Speakers suggested that the criminal justice system — the police, prisons, and laws restricting political participation — is a form of direct violence.

Speakers suggested that the criminal justice system — the police, prisons, and laws restricting political participation — is a form of direct violence that is seeking to create pliant behavior by force or the threat of force. Further, the criminal justice system is an instrumentality of structural violence; protecting the various forms of exploitation and oppression embedded in the society at large.

In addition it is replicated in the broader culture. Mass media romanticize police behavior, courts of law, even vigilante forms of violence. Police programs, the portrait of scientists engaged in uncovering crimes, and even police comedies pitting bungling but wise police investigators against incorrigible criminals give credence to the necessity of police, prisons, oppressive laws, and the need for order. Consumers of pop culture are rewarded for their willing acceptance of the systems of control as they exist for an hour or two of entertainment. Besides, most people think, what are the alternatives to armed police, laws, prisons, and the right-to-bear arms?

The National Alliance Against Racist and Political Repression successfully struggled to free Angela Davis and many others falsely incarcerated and inspired mobilizations of activists everywhere to protest police violence, prisons, the death penalty, and Stand Your Ground laws. The Alliance in Chicago continues the struggle and has demanded civilian control of the police.

Angela Davis posed the vision of an unarmed police force administered by the community and the elimination of prisons entirely. While these proposals cannot be achieved in the short run, she and the Alliance believe, as the World Social Forum suggests, “Another World is Possible.” To make these visions reality they say, “a multi-racial, multi-national and multi-cultural broad-based movement” is needed to create “united democratic action.”