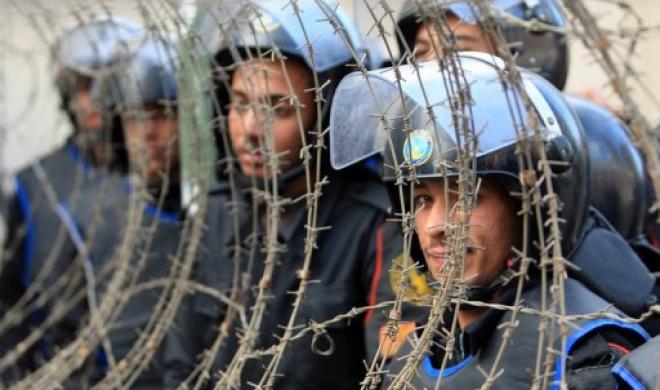 Within Egyptian society, the U.S. government-funded Egyptian military has exercised a special economic and political influence for many years. As James Gelvin’s 2012 book, The Arab Uprising: What Everyone Needs To Know, recalled:

Egypt is the Arab world’s most populous country, with an official population of 81 million and an estimated population of up to 100 million (because of conscription, not all families register the birth of their sons)… The Egyptian military…is huge. The army alone includes 900,000 men (including reservists)… The United States…has given it $1.3 billion annually since 1979…

Economists estimate that the military controls anywhere from 5 to 40 percent of the economy, and according to the IMF the military oversees about half of all Egyptian manufacturing… Over time the military has become involved in everything from construction and manufacture of consumer durables (like washing machines and refrigerators) to defense production and dairy and poultry farming. In addition, since many military bases are on Egypt’s coasts and along the Nile, the military has had access to prime real estate ripe for development…

Between its removal of Mubarak as Egypt’s president on February 11, 2011, and January 2012, Egypt’s Supreme Council of the Armed Forces [SCAF] was “the sole authority” in Egypt “with the power to amend or approve amendments to existing laws, and issue or approve new ones,” and people in Egypt “experienced many of the same human rights abuses that characterized Mubarak’s police state” which the SCAF justified “by noting that they [were] authorized under existing laws,” according to a Human Rights Watch press release of January 2012.

Under SCAF leadership, excessive use of force and extrajudicial killings, torture, attacks on peaceful protests, and arbitrary arrests of bloggers and journalists have become commonplace and illustrate how little has changed… Military prosecutors have sentenced or summoned dozens of activists and journalists for “insulting the military” or “spreading false information.”…

The SCAF promised to lift the state of emergency, in effect continuously for the past 30 years. But on Sept. 10 [2011] the SCAF expanded its scope of application beyond its use under Mubarak… Military courts have tried over 12,000 civilians in the past year.

The SCAF also has passed new laws under the state of emergency, such as Law 34 “On the Criminalization of Attacks on Freedom of Work and the Destruction of Facilities,” which criminalizes and imposes financial penalties for strikes and demonstrations that “obstruct public works.”…

According to The Arab Uprising, the Egyptian military “much preferred stability to reform” and “Egypt’s rulers dragged their feet on some of the uprising’s central demands (including prosecution of the Mubaraks and lifting the state of emergency) and took a confrontational stance toward workers who continued their strike wave as well as protesters who continued their demonstrations.”

The same book also noted that “the military continued to use torture against those who ‘disturbed the peace,’ attempted to intimidate women protesters by forcing them to undergo `virginity tests’ while detained, and, in an obvious warning to others, sentenced a blogger to prison for 3 years for criticizing the military…”