The Post calls for a return to the post-World War II global policy that benefited banks, multinational corporations, and the military-industrial complex. 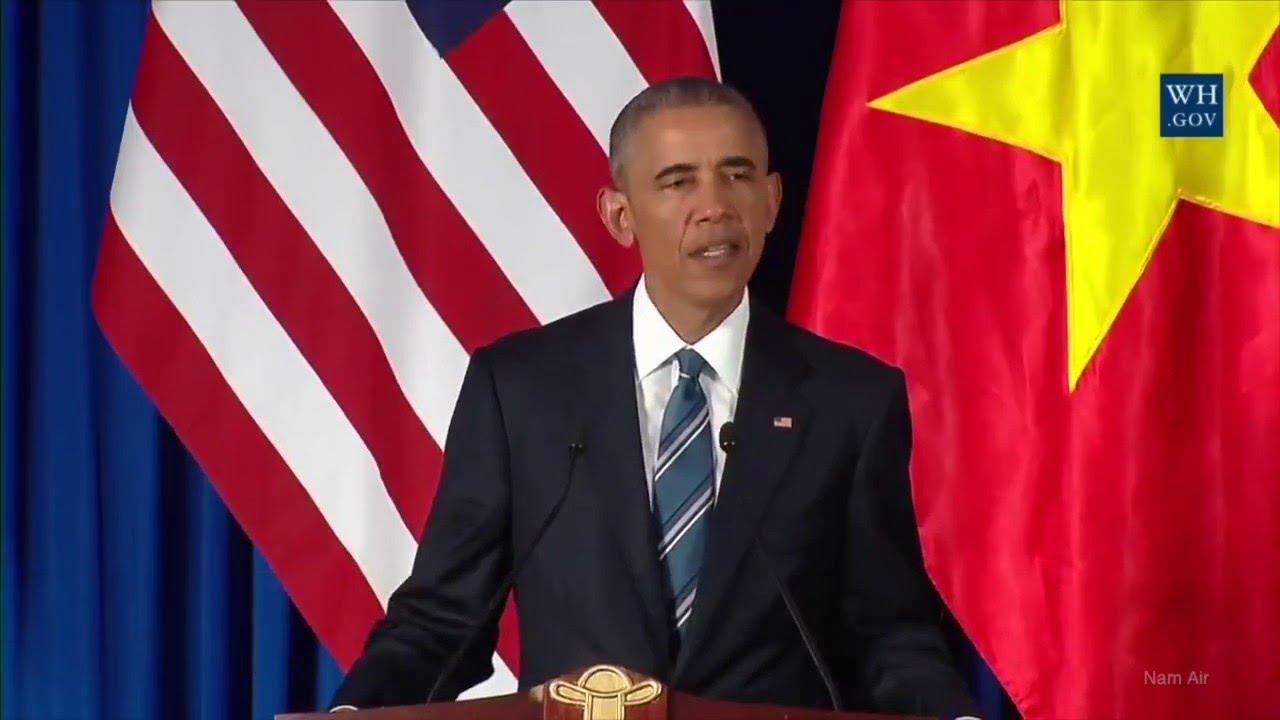 Obama declared an end to the longstanding U.S. arms embargo during his visit to Vietnam. Screen grab from YouTube / Creative Commons.

HARDLY A day goes by without evidence that the liberal international order of the past seven decades is being eroded. China and Russia are attempting to fashion a world in their own illiberal image… This poses an enormous trial for the next U.S. president. We say trial because no matter who takes the Oval Office, it will demand courage and difficult decisions to save the liberal international order. As a new report from the Center for a New American Security points out, this order is worth saving, and it is worth reminding ourselves why: It generated unprecedented global prosperity, lifting billions of people out of poverty; democratic government, once rare, spread to more than 100 nations; and for seven decades there has been no cataclysmic war among the great powers. No wonder U.S. engagement with the world enjoyed a bipartisan consensus.

The Washington Post editorial quoted above clearly articulates the dominant view held by U.S. foreign policy elites for the years ahead. It in effect constitutes a synthesis of the “neocon” and the “liberal interventionist” wings of the ruling class. In my judgment, with all our attention on primaries, who goes to which bathrooms, and other mystifications, a New Cold War is being planned. Only this time it will have even greater consequences for global violence and devastation of the environment than the first one.

The Post vision of a New World Order built upon a reconstituted United States military and economic hegemony has been a central feature of policymaking at least since the end of World War II, even though time after time it has suffered setbacks: from defeat in Vietnam, to radical decolonization across the Global South, and to the rise of competing poles of power in Asia, the Middle East, Latin America, and even Europe.

Mobilizations against neoliberal globalization and austerity policies have risen everywhere.

And despite recent setbacks, grassroots mass mobilizations against neoliberal globalization and austerity policies have risen everywhere, even in the United States. The Washington Post speaks to efforts to reassemble the same constellation of political forces, military resources, and concentrated wealth, that, if anything, is greater than at any time since the establishment of the U.S. “permanent war economy” after the last World War.

Recent U.S. diplomacy illustrates the application of the vision. President Obama remains committed to trade agreements that will open the doors in every country to penetration by the 200 corporations and banks that dominate the global economy. He continues to expand military expenditures and to authorize the development of new generations of nuclear weapons (at the same time as he visits the site of the dropping of the first atomic bomb at Hiroshima). He engages aggressively in words, deeds, and provocative military moves against Russia and China.

Also, he recently visited Cuba, proclaiming the willingness of the United States to help that country shift its economic model to “free market” capitalism and “democracy.” He then traveled to Argentina to give legitimacy to President Macri, recently elected advocate of that country’s return to the neoliberal agenda. Meanwhile the United States encourages those who promote instability in Brazil, Venezuela, Bolivia, and Honduras and offers continuing support to the long-term violent politics of Colombia.

During the President’s visit to Vietnam, he declared an end to the longstanding U.S. arms embargo against that country and he warmly supports that country’s incorporation into the Trans Pacific Partnership. He hopes to construct a military coalition against China, even while criticizing Vietnam’s record on human rights. After Vietnam, Obama traveled to Hiroshima at a time when new militarist currents have become more popular in Japan and while U.S. troops continue to engage in violent behavior against citizens of Okinawa, where the U.S. has a military base. In addition, U.S. naval vessels patrol the South China Sea.

He shored up ties with Saudi Arabia that are a centerpiece of Middle East/Persian Gulf policy.

These trips have been paralleled by the President’s historic trip to the Persian Gulf earlier this year, shoring up the ties with Saudi Arabia that have been a centerpiece of Middle East/Persian Gulf policy since President Roosevelt negotiated a permanent partnership with that country in the spring of 1945.

President Obama has resumed a slow but steady escalation of “boots on the ground” in Iraq, continued support for rebels fighting ISIS and at the same time the government of Syria. And to carry out the mission of reconstituting U.S. hegemony drone strikes and bombing missions target enemies in multiple countries in the Middle East and North Africa.

The increasing contradictions of finance and industrial capital grow on a worldwide basis and masses of people in many countries are standing up against the imposition of austerity policies. Also it is becoming clearer to all classes that the natural environment is in peril. But The Washington Post calls for a return to the U.S. global policy that emerged after World War II and which benefited banks, multinational corporations, and the military-industrial complex as millions of people died in war. Only this time, the U.S. imperial model is less likely to succeed, irrespective of the results of the November 2016 election.