Harry Targ :
What gives me hope about this ‘Enough is Enough’ movement

These young people have begun to ‘teach their parents well.’ 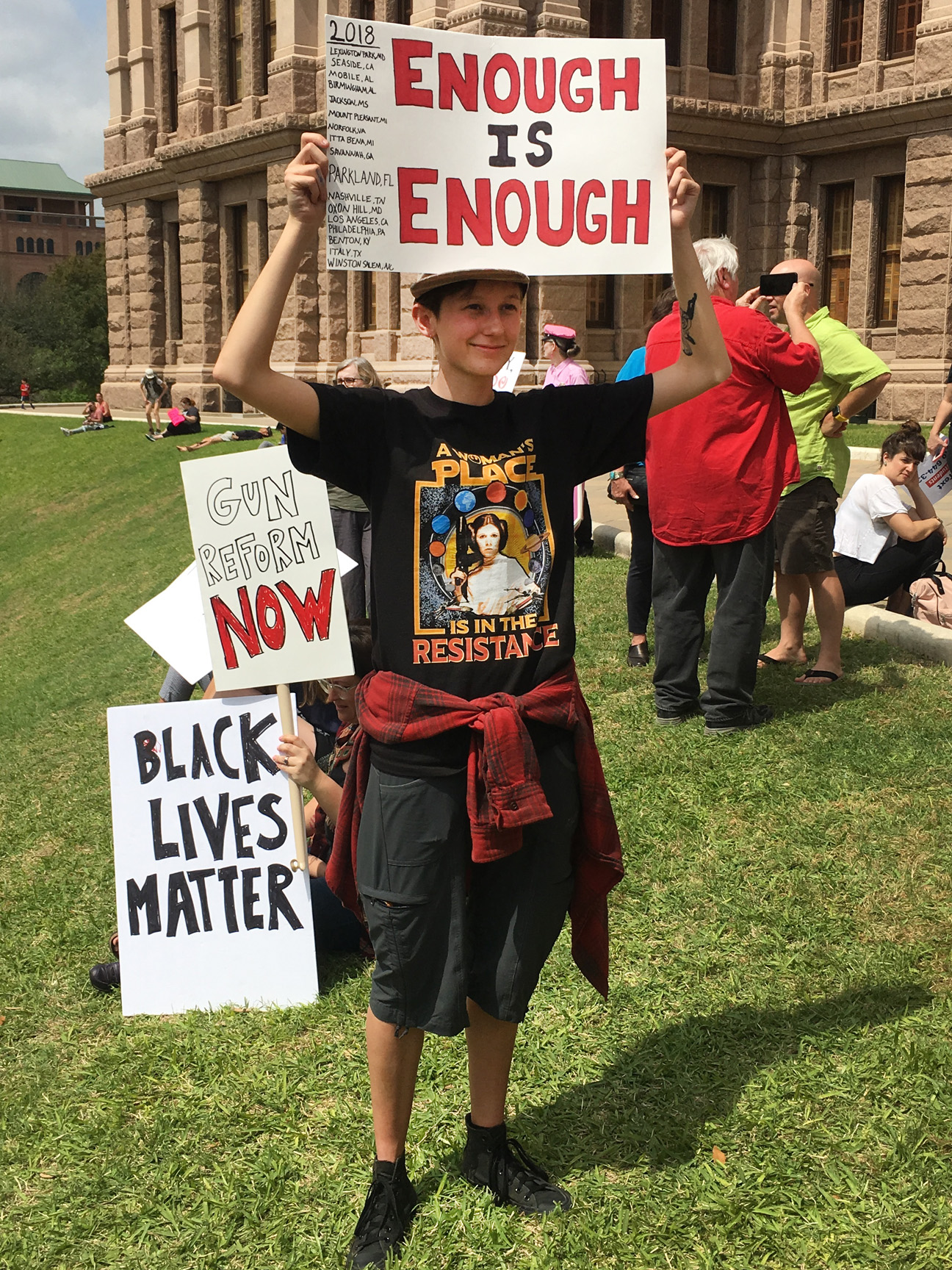 March for our Lives rally in Austin, Texas, March 24, 2018. Photo by James Retherford / The Rag Blog.

I experienced the new youth movement following the Parkland massacre vicariously: through television, radio, and social media. I stayed at home Saturday, March 24, periodically sampling the television accounts of the massive rallies all over the country and the world against guns, gun violence, and the gun manufacturers and their lobbyists who prey on the celebration of fear and violence. I even shed a tear when I saw one placard with the sign “teach your parents well.”

While I have had bursts of enthusiasm before when women marched for their rights, masses mobilized against war, and many stepped up to say no to police violence and mass incarceration, I was touched emotionally even more this time around. On reflection, I think, my optimism, my interest in being involved, and my sense of purpose has been energized by several features of this new movement.

First, this movement was not organized around “identities.” While the student organizers of the rally purposefully incorporated how people of color, women, and lower income students experience violence differently in their lives, the central focus was on the general issues of guns and gun violence. Individual youth organizers then spoke from their own experiences.

Second, the students, again consciously, avoided all sectarianism. While there were clear messages about profit-making corporations, lobby groups, self-serving elected officials, and the uses to which elections were put, they did not explicitly address the role of capitalism and class, race, and gender. They made it clear that elections matter. They avoided the debate about whether people should support one or the other of the major political parties or build a third party. They had organized in 800 cities and towns to say “Enough is Enough” about gun violence, not to raise issues of theory and practice that often divide older activists.

Third, the students had a direct, immediate issue-oriented agenda; that is the regulation of the ownership, sale, and use of firearms in society. Although spokespersons from Parkland and elsewhere beautifully grounded their advocacy in broader systemic, structural arguments about why they are mobilizing, they presented a modest but significant set of policy goals that they wished to achieve.

Fourth, the young people who organized the marches and rallies presented a practical plan to achieve their immediate goals. They urged those who were old enough to vote, to do so in the 2018 elections. Those who were going to become of voting age, they proposed, should register to vote. And all young people should encourage others to register and vote.

Fifth, all young people were urged to participate in the electoral arena. Activists called on youth to establish litmus tests for each candidate from local to national office on gun issues. And, where possible, participants in rallies were urged to run for office. And young people were advised to reject the argument that “you are just a kid… you don’t have the experience or knowledge to hold public office.”

Sixth, all the emerging youth spokespersons from Parkland, Chicago, Los Angeles, and elsewhere made it clear that they were not leaders in the traditional sense but facilitators of an organically charged mass movement. All students from Parkland who were interviewed indicated that they were not speaking for and about themselves. They saw themselves as part of a generation that is demanding the right to be free of the threat of being a target of violent death.

Seventh, spokespersons for this mass mobilization promise that “this is just the beginning.” One gets the sense from the passion, the collective solidarity, the proposed plan of action, and the specific goals articulated all across the country that a new movement has been born. This movement might transform itself from its singular commitment to controlling gun violence to a broad-based social movement for justice and democracy.

These “generation Z’ers” will continue to build from their extraordinary uprising. For now they have set themselves and the nation on a new path that should give us hope and direction. By their actions so far, they have begun to “Teach Your Parents Well.”

This entry was posted in RagBlog and tagged Gun Violence, Guns, Harry Targ, March for Our Lives, Rag, Rag Bloggers. Bookmark the permalink.