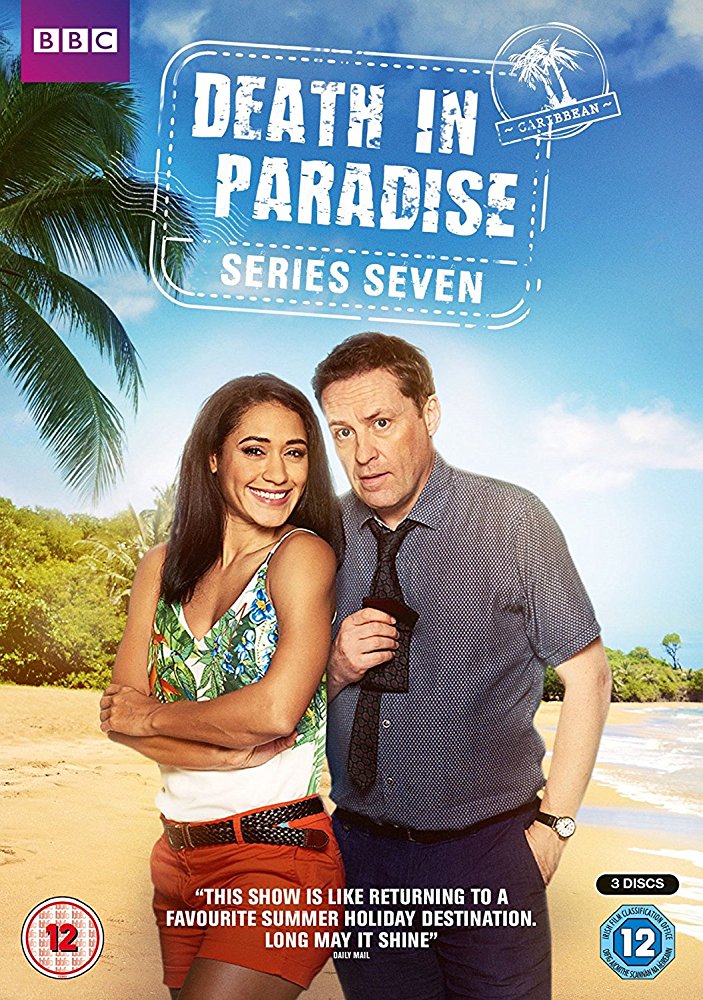 For the past eight years a nice little murder mystery series, Death in Paradise, has been piling up corpses on a fictional Caribbean island. So far 56 episodes (seven seasons) have unspooled on the exotic French tropical isle of St. Marie, filmed on Guadeloupe. The series began airing in 2011 with Ben Miles as the British chief detective. In Season 4 he was replaced by lanky Kris Marshall and then again in Season 6 by Irish comic Ardal O’Hanlon (playing it straight).

The first four seasons are available on Netflix Instant streaming. The first seven are on YouTube — some for free and some for a fee. This one is gratis.

These are cozy mysteries, where at the end the detective gathers all the suspects and then unmasks the killer. This is a British-French crime drama created by Robert Thorogood and featuring a fun Anglo-French cast playing island cops. It has consistently enjoyed high ratings. Season 4 (2015) averaged 9.03 million viewers. Each episode was among the top three most-watched programs of the day in the U.K. and in the top 10 most-watched programs of the week. An eighth season has been ordered, with O’Hanlon returning. The series airs in France, Canada and Australia.

British detective Richard Poole (Ben Miller, whose 70 credits include Paddington 2, Johnny English, and The Armstrong and Miller Show) is assigned to investigate the murder of a British police officer on the fictional French Caribbean island of Saint Marie. After he successfully finds the murderer, he is reluctantly required by his supervisors to replace the victim and stay on as the detective inspector of the island, solving new cases as they appear, and being the butt of many fish-out-of-water jokes.

At the start of Series 3, Poole is killed and London detective Humphrey Goodman (Kris Marshall; 42 credits including Murder City, Love Actually, and Death at a Funeral) arrives to investigate the death of his strait-laced predecessor. He then stays in the job as chief investigator on the island. In the second half of Series 6, he resigns so he can stay in London with his new girlfriend, and his replacement is DI Jack Mooney, played by Ardal O’Hanlon (brilliant in Father Ted, My Hero, and 26 other films and series).

Saint Marie is a British Overseas Territory, but about 30% of its people are French, due to previous history, with the language still widely spoken. The backstory appears to be a blend of two real islands near to Guadeloupe, with size and location aligning with Marie-Galante and history and language aligning with Dominica.

The series earned thumbs up from more than 94.1% of 9,239 imdb viewers. It was big with all demos, especially females 30 and older and 18 and younger.

Victims include a nun, a rock musician, two treasure hunters, a cosmetician, a horror movie actress, a gigolo, several tourists, a stewardess, a surf instructor, a volleyball star, the outgoing island governor, a chef, and dozens more.

Normally, each episode ends with a comedic scene or a celebratory trip by the police force to Catherine’s bar. The final episode of most series has included a subplot wherein the lead DI is tempted to return to the UK by the prospect of a job offer or personal relationship, but in the end, he decides to remain on the island.

Death in Paradise has remained one of the U.K.’s top three series. The Caribbean locales are delightful, the cast is fun and the mysteries are entertaining. We usually fail to guess the murderer.