Health Care Reform : A Bad Proposal or a Worse One? 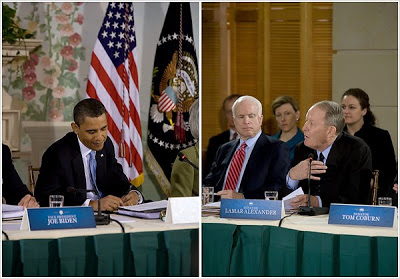 Senator Alexander, sitting next to Senator McCain, provided the Republicans’ opening statement at the Health Care Forum at Blair House, and he challenged President Obama and the Democrats “to renounce jamming it through in a partisan way.” Photo: Stephen Crowley/The New York Times.
Corporate Restructuring of Healthcare
Fails the American People

At the President’s Healthcare Summit today, the American people witnessed a debate between the bad proposal for healthcare reform and the even worse one. The Democrats’ House and Senate bills fail to address the growing problems of for-profit healthcare. Instead, by mandating the purchase of healthcare, their plan will create a profitable market for private health insurance companies to exploit.

The Republicans’ counter-proposal, which seeks to allow consumers to buy insurance plans across state lines, would reverse decades of necessary reforms carried out at the state level. This would give mega-healthcare corporations a free-hand to expand their already abusive practices.

While the two parties squabble about how to carry out the corporate restructuring of healthcare, the American people continue to suffer under a for-profit healthcare system. 50 million people are uninsured, another 20 million underinsured and nearly 50,000 people die each year from preventable illnesses. In response, millions of Americans have begun to avoid healthcare — a recent survey indicates that six out of 10 have either deferred or delayed necessary care in the last year.

A fundamental political shift in the healthcare debate is necessary. Instead of a discussion of how markets should operate or how to build the proper risk pool to insure profits, we should be examining how to recognize healthcare as a basic human right.

Simply put, healthcare should not be treated as a commodity. Private health insurers provide no medical benefit to the people they cover. They merely extract profits from the doctor-patient relationship. Instead, we should create a comprehensive medical system that guarantees no-charge access and the provision of all medically necessary care.

Near the end of today’s summit, President Barack Obama asked “Can America, the wealthiest nation on earth, do what every industrialized country in the world does?” As a socialist, my answer is yes, but it will not come from the Democratic or Republican proposals. Instead, a single-payer National Healthcare Program would provide universal access for all people in America. Such a program would pave the way for the creation of a fully-socialized medical system that would ensure healthcare as a human right.

The time for high-level summits and backroom wrangling among politicians who have received large-scale contributions from private insurers and pharmaceutical companies has ended. It is now time for the creation of a mass social movement that expresses the desires of everyday Americans for a medical system organized around the values of solidarity, compassion, and justice. Rejecting both the Democratic and Republican proposals will be a key part of this process.

3 Responses to Health Care Reform : A Bad Proposal or a Worse One?