It’s a fine tale of a product development project that unfolds in secrecy, in a mild paranoia born of corporate competition. 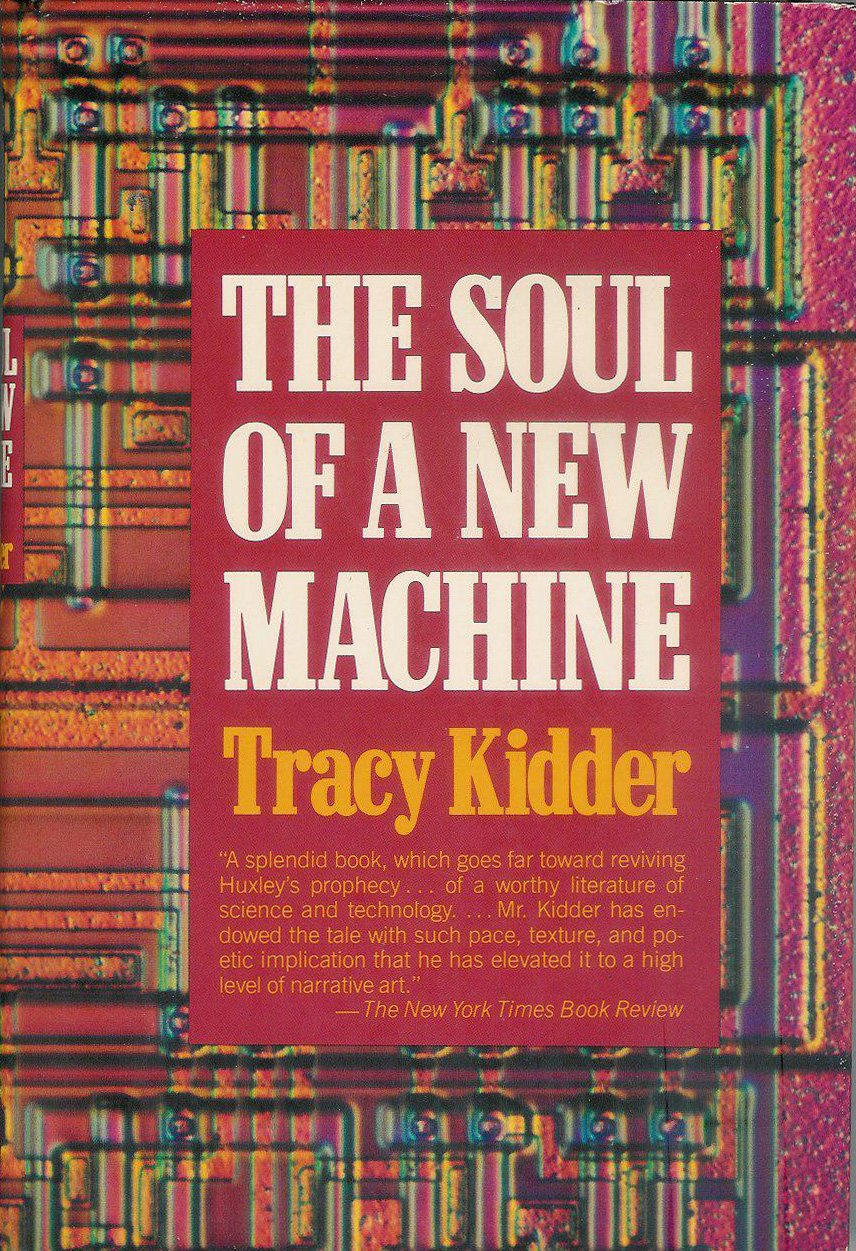 Hands, that the rod of empire might have sway’d
Or wak’d to ecstasy the living lyre
Instead copy’d some things already made
And squander’d thus their own creative fire
—Gray/Mecredy

This Pulitzer-winning 1981 book is a delightful account of the development of an electronic product by a design team in the late seventies, at a now-defunct company called Data General. It’s a fine tale of a product development project that unfolds in secrecy, haste, and a kind of mild paranoia born of corporate competition.

Product development work is exhilarating. It’s a stroke of luck to be on a development team, with a bunch of people all working toward a definite goal, gradually creating a product. Kidder wonderfully conveys this excitement.

It’s surprising, though, how many projects are cancelled. One of Kidder’s characters has worked on a series of 10 or so development projects without having seen one go “out the door” into production. Reassessments of the competitive situation, loss of confidence in the team or its management, a corporate leadership coup, changes in the external world of finance for example can — well, sink your ship before it ever gets off the ground, as a VP once ominously announced to my engineering group. A lot of talent goes to waste.

Kidder brings out a sense of tenuousness, of instability in the project and associated jobs.

Kidder brings out this sense of tenuousness, of instability in the project and the associated jobs. In fact the ultimate success of this program leads Data General to cancel a similar, rival project, so the poor yokels working on that project are thrown into uncertainty.

Hovering in the background is an existing, successful product from another now-defunct company called Digital Equipment Corporation. In fact, both DG and DEC are among a swarm of entities attempting to capitalize on semiconductor technology in the infancy of the computer age. “[A]round the time when Data General established itself… other entrepreneurs were starting up minicomputer companies at the rate of about one every three days.” (p21)

“In every segment of the industry, companies announced small new products for sale every day. Companies brought out new lines of computers, much more powerful than the ones they replaced, only every few years or so, but considering all the work that went into them and the fact that they required a redirection of effort throughout a company, the pace at which these major announcements came was very rapid too” (p34)

Since in order to maximize the potential return on their investments all of these companies must act in secret, and since the range of actual useful applications of the technology of the moment is narrow, much duplication of effort takes place. The Data General team is hoping to essentially copy the performance of the briskly-selling Digital Equipment product. In an important sense therefore their effort is at least partially wasted whether their product performs as desired or not, and whether it sells as desired or not, since the best that can be hoped is that it will fill a part of the niche of the prior device.

So, in one of the absurdities brought about by the normal workings of our economy, not only were these engineers and technicians working on a computer, but so were a number of other teams of engineers and technicians, laboring secretly in various laboratories to create a socially useful product. Or rather to create a whole bunch of functionally interchangeable products, all based on the same technology, none more socially useful than another, and all of them diminished by the duplication.

They were employed in an almost childish effort to duplicate the work of their peers.

These engineers in their era were schooled and experienced in an enormously important new field, and yet they were employed in an almost childish effort to duplicate the work of their peers. Kidder takes for granted the environment of rivalry, at times alluding to it in almost sportswriter’s terms — which in fact reflects popular discourse.

It is as though labor were too cheap. Only as they are able to hire teams of highly-trained people and still profit mightily from the result are people with money to invest able to engage in this little dramatic gambling game. Only as this kind of work — or work in general — is seen as a valuable social good in its own right can our society restructure itself to stop squandering the investment it makes in the populace in honor of a warped concept of competition.

It makes a person wonder in what ways such a development project might be different if carried out in the open; if the product specifications, the engineering team’s composition and approach, the proposed technical solutions, the prototypes and their performance, the pilot runs and the product introduction were all open to public scrutiny and control.

Soul was well-received. Samuel Florman’s upbeat review helped to launch the book… and contains a telling observation: “The most elegant technical solution is worth nothing if the end product is not used.” To which might be added, “or is worth less if it is only one of several solutions to the same problem.” (Quote from Samuel Florman, New York Times, August 23, 1981.)