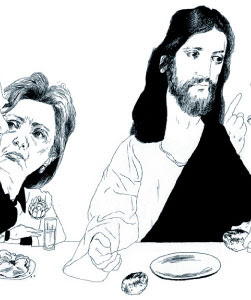 There’s a reason Hillary Clinton has remained relatively silent during the flap over intemperate remarks by Barack Obama’s former pastor, Jeremiah Wright. When it comes to unsavory religious affiliations, she’s a lot more vulnerable than Obama.

You can find all about it in a widely under-read article in the September 2007 issue of Mother Jones, in which Kathryn Joyce and Jeff Sharlet reported that “through all of her years in Washington, Clinton has been an active participant in conservative Bible study and prayer circles that are part of a secretive Capitol Hill group known as “The Fellowship,” also known as The Family. But it won’t be a secret much longer. Jeff Sharlet’s shocking exposé The Family: The Secret Fundamentalism at the Heart of American Power will be published in May.

Sean Hannity has called Obama’s church a “cult,” but that term applies far more aptly to Clinton’s “Family,” which is organized into “cells”–their term–and operates sex-segregated group homes for young people in northern Virginia. In 2002, Sharlet joined The Family’s home for young men, forswearing sex, drugs and alcohol, and participating in endless discussions of Jesus and power. He wasn’t undercover; he used his own name and admitted to being a writer. But he wasn’t completely out of danger either. When he went outdoors one night to make a cell phone call, he was followed. He still gets calls from Family associates asking him to meet them in diners–alone.

The Family’s most visible activity is its blandly innocuous National Prayer Breakfast, held every February in Washington. But almost all its real work goes on behind the scenes–knitting together international networks of right-wing leaders, most of them ostensibly Christian. In the 1940s, The Family reached out to former and not-so-former Nazis, and its fascination with that exemplary leader, Adolf Hitler, has continued, along with ties to a whole bestiary of murderous thugs. As Sharlet reported in Harper’s in 2003:

During the 1960s the Family forged relationships between the U.S. government and some of the most anti-Communist (and dictatorial) elements within Africa’s postcolonial leadership. The Brazilian dictator General Costa e Silva, withFamily support, was overseeing regular fellowship groups for Latin Americanleaders, while, in Indonesia, General Suharto (whose tally of several
hundred thousand “Communists” killed marks him as one of the century’s most murderous dictators) was presiding over a group of fifty Indonesian legislators. During the Reagan Administration the Family helped build friendships between the U.S. government and men such as Salvadoran general Carlos Eugenios Vides Casanova, convicted by a Florida jury of the torture of thousands, and Honduran general Gustavo Alvarez Martinez, himself an evangelical minister, who was linked to both the CIA and death squads before his own demise.

At the heart of The Family’s American branch is a collection of powerful right-wing politicos, who include, or have included, Sam Brownback, Ed Meese, John Ashcroft, James Inhofe and Rick Santorum. They get to use The Family’s spacious estate on the Potomac, The Cedars, which is maintained by young men in Family group homes and where meals are served by The Family’s young women’s group. And, at The Family’s frequent prayer gatherings, they get powerful jolts of spiritual refreshment, tailored to the already powerful.

Clinton fell in with The Family in 1993, when she joined a Bible study group composed of wives of conservative leaders like Jack Kemp and James Baker. When she ascended to the Senate, she was promoted to what Sharlet calls the Family’s “most elite cell,” the weekly Senate Prayer Breakfast, which included, until his downfall, Virginia’s notoriously racist Senator George Allen. This has not been a casual connection for Clinton. She has written of Doug Coe, The Family’s publicity-averse leader, that he is “a unique presence in Washington: a genuinely loving spiritual mentor and guide to anyone, regardless of party or faith, who wants to deepen his or her relationship with God.”

Furthermore, The Family takes credit for some of Clinton’s rightward legislative tendencies, including her support for a law guaranteeing “religious freedom” in the workplace, such as for pharmacists who refuse to fill birth control prescriptions and police officers who refuse to guard abortion clinics.

What drew Clinton into the sinister heart of the international right? Maybe it was just a phase in her tormented search for identity, marked by ever-changing hairstyles and names: Hillary Rodham, Mrs. Bill Clinton, Hillary Rodham Clinton and now Hillary Clinton. She reached out to many potential spiritual mentors during her White House days, including New Age guru Marianne Williamson and the liberal rabbi Michael Lerner. But it was the Family association that stuck.

Sharlet generously attributes Clinton’s involvement to the under-appreciated depth of her religiosity, but he himself struggles to define The Family’s theological underpinnings. The Family avoids the word Christian but worships Jesus, though not the Jesus who promised the earth to the “meek.” They believe that, in mass societies, it’s only the elites who matter, the political leaders who can build God’s “dominion” on earth. Insofar as The Family has a consistent philosophy, it’s all about power–cultivating it, building it and networking it together into ever-stronger units, or “cells.” “We work with power where we can,” Doug Coe has said, and “build new power where we can’t.”

Obama has given a beautiful speech on race and his affiliation with the Trinity Unity Church of Christ. Now it’s up to Clinton to explain–or, better yet, renounce–her long-standing connection with the fascist-leaning Family.

1 Response to Hillary Clinton and Her Secretive Religious "Fellowship"