Great idea, but this is definitely a post-revolution happening. At the least, I have mailed this article to my member of Congress and both Senators, telling them I believe this is a proposal that reflects true justice. We’ll see what comes of that!! 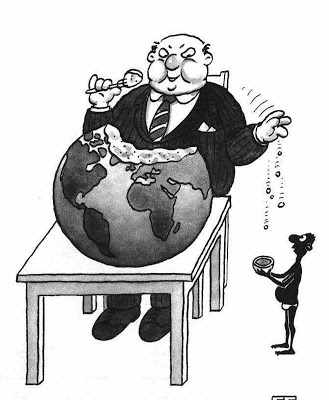 A law should be immediately passed that imposes a new special federal income tax of 99 percent on all income in excess of $500,000 annually for single taxpayers and $1 million for couples, starting for 2008 income. Call it a greed tax.

By now most Americans have experienced extreme disgust upon hearing about the nearly $20 billion in bonuses given to people in New York City’s financial sector at the end of 2008. After sending the nation into the current economic black hole there is no way of comprehending the audacity of financial company executives in giving themselves and their colleagues shameful rewards for abysmal and disgraceful performance. Other than screaming and moaning about all this dishonorable behavior what should the Obama administration and Congress do?

Here is the solution that the overwhelming majority of Americans should demand: A law should be immediately passed that imposes a new special federal income tax of 99 percent on all income in excess of $500,000 annually for single taxpayers and $1 million for couples, starting for 2008 income. Call it a greed tax. Call it justice. Call it getting even for too many years of uncontrolled greed that has given the nation nothing but economic injustice and inequality, and given capitalism a very bad name. Call it a sensible way to raise federal revenues to help offset the cancerous national debt.

Considering that nearly all of the people who received the 2008 bonuses also received high salaries and even larger bonuses in previous years, and the many billions of dollars of federal dollars going into bailouts of companies, there should be no qualms about such a greed tax. For example, in the two previous years a total of about $70 billion in bonuses were received by these greedy financial sector elites.

Even outside the financial sector, executives also received obscene bonuses in 2008 despite terrible performance. The compensation research firm Equilar, for example, reports that the average performance-based bonuses for top executives, other than the chief executive, at 132 companies with revenues of more than $1 billion increased by 14 percent, to an average of $265,594, in the 2008 fiscal year, in addition to high salaries.

As just one of countless examples of greed, consider that the CEO of Hewlett-Packard, Mark Hurd, received $42.5 million in 2008 pay. He had received over $20 million in signing inducements in 2005. During his tenure some 40,000 jobs have been eliminated at H-P. And consider this nice little perk: In 2008 the company also paid out about $181,000 for his business meals.

And then there is the case of Robert Rubin at Citigroup. During his nine years there the company lost over $65 billion. What did Rubin earn? He pocketed $126 million. What did he say when he left? “I bet there’s not a single year where I couldn’t have gone somewhere else and made more.”

Enough already. Drastic action is needed to achieve some justice. With all the attention on the Obama stimulus plan based on spending money the nation does not really have or can afford, it is appropriate to use this proposal to raise more revenues. Tax greed!

This entry was posted in RagBlog and tagged Greed, Progressive Taxation, U.S. Government. Bookmark the permalink.

2 Responses to Hirschhorn: The Greed Tax