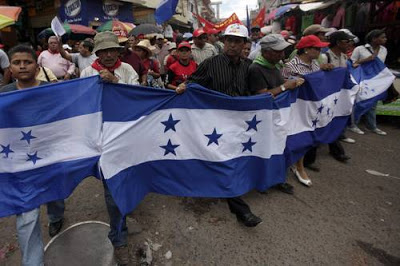 As though the din of battle against the de facto government were not enough, the Honduran resistance is engaged in an intense internal debate over its immediate future, regardless of whether President Manuel Zelaya is reinstated. At the center of the discussions is the November 29 election; resistance organizations are looking for a candidate with whom they can enter the fray united, they are counting on toppling the Partido Liberal (PL) and they have offered the presidential candidacy to Luis Alfonso Santos, the only bishop openly opposed to the coup d’état.

Honduran law prohibits the bishop from running unless he resigns his ministry, but that could be the least of the problems facing the resistance on its electoral path. Negotiations over forming a united front are taking place despite opposition from some sectors of the resistance. Several people’s organizations traditionally opposed to participating in elections see the one in November as a distraction from the central goals of reinstating Zelaya and continuing the drive to form a national constituent assembly.

Along the same lines, although the Frente de Resistencia has not made a firm decision, some leaders are already talking about boycotting the elections.

Union leader Carlos Humberto Reyes is the first independent candidate for the presidency of Honduras and many in the PL see him as an alternative to their own party’s candidate, whom they consider a golpista. In the past few days, in keeping with Zelaya’s petition to the Organization of American States not to recognize the electoral process if the president is not reinstated, Reyes called for “all candidates not supporting the coup, at all levels in the elections, to withdraw from the process if the dictatorship remains.”

Nevertheless, PL leaders close to Zelaya have registered as candidates for congress and mayoralties under the banner of the leftist Unificación Democrática (UD) party, whose presidential candidate, César Ham, is closer to Zelaya than Reyes is.

In the face of international isolation, the de facto government headed by Roberto Micheletti has staked its all on the November elections. During recent visits by the foreign ministers of OAS member nations, Micheletti insisted on the electoral solution: “There will be elections in Honduras whether the rest of the world approves or not.”

And apparently that’s the way it will be, considering that declarations of boycotts or of non-participation in the elections sound more like tactical moves than like statements of what coup opponents will actually do.

“We have to participate. Otherwise what happened to the Venezuelan reactionary right will happen to us: they didn’t vote, after having won a referendum, and that left Hugo Chávez alone in the national assembly,” said Ham at a time of intense negotiations with LP members interested in joining the ranks of his supporters.

For Carlos Eduardo Reina, an LP leader close to Zelaya, a boycott is not an option: “Not even the Frente Farabundo Martí de Liberación Nacional, armed and in the mountains, could boycott the elections. It is very difficult.”

For their part, anti-coup Hondurans are building a sort of national democratic front (as in Mexico in 1988); that is, as one of the traditional parties falls by the wayside, the left from within the parties and the social movements joins in, along a trail blazed by Zelaya, who, with his “fourth ballot” was in reality trying to build a third party, according to Víctor Meza, his minister of the interior.

In two-party Honduras, the PL and the Partido Nacional (PN) control 95 percent of the precincts and public offices. They share state institutions as well: of the 15 judges on the supreme court, for example, eight were nominated by the PL and seven by the PN.

It is this dominance by the reds (the PL) and the blues (the PN) that the resistance wants to challenge within three months.

“The worst-case scenario is that we try hard for the presidency of the republic and we get a strong caucus in congress, in alliance with the organized social movement,” Reina
postulates.

Not everyone in the resistance shares his optimism.

Juan Almendares, former rector of the Universidad Nacional Autónoma de Honduras (UNAH), holds, “The two traditional parties are the owners of the electoral machinery and they control the media to an overwhelming degree. So they are going to control the elections. It would be hard for the left to win, even if international observers come.”

In 2005, Almendares recalls, Zelay won with only 23 percent of the vote and a difference of only 1.7 percent over his rival, Porfirio Pepe Lobo. Suspicions of fraud, based on the fact that 15 percent of the ballot boxes were never counted, dissipated when powerful businessmen, always great electors, favored Zelaya. “As did the United States embassy,” Almendares points out.

Elvin Santos, PL presidential candidate, is the Enrique Peña Nieto of Honduras: young, handsome, a successful businessman and a member of Opus Dei. Put to the test on the Frente a Frente program on channel 5, the host asks him in ten different ways, before the candidate answers, whether what we are witnessing is a coup d’état or a “constitutional succession.” The candidate wavers. “The irresolute don’t deserve to govern the country,” the host warns the candidate, who enjoyed a comfortable lead in the polls before the coup. Santos finally surrenders: “It was a constitutional succession.”

For the past two months Santos has been in free-fall, failing to map out a clear strategy separating him from the coup d’état. He recently accused his opponent Porfiro Lobo of forming an alliance with Zelaya to “destroy my candidacy.”

“We cannot for a second assume that the problem will fade away or move aside on its own, because the problem must be confronted, resolved, and that is what we are discussing, “ Santo said as he left a meeting with OAS foreign ministers.

Two months later Santos is still “discussing,” as is Lobo, also an expert in rhetorical juggling, both of them with instructions from their advisors in Miami.

Like Zelaya, Lobo is a cattle-rancher from Olancha, with the difference that in his youth he was a fellow traveler of the Communist Party. He even went to Moscow for a six-month training course.

“Let’s not forget who provoked the shameful state the country is suffering through,” Lobo declares frequently in his effort to blames the political crisis on a dispute within the PL, even though, the resistance says, the PN participated in the coup.

In 2005, “the decision was made (after Zelaya’s narrow win) by economic power groups, because for them Pepe was a ‘communist,’ or in any case less reliable. Without doubt Elvin is more reliable for the business sector,” Ham asserts.

It is a paradox for the businessmen who backed the coup d’état that their choice is a presidential candidate they mistrust, who is not one of their own, but is, like the errant president, of the “agricultural oligarchy.”

“The Partido Nacional will probably win the next elections, but, with the revival of democratic civic awareness, we can foresee the empowerment of different political actors, who will break the two-party mold, in a way similar to what happened in other Central American countries after intense political and social upheavals,” UNAH researcher Ramón Romero emphasizes.

Musing on his candidacy, Bishop Santos puts is this way: “The people’s front will have some great surprises (for the golpistas) in the elections.”
The pro-coup media are saying in the days leading up to the formal opening of the campaigns that the experiment with unity is an alliance between the resistance and “the dark side of the Partido Liberal.”