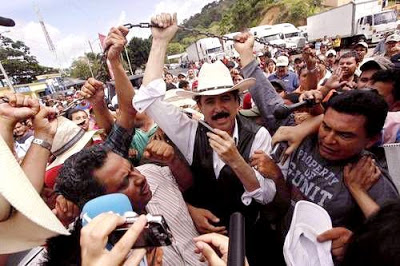 Deposed Honduran president Manuel Zelaya announced on July 29 that within days he will return to Tegucigalpa, accompanied by a “peaceful popular army” of his followers, to resume the office of the presidency.

Zelaya said his reinstatement will be the result of a political agreement with some members of the coup government, mentioning specifically the armed forces. “Let there be no doubt,” he declared, “that at any moment young military officers affected by the coup will detain Romeo Vásquez Velásquez.” General Vásquez Velásquez, head of the joints chiefs of staff, was a central figure in the June 28 coup d’état.

A statement attributed to the Movimiento de Oficiales Superiores y Subalternos de las Fuerzas Armadas (Movement of Superior and Subordinate Officers of the Armed Forces) and distributed on July 29 by anti-coup organizations criticized Vásquez for politicizing the armed forces. “Politicians,” it declared, “in collusion with military commanders, have implicated the armed forces and have damaged the good reputation we had with the Honduran people.”

The statement claims a group of businessmen distributed 30 million lempiras, about 1.6 million dollars, among the country’s top military commanders prior to the coup. “We declare that the armed forces are not the gendarmes of any elite economic group,” the statement continued, “but that we are with the people because most of our members, officers and enlisted men as well, come from the people.”

Speaking to a group of supporters in Ocotal, Nicaragua, about 20 kilometers from the Honduran border, Zelaya said the popular army will be formed from the estimated 500 Hondurans who have made their way on foot through dense jungle to meet him in Nicaragua. Once back across the border, he said, they will be joined by other Hondurans opposed to the coup and, armed with “the weapons of intelligence and reason,” they will proceed to the capital of Tegucigalpa. 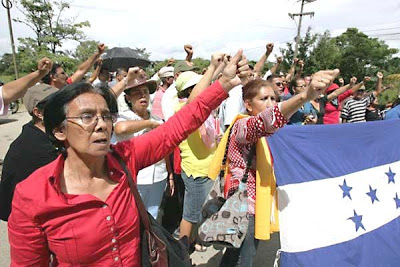 Zayala supporters at the border. Photo from Indymedia Honduras.
After an attempt to return to Honduras by air on July 5 was foiled by the military, Zelaya announced he would return by land and actually crossed the border for a brief stay on Friday, July 24. He was greeted by several thousand supporters who had defied and evaded military roadblocks in their effort to greet him. Despite stern warnings from the coup government that he would be arrested if he entered the country, Zelaya spoke briefly and calmly with a Honduran lieutenant colonel before returning to Nicaragua. Later reports in the pro-coup press denied rumors that the lieutenant colonel, Luis Recartes, had been jailed for speaking with Zelaya without arresting him.

U.S. Secretary of State Hillary Clinton criticized Zelaya’s return to his country as reckless and urged him to seek a negotiated settlement through the ongoing efforts of Costa Rican President Óscar Arias, efforts which have failed so far and appear destined to fail again. The military has issued a statement of approval for Arias’ proposals and the legislature is expected to vote Monday on whether to accept them. But the proposals call for Zelaya to be reinstasted with severely limited powers, prohibiting specifically any attempt to write a new constitution or even to poll the citizenry on whether they want one, limits neither Zelaya nor the popular organizations behind him are prepared to accept. The legislature is divided on the question of amnesty for crimes allegedly committed by members of the Zelaya government in the days leading up to the coup.

The July 24 events came on the second day of strikes endorsed by all three of the country’s labor federations, which resulted in the occupation of a number of government buildings by public employees. In a strike by some members of the national police, including some in the anti-riot force, several police stations were reportedly locked by using handcuffs on the doors.

Teachers have been on a slowdown since the coup on June 28, working three days a week instead of the five demanded by authorities. 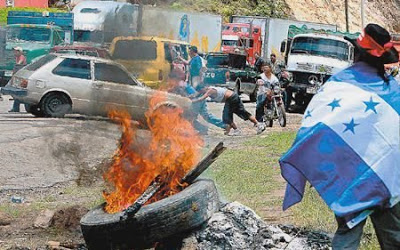 Union members block the highway. Photo from El Heraldo.
The military had set up road blocks at a number of points on the highway from Tegucigalpa to El Paraíso, near the Nicaraguan border, in anticipation of the crowds of anti-coup demonstrators expected to welcome Zelaya home. Some of the soldiers are said to have disobeyed orders by allowing demonstrators to proceed and many of the demonstrators evaded the roadblocks by walking long distances through dense jungle.

Some sources say as many as 3,000 were on hand when Zelaya crossed the border.

The military is reportedly not allowing demonstrators to leave and is denying access to food and water, although area residents have shared their meager resources. Many demonstrators are still in the El Paraíso area a week after the demonstrations began.

The coup government extended curfew hours in the border area several times until finally declaring an around-the-clock curfew, with all constitutional rights suspended, turning the curfew into a state of siege.

The police and military have been using teargas and rubber bullets against the anti-coup forces, beating many and arresting an unknown number. The body of one man, Pedro Magdiel Muñoz, was found near the demonstrations with more than 40 stab wounds and signs he had been tortured.

Among those arrested was Rafael Alegría, a prominent Honduran activist and one of the founders of Vía Campesina, an international campesino organization, who was detained briefly and released.

Among those seeking to greet Zelaya were his wife, Xiomara Castro de Zelaya, and several other family members, who were eventually given permission to finish their journey thanks to a court order.