If You Don’t Grow Your Seed, You Lose Your Power 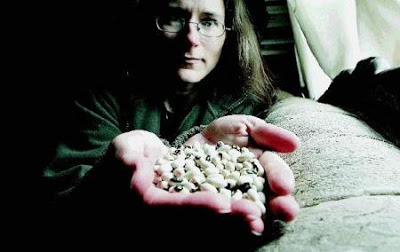 Heather Meek leafs through the seed catalogue she wrote on the family computer, on winter nights after the kids went to bed.There are Kahnawake Mohawk beans and Painted Mountain corn; Tante Alice cucumber and 40 varieties of heritage tomatoes.

Selling seeds is more than just an extra source of income on this organic farm an hour northwest of Montreal.

For Meek and partner Frederic Sauriol, propagating local varieties is part of a David and Goliath struggle by small farmers against big seed companies.

At stake, they believe, is no less than control of the world’s food supply.

Since the dawn of civilization, farmers have saved seeds from the harvest and replanted them the following year.

But makers of genetically modified (GM) seeds — introduced in 1996 and now grown by some 70,000 Canadian farmers, according to Monsanto, the world’s largest seed company — have been putting a stop to that practice.

The 12 million farmers worldwide who will plant GM seeds this year sign contracts agreeing not to save or replant seeds. That means they must buy new seeds every year.

Critics charge such contracts confer almost unlimited power over farmers’ lives to multinational companies whose priority is profit. They say GM seeds are sowing a humanitarian and ecological disaster.

But Trish Jordan, a Canadian spokesman for Monsanto, explains that requiring farmers to sign “technology use agreements” allows companies to recoup the cost of developing products.

“Farmers choose these products because of benefits they provide,” Jordan says. “That’s why we’re successful as a company.”

The debate over GM seeds has come into sharp focus as the world faces a food-price crisis that threatens to push millions into starvation.

In recent months, riots have erupted from Haiti to Bangladesh in the wake of soaring costs for staples like bread, rice and corn.

The crisis has prompted calls to step up investment in biotechnology to improve crop yields in developing countries.

“At a global level, it’s a problem that’s not going to be solved by organics or focusing on local food,” says Douglas Southgate, a professor of agricultural economics at Ohio State University.

“Dealing with the problem on a global scale involves using biotechnology.”

But Ottawa author Brewster Kneen, a fierce opponent of GM seeds, counters that biotechnology, as practised by companies like Monsanto, is not the answer.

“The point was never feeding the world or saving the environment,” says Kneen, author of several books about agriculture and biotechnology, including Farmageddon: Food and the Future of Biotechnology. “It’s about wealth, not about health.”

But in the 1980s, he says, the federal government began privatizing agricultural research.

Worldwide, GM crops have grown 67-fold in 12 years, now covering 690.9 million hectares in 23 countries, according to the industry’s Council for Biotechnology Information.

Canada is the fourth-largest grower of GM crops, which cover seven million hectares. About half of the corn and soybeans grown in Quebec and Ontario are GM crops.

Sauriol and Meek started their first seedlings 13 years ago in their four-room apartment on de Bullion St. Now, the Ferme de Bullion delivers fresh produce to 200 Montreal families every week.

The tiny leeks, sown in February, poked up through the soil like small blades of grass.

They won’t be ready for harvest until November.

Muller’s words resonate with farmers Meek and Sauriol, whose four daughters help with the painstaking work of cleaning seeds over the winter.

“But if you don’t grow your seed, you lose your power.”

This entry was posted in RagBlog and tagged Agriculture, Capitalism. Bookmark the permalink.