Inner Strength That Will Carry His Family Forever 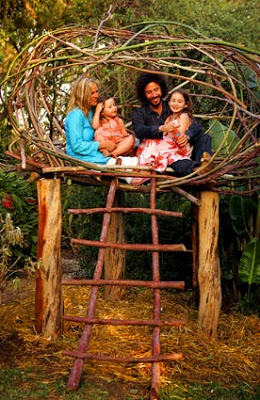 Ilse Ackerman, Meeno Peluce and their daughters get cozy in the nest the couple built from repurposed eucalyptus in the yard of their Lincoln Heights home.
A Lincoln Heights fixer-upper is transformed into a country escape in urban L.A.
By Lisa Boone / May 22, 2008

Intrigued — and determined — she and husband Meeno Peluce drove to every cul-de-sac in the area in search of “For Sale by Owner” signs. When the couple finally saw the 1926 house — atop a steep, winding dirt road on the outskirts of downtown Los Angeles — they found a condemned structure. The backyard featured a discarded black Naugahyde couch and some yucca plants. Everything else was dead.

Ackerman and Peluce, however, were not deterred.

“We didn’t see it as a wreck,” Ackerman remembers. “It always looked like it does in our minds.”

In their minds, they saw a magical outdoor space for their growing family. After six years of the couple’s planting, transplanting, building and tending, visitors can see it too: a wild jungle of blooming Pride of Madeira, cascading white roses, flowering bougainvillea reaching toward the sky. Thriving vegetable gardens are filled with chard, squash, tomatoes, basil and sunflowers, some bursting from simple bales of hay and compost with eye-popping color.

Ilse Ackerman and Meeno Peluce turn their once-dead yard in Lincoln Heights into Skyfarm — an oasis for their family, their 15 animals and 60,000 bees. 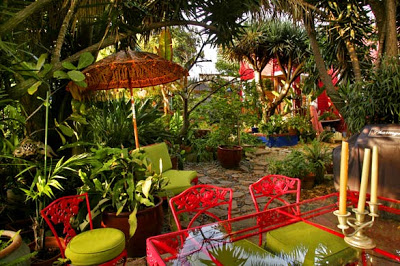 Then there are the animals of Skyfarm, as the couple has dubbed their home. Two dogs, three cats, one tortoise. A couple of cockatiels in an aviary, six chickens in a coop, a pet squirrel with the Spanish name Quince — “because he is the 15th animal,” Peluce says. And that’s not counting the 60,000 to 90,000 bees in three hives kept by Ackerman, a sculptor and former art teacher turned amateur beekeeper.

For her, Skyfarm is where her creative energy takes flight. For Peluce, a professional photographer, it is his “decompression chamber” — a country escape in the heart of urban L.A.

At the time Ackerman saw the classified ad, the couple was living in a loft at the Brewery industrial arts complex near downtown and were looking for an affordable house with more room. Ackerman, a New England native, pined for a garden.

They hired an inspector to look at the Lincoln Heights house, and his assessment was grim. “He assumed it was a tear-down,” Peluce says. “He also told me the house was ‘a marriage breaker.’ But for us, it was just another adventure.”

They purchased the property, their first home, in October, and moved in by December. The house was barely inhabitable, with holes in the wall, buckled floors and no hot water. Enough debris had been dumped on the property to fill the equivalent of eight railroad cars. Undaunted, the couple cooked meals on a camp stove, prompting them to call this period their “homesteading” phase.

Friends and family thought they were nuts.

“I was terrified,” says Sondra Peluce, Meeno’s mother, remembering her first impression of the house. “I thought they had taken leave of their senses. I actually think I went and threw up. It was like an out-of-control fun house that was not fun.”

Her dismay turned to pride, however, as she watched the home’s transformation over the succeeding months.

“When I saw my son hoisting railroad ties on his shoulder, I thought to myself, ‘He is building an inner strength that will carry his family forever,’ ” she says.

Read all of the article here, and click here for all the photos. / Los Angeles Times

This entry was posted in RagBlog and tagged American Society, Ecology. Bookmark the permalink.