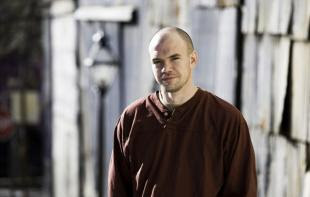 In its final days, the Bush administration tried to sell drilling rights to Utah’s Red Rock Country. Student Tim DeChristopher purchased a chunk of that land in an act of civil disobedience.
Modern-Day Monkeywrencher
By Martin Stainthorp / April 10, 2009

During the final days of the Bush administration, Tim DeChristopher’s civil disobedience drew attention to a rushed federal auction for Utah drilling rights.

On Dec. 19, Tim DeChristopher, 27, walked into a Bureau of Land Management building in Salt Lake City where an auction was being held. The federal government was selling drilling rights on 164,000 acres of land in Utah’s Red Rock Country. Earlier that month, several environmental groups—including the National Resources Defense Council (NRDC), the Southern Utah Wilderness Alliance (SUWA), the Wilderness Society and Earth Justice—had filed a lawsuit challenging the auction. They objected to the leasing of 110,000 acres of public lands, most of which are adjacent to Arches and Canyonlands National Parks, and argued that drilling would damage views and increase pollution.

When DeChristopher entered the building, officials mistook him for a bidder and allowed him to enter the auction, where he was given a bidding paddle—number 70. The University of Utah economics student says he stood out in a room filled mostly with veteran oil and gas men, but he started holding up his paddle to bid. By the time officials caught on and stopped the auction, DeChristopher had acquired the rights to 12 parcels of land, totaling 22,000 acres—for $1.79 million that he didn’t have.

He later told authorities he had engaged in civil disobedience to protect the land and was willing to go to prison for his actions. Attracting media attention and support from around the world, DeChristopher raised enough money to offer an initial $45,000 payment for the lands he had acquired, but the Bureau of Land Management refused it.

On Jan. 17, the environmental groups won their lawsuit, and Interior Secretary Ken Salazar later invalidated 77 controversial leases from the auction, including all of DeChristopher’s. Despite the victory, he still faces federal criminal charges.

‘I see this as the way the environmental movement should be working: with some big groups on the inside… And then people like me, on the outside, pushing the boundaries’

In These Times called DeChristopher in Salt Lake City, where he lives.

Why did you intervene in the auction?

It was a rushed attempt to sell off some of the most precious lands in southern and eastern Utah right before Bush left office. And there were a lot of examples of how rushed it was. One of the most entertaining is that when they first announced what parcels were up for auction, they included land in the city of Moab that had houses on it. They included the land underneath the Moab golf course, which they tried to auction off to drill.

There was a lot of opposition to it, and the environmental impact statement wasn’t adequately done and didn’t factor in a lot of the costs associated with drilling. And the public comment period was rushed and people were obstructed from getting accurate information.

Who were some of the other bidders?

A lot of them were small energy producers who were intending to later flip the parcels, to sell them to the bigger companies. There were a few bigger companies there, like Bill Barrett Corporation. And I was told that one of the companies I was bidding against was Halliburton.

What is your reaction to Secretary Salazar’s decision to invalidate 77 of the leases, including all of yours?

I see this as the way the environmental movement should be working: with some of the big groups on the inside, like SUWA and NRDC, that are working through their means—whether through lawsuits or whatever is available to them. And then people like me, on the outside, pushing the boundaries and doing the controversial stuff that the big groups can’t do.

Could the lawsuit alone have produced this outcome or was your action necessary?

My action was certainly needed and that’s the feedback I’ve gotten from a lot of people involved in this issue. It brought to light the injustice behind this auction. And it kept it in the media and the public eye for that month or so after the auction before Salazar made his decision.

What’s going to happen to the 77 parcels now?

Now the government goes back and considers whether it’s really a good idea to be auctioning off this land for oil and gas development. It’ll look at the land’s real value and hopefully do an accurate environmental impact statement that weighs the costs of air pollution, the cost of road building, the loss of recreation—all those things it hadn’t considered before.

Do you still expect to be criminally charged?

I would expect that it would still happen. The Salazar decision didn’t erase the case against me even though it did protect the land for now. The one thing that it did is take away the damages from my case, which I think puts me in a better legal position because there’s no way that they can show $1.7 million of damages to anyone. And because the decision is an official ruling stating that this auction was inappropriate and illegal, it strongly supports the idea that what I was standing up against was something unjust.

Have you been surprised by all the support you’ve received?

I’ve been very surprised by that and surprised by how broad that support is. It’s been coming from all over the country and from across the political spectrum. A lot of mainstream folks are supporting this not-so-mainstream action.

From my lawyer, Patrick Shea—the former director of the Bureau of Land Management [under Clinton], who’s now joining my side and supporting what I did—to a lot of professors and folks at the university who are supporting what I did. Last week I went to Utah Valley University, to Orem and Provo, and had two speaking engagements down there. And that’s really the most conservative part of Utah, which is one of the most conservative states in the country. I received a huge amount of support there.

How do you feel about people equating your action with that of Edward Abbey and The Monkey Wrench Gang?

I was a big fan of Edward Abbey, especially when I was younger. And in the last couple months, I’ve met a lot of Edward Abbey’s close friends and some of the people who inspired the characters in The Monkey Wrench Gang. What they told me is that my actions are categorically different than monkeywrenching. The monkeywrenching of Abbey’s style was something solitary that one did at night and then snuck away and never talked about again. Whereas what I did was more in line with civil disobedience, of people openly standing in the way of an unjust law or an unjust system and accepting the consequences for it.

In the weeks following the auction, you raised about $100,000, much of which was intended to pay for the lands. Since that option is now off the table, what do you plan to do with the money?

About $40,000 of that money is in the legal fund that we’ll hang on to because it looks like there’s a good chance that this case will go to trial. And we’ll probably need quite a bit more than that.

The rest of the money is in the lease purchase fund. I’m drafting a letter right now that I’m going to send out in the next few days to all the donors, informing them of what the situation is and asking them whether they want the money returned, put toward my legal fund or put toward another similar cause, namely the nonprofit group that I’ve helped launch in the last two months called Peaceful Uprising—a group that seeks to be the direct action side of the environmental movement that has been lacking in recent years.

Our mission is to train and support and defend those who take nonviolent direct action to protect our future from climate change.

In promoting more aggressive, grassroots tactics within the environmental movement, you’ve expressed criticism of some of the mainstream environmental groups for not pushing people to act outside of traditional methods, such as donating money, writing letters and signing petitions.

All of that stuff is necessary and it needs to continue to be an important part of the movement, but it can’t constitute the whole movement, especially an environmental movement where there are entrenched interests on the other side.

The fossil fuels industry, for example, is profiting off the destruction of our future. We’re battling against this huge force that has far more political power than the movement does. That industry gets to write the rules.

So, if the environmental movement is going to make progress, it must shift the center and shift what’s considered reasonable. There needs to be that direct action side of it.

[Martin Stainthorp is an editorial intern at In These Times. A native of Chicago, he graduated from the University of Richmond in 2007.]