Iraq: A War Crime of Immense Proportions: The (Non-)Reconstruction Saga

What makes it even more remarkable is that, at least to some extent, Iraq reconstruction was driven by considerations of US electoral politics. This makes the entire debacle even more repugnantly disgusting.

Shame, shame, George W. Bush !! You have no morals, no values, no conscience. 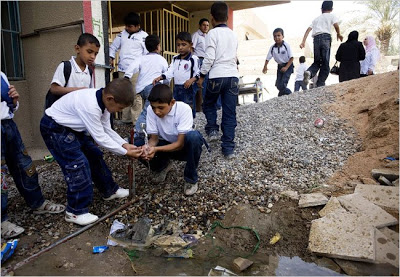 BAGHDAD — An unpublished 513-page federal history of the American-led reconstruction of Iraq depicts an effort crippled before the invasion by Pentagon planners who were hostile to the idea of rebuilding a foreign country, and then molded into a $100 billion failure by bureaucratic turf wars, spiraling violence and ignorance of the basic elements of Iraqi society and infrastructure.

The history, the first official account of its kind, is circulating in draft form here and in Washington among a tight circle of technical reviewers, policy experts and senior officials. It also concludes that when the reconstruction began to lag — particularly in the critical area of rebuilding the Iraqi police and army — the Pentagon simply put out inflated measures of progress to cover up the failures.

Mr. Powell’s assertion that the Pentagon inflated the number of competent Iraqi security forces is backed up by Lt. Gen. Ricardo S. Sanchez, the former commander of ground troops in Iraq, and L. Paul Bremer III, the top civilian administrator until an Iraqi government took over in June 2004.

Among the overarching conclusions of the history is that five years after embarking on its largest foreign reconstruction project since the Marshall Plan in Europe after World War II, the United States government has in place neither the policies and technical capacity nor the organizational structure that would be needed to undertake such a program on anything approaching this scale. 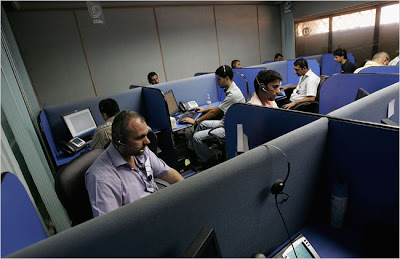 The bitterest message of all for the reconstruction program may be the way the history ends. The hard figures on basic services and industrial production compiled for the report reveal that for all the money spent and promises made, the rebuilding effort never did much more than restore what was destroyed during the invasion and the convulsive looting that followed.

By mid-2008, the history says, $117 billion had been spent on the reconstruction of Iraq, including some $50 billion in United States taxpayer money.

The history contains a catalog of revelations that show the chaotic and often poisonous atmosphere prevailing in the reconstruction effort. 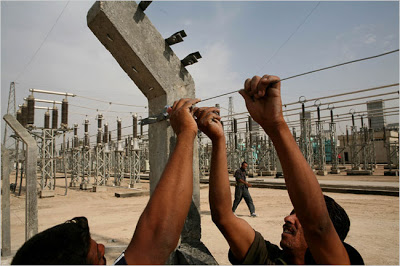 ELECTRICITY: A new generator in Baghdad in 2007. Electricity output is now only slightly higher than it was before the war. Photo: Michael Kamber for The New York Times.

Titled “Hard Lessons: The Iraq Reconstruction Experience,” the new history was compiled by the Office of the Special Inspector General for Iraq Reconstruction, led by Stuart W. Bowen Jr., a Republican lawyer who regularly travels to Iraq and has a staff of engineers and auditors based here. Copies of several drafts of the history were provided to reporters at The New York Times and ProPublica by two people outside the inspector general’s office who have read the draft, but are not authorized to comment publicly.

Mr. Bowen’s deputy, Ginger Cruz, declined to comment for publication on the substance of the history. But she said it would be presented on Feb. 2 at the first hearing of the Commission on Wartime Contracting, which was created this year as a result of legislation sponsored by Senators Jim Webb of Virginia and Claire McCaskill of Missouri, both Democrats.

The manuscript is based on approximately 500 new interviews, as well as more than 600 audits, inspections and investigations on which Mr. Bowen’s office has reported over the years. Laid out for the first time in a connected history, the material forms the basis for broad judgments on the rebuilding program.

In the preface, Mr. Bowen gives a searing critique of what he calls the “blinkered and disjointed prewar planning for Iraq’s reconstruction” and the botched expansion of the program from a modest initiative to improve Iraqi services to a multibillion-dollar enterprise.

Mr. Bowen also swipes at the endless revisions and reversals of the program, which at various times gyrated from a focus on giant construction projects led by large Western contractors to modest community-based initiatives carried out by local Iraqis. While Mr. Bowen concedes that deteriorating security had a hand in spoiling the program’s hopes, he suggests, as he has in the past, that the program did not need much outside help to do itself in.

Despite years of studying the program, Mr. Bowen writes that he still has not found a good answer to the question of why the program was even pursued as soaring violence made it untenable. “Others will have to provide that answer,” Mr. Bowen writes.

“But beyond the security issue stands another compelling and unavoidable answer: the U.S. government was not adequately prepared to carry out the reconstruction mission it took on in mid-2003,” he concludes.

The history cites some projects as successes. The review praises community outreach efforts by the Agency for International Development, the Treasury Department’s plan to stabilize the Iraqi dinar after the invasion and a joint effort by the Departments of State and Defense to create local rebuilding teams. 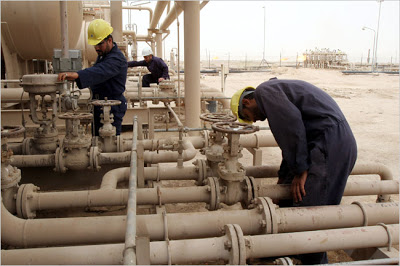 OIL: The production of oil at Iraqi fields, like the one above, 370 miles southeast of Baghdad, has been below prewar levels. Photo: Nabil al-Jurani/Associated Press.

But the portrait that emerges over all is one of a program’s officials operating by the seat of their pants in the middle of a critical enterprise abroad, where the reconstruction was supposed to convince the Iraqi citizenry of American good will and support the new democracy with lights that turned on and taps that flowed with clean water. Mostly, it is a portrait of a program that seemed to grow exponentially as even those involved from the inception of the effort watched in surprise.

On the eve of the invasion, as it began to dawn on a few officials that the price for rebuilding Iraq would be vastly greater than they had been told, the degree of miscalculation was illustrated in an encounter between Donald H. Rumsfeld, then the defense secretary, and Jay Garner, a retired lieutenant general who had hastily been named the chief of what would be a short-lived civilian authority called the Office of Reconstruction and Humanitarian Assistance.

The history records how Mr. Garner presented Mr. Rumsfeld with several rebuilding plans, including one that would include projects across Iraq.

“What do you think that’ll cost?” Mr. Rumsfeld asked of the more expansive plan.

“My friend,” Mr. Rumsfeld replied, “if you think we’re going to spend a billion dollars of our money over there, you are sadly mistaken.”

In a way he never anticipated, Mr. Rumsfeld turned out to be correct: before that year was out, the United States had appropriated more than $20 billion for the reconstruction, which would indeed involve projects across the entire country.

The secondary effects of the invasion and its aftermath were among the most important factors that radically changed the outlook. Tables in the history show that measures of things like the national production of electricity and oil, public access to potable water, mobile and landline telephone service and the presence of Iraqi security forces all plummeted by at least 70 percent, and in some cases all the way to zero, in the weeks after the invasion.

Subsequent tables in the history give a fast-forward view of what happened as the avalanche of money tumbled into Iraq over the next five years.

By the time a sovereign Iraqi government took over from the Americans in June 2004, none of those services — with a single exception, mobile phones — had returned to prewar levels.

And by the time of the security improvements in 2007 and 2008, electricity output had, at best, a precarious 10 percent lead on its levels under Saddam Hussein; oil production was still below prewar levels; and access to potable water had increased by about 30 percent, although with Iraq’s ruined piping system it was unclear how much reached people’s homes uncontaminated.

Whether the rebuilding effort could have succeeded in a less violent setting will never be known. In April 2004, thousands of the Iraqi security forces that had been oversold by the Pentagon were overrun, abruptly mutinied or simply abandoned their posts as the insurgency broke out, sending Iraq down a violent path from which it has never completely recovered.

At the end of his narrative, Mr. Bowen chooses a line from “Great Expectations” by Dickens as the epitaph of the American-led attempt to rebuild Iraq: “We spent as much money as we could, and got as little for it as people could make up their minds to give us.”

2 Responses to Iraq: A War Crime of Immense Proportions: The (Non-)Reconstruction Saga