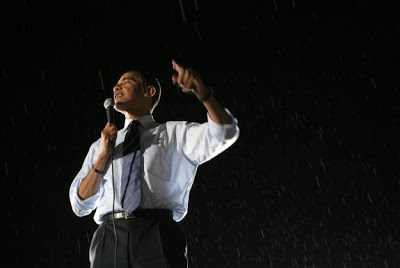 I almost never agree with neo-con Charles Krauthammer on anything, but about this column, I hope he’s right. If so, it’ll open tremendous space to act, that is, if we can get our act together.

The Real Obama
A Centrist? No. A Transformer
By Charles Krauthammer / December 12, 2008

Barack Obama has garnered praise from center to right — and has highly irritated the left — with the centrism of his major appointments. Because Obama’s own beliefs remain largely opaque, his appointments have led to the conclusion that he intends to govern from the center.

Obama the centrist? I’m not so sure. Take the foreign policy team: Hillary Clinton, James Jones and Bush holdover Robert Gates. As centrist as you can get. But the choice was far less ideological than practical. Obama has no intention of being a foreign policy president. Unlike, say, Nixon or Reagan, he does not have aspirations abroad. He simply wants quiet on his eastern and western fronts so that he can proceed with what he really cares about — his domestic agenda.

Similarly his senior economic team, the brilliant trio of Tim Geithner, Larry Summers and Paul Volcker: centrist, experienced and mainstream. But their principal task is to stabilize the financial system, a highly pragmatic task in which Obama has no particular ideological stake.

A functioning financial system is a necessary condition for a successful Obama presidency. As in foreign policy, Obama wants experts and veterans to manage and pacify universes in which he has little experience and less personal commitment. Their job is to keep credit flowing and the world at bay so that Obama can address his real ambition: to effect a domestic transformation as grand and ambitious as Franklin Roosevelt’s.

As Obama revealingly said just last week, “This painful crisis also provides us with an opportunity to transform our economy to improve the lives of ordinary people.” Transformation is his mission. Crisis provides the opportunity. The election provides him the power.

The deepening recession creates the opportunity for federal intervention and government experimentation on a scale unseen since the New Deal. A Republican administration has already done the ideological groundwork with its unprecedented intervention, culminating in the forced partial nationalization of nine of the largest banks, the kind of stuff that happens in Peronist Argentina with a gun on the table. Additionally, Henry Paulson’s invention of the number $700 billion forever altered our perception of imaginable government expenditure. Twenty billion more for Citigroup? Lunch money.

Moreover, no one in Congress even pretends that spending should be pay as you go (i.e., new expenditures balanced by higher taxes or lower spending), as the Democrats disingenuously promised when they took over Congress last year. Even some conservative economists are urging stimulus (although structured far differently from Democratic proposals). And public opinion, demanding action, will buy any stimulus package of any size. The result: undreamed-of amounts of money at Obama’s disposal.

To meet the opportunity, Obama has the political power that comes from a smashing electoral victory. It not only gave him a personal mandate. It increased Democratic majorities in both houses, thereby demonstrating coattails and giving him clout. And by running on nothing much more than change and (often contradictory) hopes, he has given himself enormous freedom of action.

Obama was quite serious when he said he was going to change the world. And now he has a national crisis, a personal mandate, a pliant Congress, a desperate public — and, at his disposal, the greatest pot of money in galactic history. (I include here the extrasolar planets.)

It begins with a near $1 trillion stimulus package. This is where Obama will show himself ideologically. It is his one great opportunity to plant the seeds for everything he cares about: a new green economy, universal health care, a labor resurgence, government as benevolent private-sector “partner.” The first hint came yesterday, when Obama claimed, “If we want to overcome our economic challenges, we must also finally address our health care challenge” — the perfect non sequitur that gives carte blanche to whatever health-care reform and spending the Obama team dreams up. It is the community organizer’s ultimate dream.

Ironically, when the economy tanked in mid-September, it was assumed that both presidential candidates could simply forget about their domestic agendas because with $700 billion drained by financial system rescues, not a penny would be left to spend on anything else.

On the contrary. With the country clamoring for action and with all psychological barriers to government intervention obliterated (by the conservative party, no less), the stage is set for a young, ambitious, supremely confident president — who sees himself as a world-historical figure before even having been sworn in — to begin a restructuring of the American economy and the forging of a new relationship between government and people.

Don’t be fooled by Bob Gates staying on. Obama didn’t get elected to manage Afghanistan. He intends to transform America. And he has the money, the mandate and the moxie to go for it.

Here’s an interesting piece with a totally different perspective.