Iraq Is Going to Run Its Oil Industry, Not Neocons 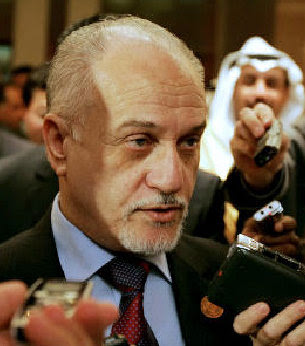 New approach: Iraqi Oil Minister Hussain Al Shahristani… “Oil and gas are the property of the Iraqi people. Nobody can share that ownership.” Photo: AFP
Is America losing out on Iraqi oil?
By Atul Aneja / September 17, 2008

The grand American neoconservative enterprise of controlling Iraqi oil is facing its most serious crisis.

On August 23, Iraqi Oil Minister Hussain Al Shahristani flew out of Iraq and headed for China. Five days later, he signed a $3b contract with the state-owned China National Petroleum Corporation (CNPC). The agreement revived an earlier deal signed in 1997 for the development of the Ahdab field, located 160 kilometres southeast of Baghdad.

Contrary to post-invasion predictions, the first foreign contract for the development of an Iraqi oil field has not gone to a western oil major. In fact, the deal with a Chinese company has signalled that Iraq might have begun to strongly resist western oil interests, seeking a free run over its mammoth energy resources. The jury is now out on whether the deal with China will set a precedent that will derail the American oil project in Iraq.

The contract with China has flowed from a strongly nationalistic oil policy the government of Prime Minister Nouri Al Maliki has begun to pursue recently. In a BBC interview aired in June, Dr. Shahristani — a former nuclear scientist and a key architect of this policy — unveiled the broad principles of the new Iraqi approach. He stressed that in future the state-run Iraq National Oil Company (INOC) would steer the development of Iraq’s oil resources. Iraq’s oil would remain in sovereign Iraqi hands, and foreign participants would not have any ownership rights over it. He added that foreign companies would be allowed to cooperate with INOC, and paid a fee for their services. Foreign presence would be of a technical nature, temporary and terminate with the expiry of signed contracts.

Elaborating on Iraq’s energy policy, Dr. Shahristani observed: “I am not saying that we are going to run a totally nationalised Iraqi oil policy. What I am saying is that Iraq will have control over its national wealth. Iraq is going to run its oil industry mostly by the Iraq National Oil Company, and if Iraq needs help from international oil companies, they will be invited to come and cooperate with the Iraq National Oil Company on terms and conditions that are acceptable to Iraq and generate the highest revenue for the Iraqi people.” Iraq would not sign with western companies Production Sharing Agreements (PSA) — a concept that evolved in the 60s — which allowed foreign participants to profit from the sale of oil they had been involved in extracting.

“The constitution states it clearly that oil and gas are the property of the Iraqi people. Nobody can share that ownership with the Iraqi people,” Dr. Shahristani said. Instead of PSAs, Iraq would enter into more benign Service Contracts with foreign partners. “In Service Contracts, there is no sharing in the production… At this stage, developing our prime fields that contain more than 70 per cent of all Iraqi proven reserves is going to be done by the Iraq National Oil Company and international oil companies that are interested to work with them. They have to accept the terms that INOC is going to offer, which is a Service Contract.” Dr. Shahristani’s remarks follow bitter wrangling in Iraq over a controversial new oil law that would have opened the floodgates for western inroads into the Iraqi energy sector.

Consistent with Dr. Shahristani’s position, the Iraqis have signed a Service Contract with the CNPC. The contract envisages production of 25,000 barrels of oil a day. A large part of this would be used to run a 1,320-MW power plant for providing the energy-starved Iraqis the much-needed electricity.

The Chinese stand to benefit from this as they would establish the power plant under a new contract that would be signed separately. Iraqi Oil Ministry spokesman Assim Jihad has said that work on the project could begin shortly. The Chinese company would provide technical advisers, oil workers and equipment to develop the oil field over a 20-year period.

The signing of the deal with China on its own terms is the second instance of long-term consequence, where the Iraqis have adopted a line that runs contrary to American interests. In early July, they rejected a security pact proposal that would have allowed U.S. troops to maintain a permanent presence in Iraq after December this year. The Status of Forces Agreement (SOFA) the Americans had been drafting would have led to an arrangement with Iraq that would have been similar to Washington’s post-World War II agreements with Japan and Korea. However, senior Iraqi officials began insisting that the Americans would have to spell out a cut-off date for withdrawal in case a security deal was to succeed. The Iraqi stance had the blessings of Grand Ayatollah Ali Sistani, a revered figure with a mass following in Iraq. His endorsement was itself an indication that the Iraqis were not in a mood to reverse their position easily.

In August, the Iraqis began indicating that they were looking at 2011 as the cut-off date for the American withdrawal. By 2009, they wanted American troops out of Iraqi cities. Keen to ensure that there was no deviation from a timeline seeking American withdrawal, the Prime Minister has reworked his negotiating team and packed it with loyalists. Mr. Maliki’s loyal ally, Muwaffak Al-Rubaie, who is also the national security adviser, has replaced foreign minister Hoshyar Zebari as the head of the negotiating team.

Backing up these moves, the Speaker of the Iraqi parliament, Mahmoud Mashhadani, issued a statement stressing that a two-thirds majority in parliament would be required if any agreement that had been reached by the government was to materialise. The influential Friday prayers leader in Najaf, Seyyed Sadruddin Ghapanchi, went even a step further. In an opinion piece that he recently wrote, he demanded that the SOFA draft must be put to a referendum.

Iran’s growing influence appears to be the reason for the Iraqi government’s defiance towards the Americans. The Iranians have been seeking the withdrawal of hostile American forces from Iraq and Afghanistan — its neighbouring countries to the east and the west. They were alarmed when the SOFA negotiations began to advance following serious Americans efforts to co-opt key Shia leaders into their fold.

However, the SOFA draft given by the Americans in March 2007 presented Tehran a golden opportunity to work on the Iraqis and reinforce its bonds with them. The document had alarmed the Iraqis as it did not offer Baghdad any explicit security guarantees.

Mr. Maliki’s government found this unacceptable as it made Iraq vulnerable to a possible attack by its Sunni neighbours, especially Turkey, Washington’s NATO ally. Turkey has been supporting the Turkomans — an ethnic group, concentrated in northern Iraq, that has shared an uneasy relationship with the Shia-dominated government in Baghdad. The Iraqis also saw the American insistence on controlling the Iraqi airspace as an affront to its sovereignty. Besides, the clause in the draft that the Iraqi government would not exercise any legal jurisdiction over American personnel deployed in the country was totally unacceptable. These provisions aroused deep nationalistic feelings in Iraqi political and religious circles and hardened sentiments against the occupation.

With the mood in Baghdad changing rapidly, Iranian diplomacy went into top gear. Tehran’s exertions proved highly successful, as from that time onwards, the Iranians and Mr. Maliki’s government began to work closely on all key issues. Iran’s close ties with the Mr. Maliki’s Al Dawa party and the Supreme Islamic Iraqi Council (SIIC) — the two organisations which have been part of a cross-border intra-Shia network, allowed Iran to quickly consolidate its influence within Iraqi ruling circles. The Iranians, with the assistance of the Maliki government, also helped avert full-scale assaults the Americans had planned against the forces of influential Shia cleric Moqtada Al Sadr. As a result, Iran’s entrenchment within the core Iraqi leadership had been accomplished by around the middle of 2008.

The assertion of Iraqi sovereignty, the consolidation of Iranian influence, and the growing marginalisation of the Americans have larger regional and global implications. On a regional scale, the Americans and their partners, the Israelis, have so far been losing ground to Iran’s allies, Syria and the Lebanese Hizbollah. Iranian influence in Gaza has also been growing because of Tehran’s support to the Palestinian Hamas, which is the dominant force there. However, these areas are not on the region’s energy map as they do not produce significant quantities of oil.

In sharp contrast, America’s possible retreat from oil-rich Iraq might well prove historic, as it is likely to generate a powerful counter-dynamic that could begin to challenge Washington’s strategic hold over the neighbouring Arab countries in the oil-rich Persian Gulf.

1 Response to Iraq Is Going to Run Its Oil Industry, Not Neocons