Iraq Report: Tense in the North 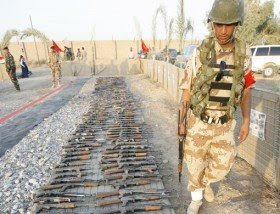 An Iraqi soldier inspects weapons which were found during military search operations in different parts of Diyala province.
Outbreak of armed conflict in tense Kirkuk feared
By Basil Adas / August 10, 2008

BAGHDAD — Prime Minister Nouri Al Maliki has commissioned a special committee of the Council of Ministers to urgently prepare a report on the potential outbreak of armed conflict in Kirkuk.

“Prime Minister Al Maliki is extremely concerned by the evolution of differences between Kurds and the Arab and Turkmen,” sources in Al Maliki’s Da’awa Party told Gulf News.

These sources added that Prime Minister Al Maliki is worried about two dangerous scenarios in Kirkuk. Firstly, Al Maliki fears that any limited or comprehensive eruption of violence could pave the way for ethnic cleansing.

Also, he fears the disintegration of the Iraqi Army if the Kurdish-majority Iraqi forces in Kirkuk support the annexation of the city.

Iraqi forces stationed in the Sunni Arab provinces of Nineveh, Salahuddin and Diyala would then have to step in to protect the Arabs and Turkmen in Kirkuk.

There are two brigades of the Iraqi army and 9,000 policemen in Kirkuk. The Kurds constitute more than 90 per cent of the leadership and more than 70 per cent of soldiers in the lower grades.

“There is no equal in military power. Kurdish forces are too large. They would be able to impose total control over Kirkuk in hours,” Tourhan Al Mufti, a member of the Turkmen block in the governorate of Kirkuk told Gulf News.

He added, however, the likelihood of such a takeover is small because of regional and international considerations.

“Barzani [Iraqi Kurdish leader] cannot annex Kirkuk without the greenlight from Washington, and I think if the US does this they will lose the support and cooperation of the Sunni Arab forces in the governorates of Al Anbar, Baghdad, Salahuddin, Diyala and Ninevah which will undermine any security improvements achieved by the US in Iraq,” Abdul Karim Al Dulaimi, a senior official of the Iraqi Interior Ministry told Gulf News.

Mohammad Al Jouburi, a member of the Arab bloc in the governorate of Kirkuk confirmed to Gulf News that two brigades of the Peshmergas forces who are responsible for the protection of Kurds have moved from Sulaimaniyah and Arbil to the towns of Qerager and Shawan about 20 kilometres outside of Kirkuk.

Also in Kirkuk are about 4,000 US troops at the Al Hurria air base who still maintain control over security in the city.

1 Response to Iraq Report: Tense in the North