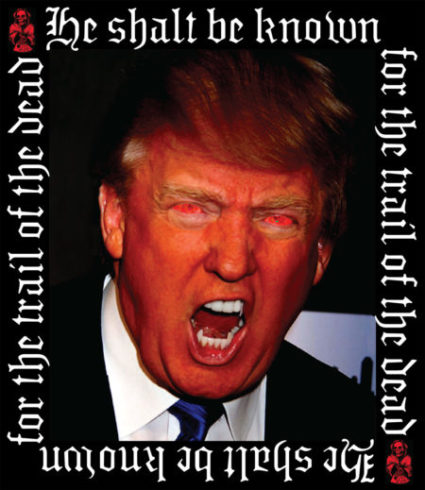 The pandemic lockdown has unlocked my alter-ego, Dr. Dada. Free to roam the murky corners of his imagination, he began to create digital collages that respond to the White House’s coronavirus folly with a combination of mortification and good old-fashioned sarcasm. (See here, here, here, and here.)

Today Dr. Dada’s outlook takes a dark turn because scientists — who are not only very intelligent people but who also have dedicated their lives to understanding and implementing effective public health policy — report that to prematurely set aside social distancing and other health directives and reopen economic activity may thrust hundreds of thousands of fresh COVID-19 victims into the hands of the nation’s already exhausted health workers and cause tens of thousands of new fatalities.

Despite what these well-trained, trusted, and mostly nonpartisan voices say, Donald Trump sat down on his golden toilet — where he conjures up his most superior wisdom — and decided that what America really needs is NOT more test kits, ventilators, or competent leadership but rather four more years of Donald Trump! Here is enterprise truly worthy of his (very stable) genius — to be acknowledged as the greatest leader in the entire illustrated history of the whole wide frisbee-shaped world.

The erstwhile president further concludes that the only way for him to win reelection is for all of Trump’s Repug friends in Congress and statehouses to send human waves of commercial and manufacturing activity back into the nation’s marketplaces. It’s a crass crapshoot by the world’s biggest casino-bankruptcy loser, and it’s aimed at diverting the economic narrative before the November election while, at the same time, drowning out the wailing funeral dirges from the Southland, the Heartland, and the Rust Belt.

The cruel irony, lost on this self-anoited “super genius,” as well as most of his supporters, is that the very states rushing to reopen their economies are the states (1) where novel coronavirus infections and deaths are on the rise and (2) where the voting majorities backed Trump in 2016.

It’s his much-touted “base,” for chrissakes, and this policy insures that his base will get sick and die in disproportionate numbers. Only time will tell whether Trump’s base is ready to trade in their red MAGA hats for the new black 2020 “DIE FOR DONALD” brand… and to actually sacrifice lives for Donald J. Trump.

But I also gotta say, as campaign strategies go, this one — to borrow a phrase favored by political scientists — is apeshit crazy.

[Rag Blog website designer James Retherford is an Austin-based writer, graphic designer, and political activist who contributes regularly to The Rag Blog. Jim, who was active in SDS, the Yippies, and political guerrilla theater, was a founder and editor of The Spectator in Bloomington, Indiana, in 1966, and was the ghost writer for Jerry Rubin’s iconic book, Do iT!]