Jean Trounstine : Behind Bars and Blogging for Human Rights 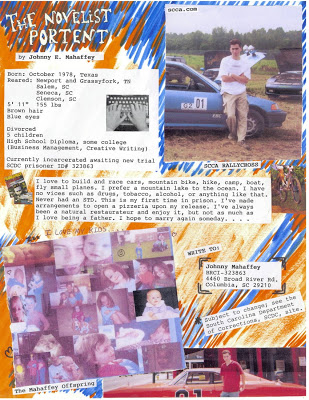 Texas born, Johnny E. Mahaffey’s profile page at betweenthebars.org. Image from Between the Bars.
Behind bars and
blogging for human rights

Martin Luther King Day reminds us about fighting for human rights. It might seem like an oxymoron, convicted criminals blogging for dignity, equality, and inalienable rights, but here’s why it’s not.

For some prisoners, blogging is a lifeline to the world. It is the chance to weigh in on the issues of the day and on the particular concerns of those locked up — often unseen and unheard. It also allows them to learn about social media for the eventuality when 95% will return to their communities.

Prisoners send letters with prose, poetry, and art to blogs; those on the outside comment; replies are then mailed to the prisoners who have the opportunity to respond with new posts. Thus, they see that their ideas matter.

Between the Bars.org (BTB), managed by MIT co-creator and Phd candidate Charlie DeTar, has allowed more than 5,000 prisoners to find voice online. This is a significant number, but DeTar reminds us on BTB that it’s still only 1% of the 2.2 million housed in U.S. prisons and jails.

Joining the Ella Baker Center in Oakland, California, this past December 10, BTB honored the anniversary of the worldwide adoption of the Universal Declaration of Human Rights. They aimed to give prisoners the chance to bring attention to human rights abuses within the walls of the world’s largest incarceration system. The Ella Baker Center, named after Civil Rights heroine, Ella Baker, is dedicated to reducing the U.S. incarceration rate by 50% over the next 10 years.

More than 300 BTB authors and artists participated along with other individuals and groups from across the country. Some of the topics that prisoners blogged about for Human Rights Day included: business and job security; human rights violations behind bars; the inhumanity of solitary confinement; the travesty of juveniles in adult prisons; suppression of dissent from prisoners; electronic intrusions at all hours; the high suicide rate in U.S. prison, and the idea that “there can never be justice on stolen land.”

Johnny E. Mahaffey, born in Texas and currently incarcerated in South Carolina, answered the call to discuss human rights in a piece he titles his “Essayistic Ponderings ”

There are those who believe that prisoners should be removed not only from society, but life itself — all death-penalty arguments aside — into a state of out-of- sight and out-of-mind… and it is this non-existence they seek to impose upon inmates dwelling within the walls of confinement, already removed from their family, and life that they once had — and it is this state of non-existence that contradicts the very thought of “human rights…” Throwing away the key is not an answer to crime, it’s just a lazy way to deal with it…

Mahaffey also says in the same piece that blogging for him is a way to connect with his five children:

Though this blog, they will know always that they were loved, thought of constantly, and that they themselves are in no way to blame for their father’s situation. I may not live long enough to ever see them — prison is dangerous — and these words I type on my typewriter to be mailed out for my blog, could be all that’s left of me.”

Tim Muise, incarcerated at MCI Shirley in Massachusetts, takes on treatment of those behind bars who are gravely ill and near death in a devastating critique, “The Death Chamber — ‘Shirley Style’.” He writes, “Here at the Hospital Unit (HSU), you will see examples of a ‘slow death penalty… feces left in an adult diaper for over 36 hours… Ants were found… maggots…”

A man Muise calls “WB,” was beaten at age 72, thrown into HSU, and Muise maintains, was denied his life-saving medication. “This brought on six separate major heart episodes which required outside hospital attention and major surgeries.”

Maisha Mahalia Durham was one of the few women who responded to the call-out for human rights. Of the nearly 1.5 million housed in state prisons, only 200,000 are women, but there is a considerable body of literature on the particular issues for women behind bars.

Durham, incarcerated in Georgia, is president of a writing group at Pulaski State Prison called “Inkspills” for others like herself, yearning to write. Her blog post for human rights is about the devastating parole system which she has seen keep many prisoners from returning to their communities — in spite of transformation of attitudes and behavior.

While Durham joins a notable group of men and women who seek to publish their words in articles and books, blogging gives her immediacy. Prison bloggers can also earn respect for their ideas and position themselves as knowledgeable, as well as reconnect with a community that has, by and large, abandoned them. One blogger poignantly makes this point on BTB by opening up his post with the words, “Hello World.”

[Jean Trounstine is an author/editor of five published books and many articles, professor at Middlesex Community College, and a prison activist. For 10 years, she worked at Framingham Women’s Prison and directed eight plays, publishing Shakespeare Behind Bars: The Power of Drama in a Women’s Prison about that work. She blogs for Boston Magazine and takes apart the criminal justice system brick by brick at jeantrounstine.com where she blogs weekly at “Justice with Jean.” ]