A man smiled widely and pressed his face against
the slit.’That’s my brother,’ Sofia said, her eyes
filling with tears. 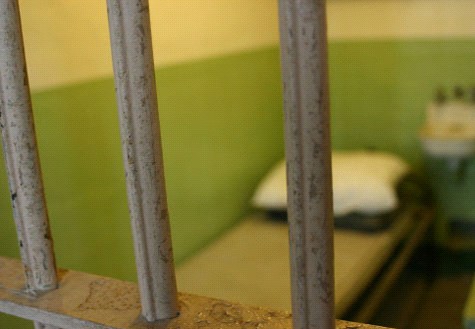 Students look behind the bars at Billerica House of Correction.

Every semester my students from Voices Behind Bars, a class I teach at Middlesex Community College in Massachusetts, go to prison. They used to visit state institutions but now that the Massachusetts state prisons do not offer tours (perhaps because it is a hassle to have outsiders trooping through them and criticizing what they see), the students take a tour of Billerica House of Correction, where they experience confinement to some degree and listen for an hour to an incarcerated man talk about his life and what it is like to be behind bars.

Originally, the Middlesex House of Correction, which was built in 1929, housed 300 men. Now it has more than 1,100, after a $37 million dollar expansion which prison officials say was to accommodate the closing of the Cambridge Jail — not without objection from activists and community members who opposed more prison building (actually costing $43 million per The Lowell Sun.)

I’ve always thought it’s not ideal to have my students learn about prison by going to a place where people are only kept for two and a half years. That’s the county sentence at a house of correction in Massachusetts. Certainly a far cry from a life sentence. I told myself students couldn’t really learn as much about the strains of prison without seeing the harsher conditions that exist in state institutions. That is, until this last visit.

We went through the older part of the facility where cells can get up to 110 degrees.

Most of the tour went as usual. We went through the older part of the facility where cells can get up to 110 degrees in the summer. We saw the visiting room where men talk to their loved ones through glass. The officer who showed the students around Billerica explained that prisoners must walk on the green stripes in the hallways; there were the usual men cleaning with mops and pushing large barrels down walkways; the smell was of too much cleaning fluid. We passed through the health unit where men were waiting to see practitioners and others were isolated in cells. It was prison as usual. 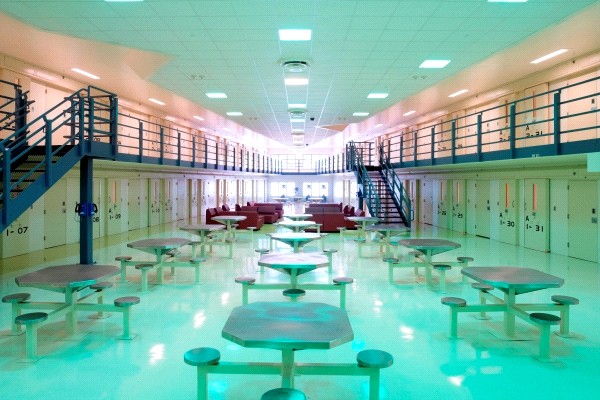 View of a “pod” where inmates live.

We no longer are allowed to see the Hole or what prison officials call the Segregation Unit, since men are there disciplined to solitary confinement which my students know Supreme Court Justice Anthony Kennedy recently said can drive men mad. Therefore, the highlight of the tour is always taking them into what is called a “pod.” A pod is the relatively new term in prison construction where prisoners can live in a contained unit. These pods are somewhat stale and robot-like but they allow the COs the ability to see what is going on.

We entered the pod where men do drug treatment and have earned some privileges.

We entered the pod where men do drug treatment and have earned some privileges. It has the reputation of being a better place to reside than the old part of the institution which is pretty grim and can house two men in a cell. To the left is one old institutional unit at Billerica, looking a little prettier than it really is with whitewashed grey walls, all somehow devoid of color in reality.

The cells have vertical slits for windows.

The new shiny pods don’t look green but they do look empty, i.e contained and controlled. On the one we entered, those incarcerated run some of the addiction groups themselves, we were told. On the tier above the day room where prisoners sit, eat, and play cards at the tables, are rows of cells where men live. Also those living cells are on the first floor all around the room. Each cell has a tiny vertical slit — a window — and when we come into their space, the men inevitably stare out the window at us. At times, they’ve pounded on their doors; at other times, they’ve all been at tables eating lunch, trying to ignore the fact that there are outsiders nearby.

This time, when the 20 of us entered, there were only a few men in their brownish beige uniforms sitting at tables. Another two were talking to the guards who policed the room, two perched at a computerized station at one end. The students all took turns entering a cell to see what it is like, a rather disturbing experience on many levels for most of them. One student, we’ll call her Sofia, suddenly turned toward me as Spanish was heard above us. She pointed up at a window where a man smiled widely and pressed his face against the slit.

“That’s my brother,” Sofia said, her eyes filling with tears.

I looked up and he waved at me,
his sister’s teacher.

I looked up and he waved at me, his sister’s teacher. Sofia looked away.

I asked the young woman if she had known he would be here, and yes, Sofia said, she knew he was in this facility but no, she had no idea she might see him. She seemed torn, wanting to look, wanting to hide. She said under her breath as others continued their entrance into cells, as far as she knew, he had no hope of ever not doing drugs. She’d lost touch, she said. She couldn’t imagine he might be doing OK.

But the young man’s face, lit with joy when he saw her, and before we left that unit, it was almost as if a light went off for her too. Prison became about loneliness, about being apart, about the kind of pain that happens when families break up. It was no longer just about this space or this room or that hallway. Sofia’s brother, as close as he was, was nowhere near his sister. And would not be for a long time, perhaps never. She understood that and so did I.

When we exited Billerica that day, Sofia told the other students about her brother behind bars. Now, after walking through Billerica, and after being with Sofia, they understood something new: prison is not just a physical place, but a deep wound.