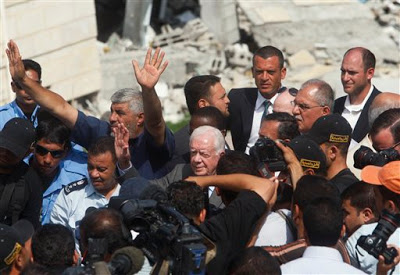 Carter declared: ‘My primary feeling today is one of grief and despair and an element of anger when I see the destruction perpetrated against innocent people. . .’

Jimmy Carter was never one of the great American presidents, and he made a number of errors during his one term (1977-1981), but we have long maintained that he is the best ex-presidents our country has ever had.

He reaffirmed that characterization yesterday (June 16) on a visit to Gaza where he made some stunning comments about the plight of the Palestinian people, and had a meeting with Prime Minister Ismail Haniya of Gaza, who is not recognized by the U.S. or Israel.

Haniya used the occasion to declare his support for a two-state solution to the Israeli-Palestinian crisis: “If there is a real plan to resolve the Palestinian question on the basis of the creation of a Palestinian state within the borders of June 4, 1967 [as called for in the Arab Initiative], and with full sovereignty, we are in favor of it.”

The Hamas leader expressed a favorable view of President Obama’s June 4 speech to the Muslim world in Cairo. “We saw a new tone, a new language and a new spirit in the official U.S. rhetoric,” he said.

Carter, who calls for an end to all violence between Israelis and Palestinians, toured the ruins of Gaza, which remains a shambles months after Israel’s December-January invasion of the Palestinian enclave because of Israel’s blockade. The latest war resulted in the death of 1,400 Palestinian residents — largely civilians, including many children. Israel suffered 14 dead, mainly soldiers, some by friendly fire.

While touring, Carter declared: “My primary feeling today is one of grief and despair and an element of anger when I see the destruction perpetrated against innocent people. . . Tragically, the international community too often ignores the cries for help and the citizens of Palestine are treated more like animals than like human beings.”

Attending the graduation ceremony at the UN School in Gaza City, he commented: “The starving of 1.5 million human beings of the necessities of life — never before in history has a large community like this been savaged by bombs and missiles and then denied the means to repair itself.”

At the debris that remained of the American School, another Israeli target, the former president said “I have to hold back tears when I see the deliberate destruction that has been wreaked against your people.” Noting that the school was “deliberately destroyed by bombs from F-16s made in my country,” Carter said “I feel partially responsible for this as must all Americans and Israelis.

Addressing political leaders in the U.S. and Europe, Carter — who helped bring about the peace treaty between Israel and Egypt 30 years ago — said they “must try to do all that is necessary to convince Israel and Egypt to allow basic goods into Gaza.”

Last month in Damascus [Carter] met Khaled Meshal, the head of the Hamas political bureau and the group’s effective leader. Carter has been meeting Israeli officials and travelled to a Jewish settlement on the West Bank at the weekend as part of his private diplomatic efforts. His visits are not always welcomed by the Israeli government, which has been angered by his meetings in recent years with Hamas.

On Sunday Carter criticised a policy speech given by Netanyahu, in which the Israeli prime minister, responding to weeks of pressure from ­Washington, gave carefully worded approval for a future Palestinian state under strict ­conditions, but insisted “normal lives” should continue in Jewish settlements in east Jerusalem and the West Bank.

“My opinion is he raised many new obstacles to peace that had not existed under previous prime ministers,” Carter said during a visit to the Knesset in ­Jerusalem.

“He still apparently insists on expansion of existing settlements, he demands that the Palestinians and the Arabs recognise Israel as a Jewish state, although 20% of its citizens here are not Jews. This is a new demand.”

But Carter said he had encountered even greater differences with the former Israeli prime minister, Menachem Begin, and had still managed to broker a peace deal between Israel and Egypt. . .