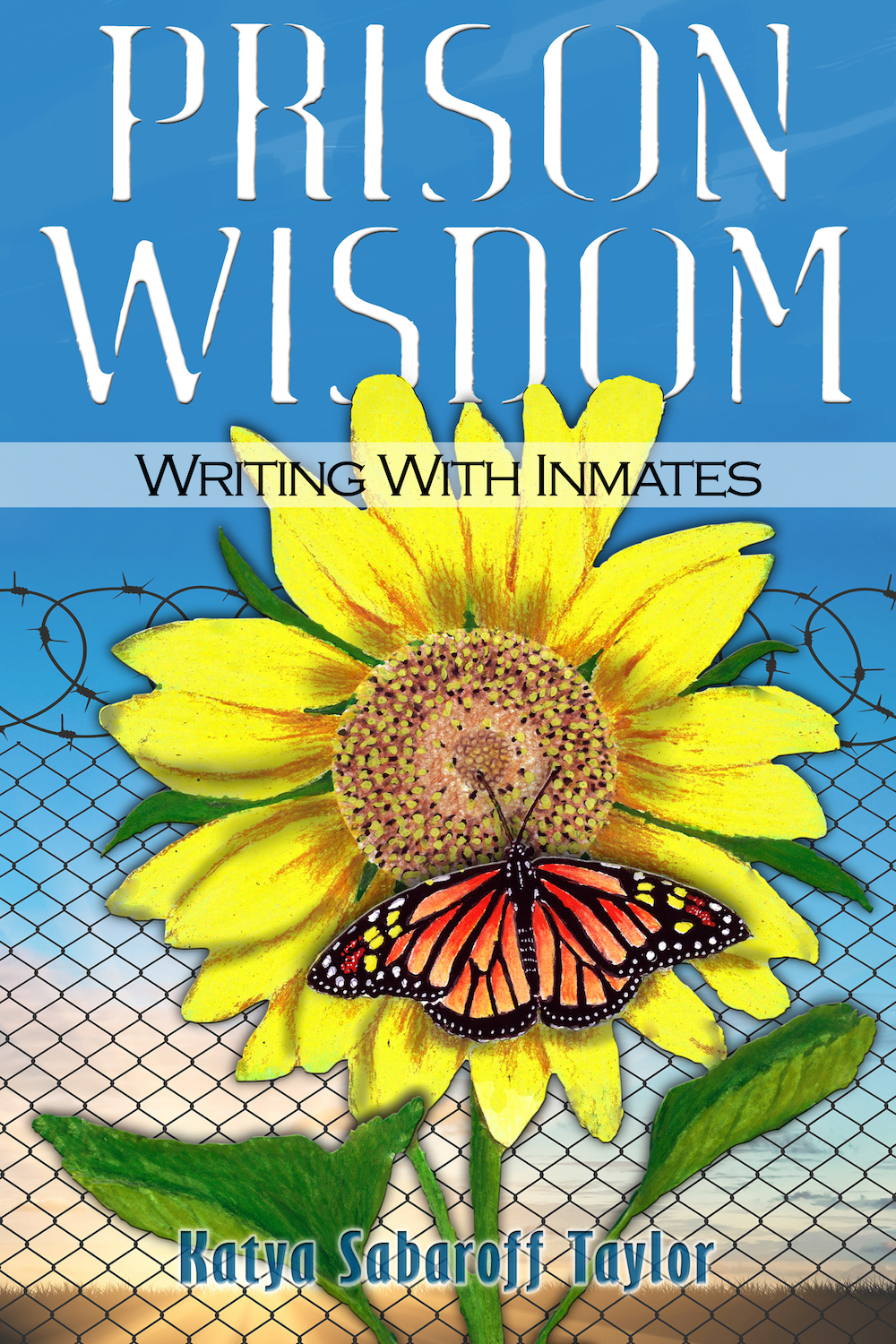 In April 1968, shortly before the assassination of Dr. Martin Luther King, Jr., Nina Sabaroff, a young radical journalist, joined Liberation News Service (LNS), and, for the next three years, belonged to the LNS collective.

Fast-forward several decades to a less rambunctious time when she changed her name to Katya and liberated herself from life in the political lane that she had led for years. “Nina was the raving radical,” she explained to me in an email. “Katya was the healer.” Indeed, as Katya, she became a massage therapist, a yoga instructor, and then a longtime writing teacher who gave workshops in prisons and helped inmates express themselves in words and in images.

Several hundred poems, stories, sketches, and drawings by prisoners are now showcased in Prison Wisdom: Writing with Inmates, a jam-packed volume from EWH Press and available on Amazon, that’s edited by the ex-LNSer who now calls herself Katya Sabaroff Taylor. At the age of 43, and after bouncing about the country, she married Tom Taylor, an expert in conflict resolution and settled down with him in Tallahassee, Florida.

‘Prison Wisdom’ is the work of both Nina the radical and Katya the healer.

Probably everyone who reads Prison Wisdom closely will recognize that it’s the work of both Nina the radical and Katya the healer, and that after all these years, the woman who joined LNS in 1968 is still a liberator at heart.

Her own prose infuses the volume, along with her introductions to the prisoner/authors, plus her clear, concise instructions about how to teach writing behind bars.

“The art and practice of writing and movement heightens self-awareness and offers a renewal of our life energies,” she writes on her website, creativeartsandhealng.com.

The whole book is the collective effort of dozens of people, including Frank Walls, Bryan Mitchell, Jeff Stoner, and the many prisoners themselves who came out of their cells and their shells to express their dreams, hopes, fears, and their appreciation of beauty.

Prison Wisdom can be used as a handbook for those who want to do what Katya Sabaroff Taylor has done for decades unselfishly, neither publicizing herself nor bragging about her experiences with convicted felons serving time.

She taught both men and women and in state as well as in federal prisons, and she did it with the cooperation of the authorities who, she explains, gave her “permission to call my students by their first name… and they were allowed to call me ‘Katya,’ rather than ‘Mrs. Taylor.’” She adds, “This may seem like a small thing, but it created an intimacy that encouraged each of us to write — and share — from the heart.”

She’s one of many dedicated individuals who have gone behind bars fearlessly.

You won’t find Taylor written about in any of the current books, such as Terry Allen Kuper’s Solitary, about life in American prisons, though she’s one of many dedicated individuals who have gone behind bars fearlessly, and with the belief that everyone has creativity and wisdom locked inside that’s just waiting to be liberated.

Prisoners such as Mumia Abu Jamal, the author of Live from Death Row (1996), have continued to write and publish remarkable books.

None of the writers represented in Prison Wisdom are as well known as Cleaver, Jackson, Trantino, and Mumia, and none of them express themselves as lyrically and as powerfully as those giants of prison literature.

But that doesn’t mean they aren’t worthy of publication, distribution, and introduction to the reading public. Prison Wisdom provides a glimpse into the hearts and minds of men and women behind prison walls who have not reached the TV news or the Internet. In a way, they’re a cross section of the American prison population in the U.S.A. today.

Indeed, as this book amply illustrates, there are no ordinary prisoners; each one is distinct. Everyone has a voice of his or her own, including the editor herself. In “I AM” she writes “I am the thunderbolt at the top of the mountain/I am the tune you can’t stop humming.”

In “Childhood Friend,” a prisoner named Pauline remembers a time “when race weighed more then friendship.” Another prisoner, Rose, writes about her own self-denial and her self-affirmation in “Sometimes I Forget” that ends “Sometimes I forget that within me lives a person that deserves love, compassion and just friends that truly love her to the end.”

Nearly every human emotion is
expressed in the poems.

Nearly every human emotion — sadness, grief, anger, love, and more — is expressed in the poems, and while they’re not overtly or loudly protest literature they celebrate the compassion and the dignity of all prisoners under barbaric circumstances.

In “I Remember a Room,” Mahlona describes a moment at the end of her trial when a judge sentenced her to 211 months in federal prison. Then she immediately calculated how many years and days that added up to.

Katya makes a comeback in “Cast of Characters” in which she remembers herself dancing in the womb. Then, Angela seems to sum up the feelings of her fellow prisoners when she says that while their bodies are locked up, their minds are free to escape “bondage.”

At the end of the book, Katya includes some of her correspondence with prisoners such as Cronos who looks back at his whole life and explains, “I was not raised to be a killer or drug addict or convict.”

That sentence could be the start of a whole memoir or a hefty novel about a young man or woman who becomes everything he or she doesn’t want to become.

Reading the work in Prison Wisdom might provide ideas for writing as well as the inspiration to sit down and do it.

Near the end of the book, Katya offers useful comments that a beginning writing teacher might say to students on the first day: “Everyone shares, everyone listens.”

In 2000, in an essay titled “Reminiscences of Liberation News Service,” she wrote about “Collective life, communal meals, trips to the LNS farm, marches, demos, late night boogies at one of our communal apartments.” She added, “Who has time to sleep.” Not surprisingly, she published those reminiscences under the name, “Katya Nina.” Prison Wisdom reflects the author’s own wisdom born of a lifetime of giving and sharing.

[Jonah Raskin, professor emeritus at Sanoma State University and regular contributor to The Rag Blog, is the author of For the Hell Of It: The Life and Times of Abbie Hoffman. He wrote for LNS from 1967-1973.]