Henry Mecredy :
BOOKS | ‘The End of Loyalty: The Rise and Fall of Good Jobs in America’

Rick Wartzman reviews the socioeconomic history of the U.S. since World War II with empathy for the employee class. 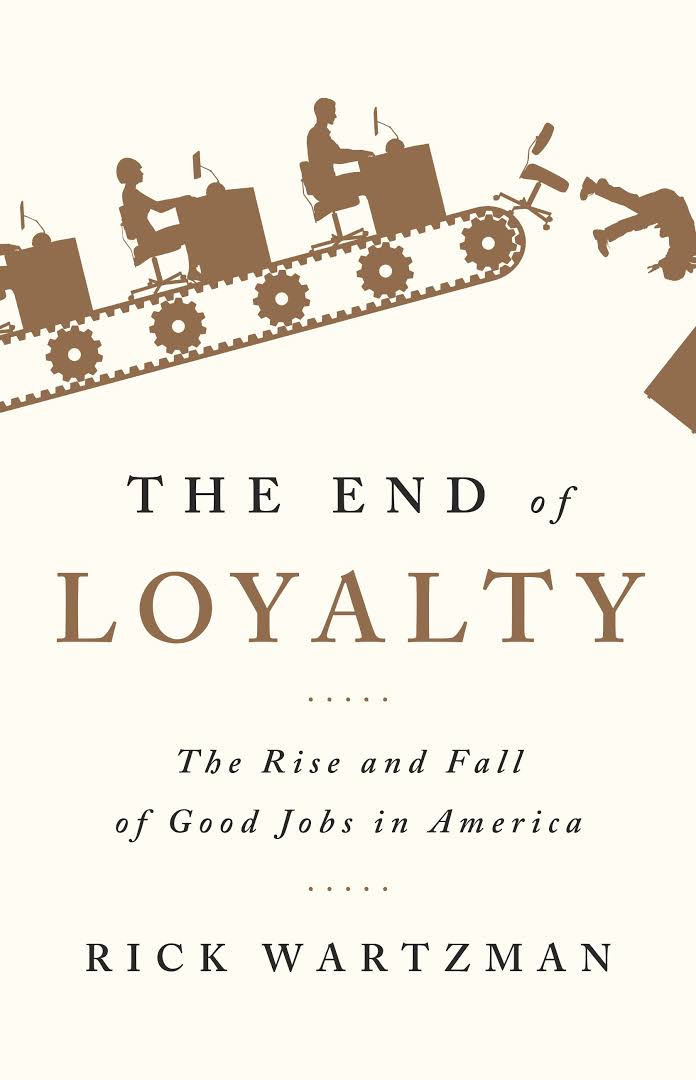 In this readable though longish book, Wartzman reviews the socioeconomic history of the U.S. over the decades since World War II, using four major corporations as his examples. Along the way he introduces several corporate heads with idiosyncracies ranging from charming to alarming.

It’s not a very nice picture since, as is well known, this period brought prosperity followed by decline to the average American. In more than a coincidence it brought prominence followed ultimately by powerlessness to the U.S. labor establishment.

Wartzman’s empathy for the employee class is clear. He cites case after case of individuals and groups brought to suffering as the society, already split along class lines, after about 1960 increasingly divided along the lines of material good, with declines of real wages and of expectations from one generation to the next, and greater disparities between owners and employees.

There’s a tragedy embedded in the story, in the acquiescence of American mainstream labor to the postwar arrangement under which unions bargained only about wages, benefits, working conditions, and the like. For example, in March 1945, the U.S. Chamber of Commerce and the labor organizations AF of L and CIO “signed a seven-point charter that acknowledged ‘the inherent right and responsibility of management to direct the operations of an enterprise,’ as well as ‘the fundamental rights of labor to organize and engage in collective bargaining.’” (Page 54)

Mainstream labor sought only a ‘bigger piece of the pie.’

Mainstream labor — excluding racial and ethnic outcasts, of course — sought only a “bigger piece of the pie” and agreed not to seek a major role in the meal planning or the formulation of the recipe. This explicitly limited the definition of democracy under which the society proceeded into the second half of the century. Any kind of socialistic radicalism was successfully suppressed and anathematized.

George Meany, AFL-CIO president and what passed for a labor leader in the era, confirmed the setup: “’In the final analysis, there is not a great deal of difference between the things I stand for and the things that the National Association of Manufacturers stands for.’”(82)

It doesn’t seem odd, then, that whatever loyalty might have been expressed between corporations and their investors, and the labor they needed, was an asymmetric form of loyalty, with only one side being in a position to downgrade or cancel it. Instead of being real partners, American middle-class workers found themselves disciplined by a hard and bitter peace, trapped in a long twilight struggle orchestrated by others.

In the attenuated form of democracy we enjoy, it is only the employer that is empowered to make the decisions regarding initial and continuing employment. But more fundamentally, it is only the Employers as a class who are empowered to make the decisions about investment; about what shall be manufactured and where and when; about what services shall be provided; about what technologies will be researched and developed; about how interactions with other economies and societies will be conducted. If there is a price to be paid, in general employees pay it.

Yet, after spending 350 pages outlining a 70-year crumbling of the so-called social contract, relating in heartbreaking detail the destruction of the lifestyles of millions of Americans, the best Wartzman can offer in the way of encouragement is two pages of pathos exhorting our government and corporations to do better; even to return to the glorious days of yesteryear.

“We can’t mandate that executives think the way they used to,” he writes; we must do more “if we are to come to grips with the most pressing issue of our time: distributing the nation’s economic gains more broadly.”(362) By comparison with a democratically-controlled economy this prescription is awfully lame.