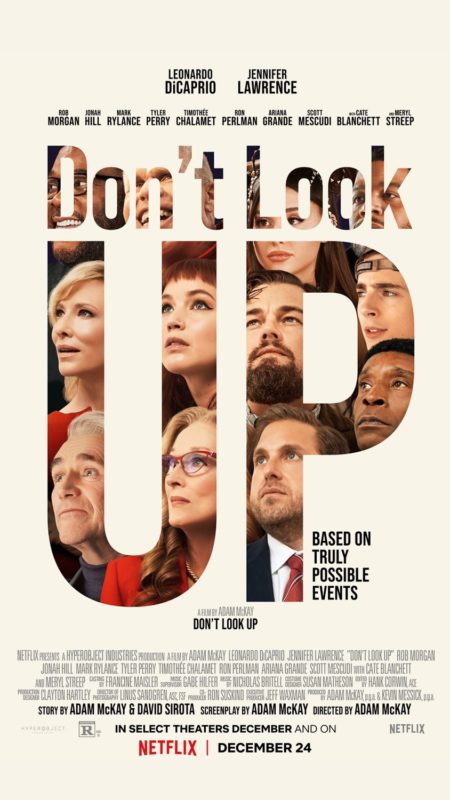 I had heard about Don’t Look Up (Netflix, 2 h 18 m) the new apocalyptic science fiction film, but I didn’t watch it until The Rag Blog’s trusty editor, Thorne Dreyer, invited me to watch it and review it. I’m a glutton for punishment, especially if it involves watching movies at home on the screen of my computer, which admittedly isn’t the same as watching on a giant screen in a theater.

One day when it’s safer than it is now, I’ll take myself to my local multiplex, buy popcorn, hunker down in my seat and enjoy the colorful images. Like 2001, a Space Odyssey, Dr. Strangelove and Blade Runner, Don’t Look Up demands to be viewed on a giant screen. But if the only way you can see it is at home, do that. Don’t wait for ideal conditions.

We don’t know for sure what the future has in store for us and for our dear battered planet Earth, though if we’ve been listening to Greta Thunberg, the Swedish teenager, who has been urging action on climate change, the prognosis is bad. In Don’t Look Up, the politicians and the talking heads don’t listen, at least not initially, to the scientists (two astronomers) who warn about a comet that’s headed toward Earth and that, they say, will cause the kind of disaster only seen so far in science fiction movies.

The ending offers a cinematic spectacle that has to be
viewed and processed.

I urge everyone to see the movie for at least half-a-dozen reasons. The special effects are way better than the special effects in Star Wars, which now seems clunky. The ending — I mean the last 45 minutes — offers a cinematic spectacle that has to be viewed and processed. Don’t stop watching when the credits begin to roll. There’s more to be seen and heard, all the way to the very end. I’m not gonna spoil it for anyone.

I found the very beginning underwhelming, though I enjoyed the fine performances by Leonardo DiCaprio, Meryl Streep, Jonah Hill, Cate Blanchett and especially Jennifer Lawrence who has a face that reflects a wide variety of emotions. Timothee Chalamet is terrific in the role of an American teenager who wears his cap backward, and Mark Rylance is marvelous as Peter Isherwood, a character reminiscent of Elon Musk.  The picture gets better as it moves forward in time.

Don’t Look Up is, as I mentioned above, apocalyptic science fiction, but it’s also biting satire. There isn’t anything in American society today that isn’t skewered. The politicians are pathetic, the talking heads are horrific, the American consumers are idiotic, the flag-waving patriots absurd and technology a false god. The future that’s depicted is terrifying, but it’s also beautiful.

When the world does end, this picture suggests, it will be a spectacle well worth watching, and it must be said that the ending isn’t totally a bummer. Some of the last scenes show Randall Mindy (Leonardo DiCaprio), Jennifer Lawrence (Kate Dibiasky), also Randall’s loving and forgiving wife, June ( Melanie Lynskey) plus Dr. Teddy Oglethorne (Rob Morgan) sitting down to dinner together, enjoying food, telling and listening to stories and relishing one another’s company.

If the world is going to end, we might as well do our best
to remain civilized.

If the world is going to end, this film suggests, we might as well do our best to remain civilized and civil to one another and not forget some of the simple joys of life.

Whether Don’t Look Up changes the ways humans behave remains to be seen. Orson Wells’ radio show The War of the Worlds (based on H. G. Wells’s novel of the same name) terrified listeners when it was first broadcast in 1938, on the cusp of World War II. People panicked, but that was when radio was still a fairly new medium and listeners didn’t know how to distinguish fake news from real news.

Come to think of it, many people still don’t know how to distinguish the real from the fake. Hey, maybe Don’t Look Up is news from the future, not science fiction.

Director Adam McKay surely wants to wake and shake viewers, and to make them think that catastrophe is around the corner and that we don’t have much time left.

Humans have thought about apocalypse ever since the Old Testament and perhaps before then. The world has always been ending ever since it was born. It is ending now perhaps more obviously than at any time in human history.