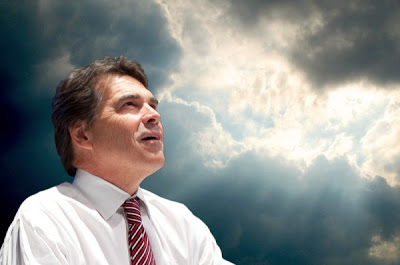 Conservatives claim the ‘Texas Miracle’ is a model for the nation, but it’s actually a blueprint for winning the race to the bottom.

Conservative mythology now holds up Texas as a shining example of right-wing governance in action. Republicans would have us believe that gutting the state’s social safety net, denying workers the right to bargain collectively, and relentlessly cutting taxes unleashed a torrent of “job creation” and, ultimately, prosperity.

Under Governor Rick “Goodhair” Perry’s term in office, Texas has indeed been a model of conservative governance, but the truth is that it has resulted in anything but prosperity for the people of the Lone Star State. In fact, Texas is not only a complete basket-case, it would be faring far worse today without the help of policies enacted by Democrats at the federal level — policies Perry lambasted as “irresponsible spending that threatens our future.”

The kernel of truth on which the tale of the Texas Miracle is built is that the state has in fact added a lot of jobs over the past decade. In a gushing lead editorial, the Wall Street Journal noted that “37% of all net new American jobs since the recovery began were created in Texas.” The Journal then spun that fact like this:

Capital — both human and investment — is highly mobile, and it migrates all the time to the places where the opportunities are larger and the burdens are lower. Texas has no state income tax. Its regulatory conditions are contained and flexible. It is fiscally responsible and government is small. Its right-to-work law doesn’t impose unions on businesses or employees.

In the Journal‘s hyper-partisan view, the lesson to be learned is that “the core impulse of Obamanomics is to make America less like Texas and more like California, with more government, more unions, more central planning, higher taxes.” That spin was echoed during last week’s GOP debate by none other than Newt Gingrich, who asked, “Why [would] you want to be at California’s unemployment level when you can be [at] Texas’s employment level?”

James Galbraith, an economist at the University of Texas, scoffed at the whole narrative, telling AlterNet, “the notion that our state government is a model is almost enough to beckon the spirit of Molly Ivins back from the shades.” Galbraith said “Texas has been a low-tax, low-service state since the time of the Republic,” and noted that it’s “therefore impossible that this fact suddenly accounts for its better job performance over the past few years.”

(Texas’ record of job creation under Perry is the same as it was under former governor Ann Richards, a Democrat.)

“Texas is an energy state benefiting from high oil prices and the incipient boom in natural gas,” explained Galbraith. “That’s an accident of nature.” He added that the state “went through the S&L crisis, had major criminal prosecutions and more restrictive housing finance regulations this time around; hence it was not an epicenter of the subprime housing disaster. That’s called a learning experience.”

Tighter regulation of the lending industry is also anathema to today’s GOP.

Arguably the biggest sleight-of-hand in the Texas Miracle storyline, however, is that many of those jobs were a result of a huge surge in the state’s population, much of it fueled by immigration from Latin America (rather than liberal hell-holes like California).

Texas’ population grew by 20 percent over the past decade, and Hispanics accounted for almost two-thirds of that growth. A surge in people created greater demand for goods and services, which leads to more jobs. But the jobs being created in Texas aren’t keeping up with the state’s expanding workforce — the Wall Street Journal somehow failed to mention that during the exact same period in which it was adding all those new jobs, Texas’ unemployment rate actually increased from 7.7 to 8 percent. (It also failed to note that 23 states — including such deep blue ones as Vermont, New York and Massachusetts — enjoy lower unemployment rates than Texas.)

But perhaps the most laughable claim in this whole narrative is that Texas has been “fiscally responsible.” Perry certainly adhered to the conservative playbook, offering massive tax breaks without the deep cuts in services that might inspire a voter backlash. As a result — an entirely predictable one — the Austin American-Statesman reported that “state lawmakers have spent much of the year grappling with a budget shortfall that left them $27 billion short of the money needed to continue current state services.”

CNN adds that while Perry was railing against the Democratic stimulus package passed over the fierce resistance of conservatives, the state “was facing a $6.6 billion shortfall for its 2010-2011 fiscal years,” and “it plugged nearly all of that deficit with $6.4 billion in Recovery Act money.”

The stimulus package created or saved 205,000 jobs in Texas, second only to California. But as James Galbraith told AlterNet, while “the state budget has not yet been cut drastically” due to the stimulus boost, “the key phrase is ‘not yet.’” Now that the stimulus has run its course, “if projections for the current budget cycle are correct, things will get much worse in the next year.”

Indeed, those cuts are now on their way. The Texas legislature imposed draconian cuts to Medicaid, cut tuition aid to 43,000 low-income students, and is weighing $10 billion in cuts to the state’s education system. According to Texas state senator Rodney Ellis, D-Fort Bend, the 2012-2013 budget will underfund “health and human services in Texas by $23 billion, 29.8 percent below what is needed to maintain current services.”

[But] the funds have been controversial. They have channeled millions of dollars to companies whose officers or investors are major Perry campaign donors and Perry has allowed them to keep their subsidies in many cases even when they fail to deliver promised jobs. More important for the purposes of judging Perry’s job-creating record, even those that do produce jobs don’t necessarily create long-lasting ones, or increase the state’s overall prosperity.

In a report written for Perry last spring, Michael Porter of Harvard Business School noted that such tax breaks “ultimately don’t support long-term prosperity,” because companies that can move easily “are looking for the best deal and when the deal runs out they move” again, taking their jobs with them.

He also found that Texas’ per capita income growth was the eighth slowest of any state in the country between 1998 and 2008. That’s because, as the American Independent‘s Patrick Brendel noted, “Texas has by far the largest number of employees working at or below the federal minimum wage,” and the number of crappy jobs has exploded while this supposed Texas Miracle was taking place.

“From 2007 to 2010, the number of minimum wage workers in Texas rose from 221,000 to 550,000, an increase of nearly 150 percent,” wrote Brendel. As a result, Texas is now “tied with Mississippi for the greatest percentage of minimum wage workers, while California had among the fewest (less than 2 percent).” It should be noted that the cost of living is higher in California than in Texas.)

At a fundraiser this week, Rick Perry, who despite toying with the idea of secession in the past may now be eying a White House bid, told a group of Republican fat-cats that in his state, “you don’t have to use your imagination, saying, ‘What’ll happen if we apply this or that conservative principle?’ You just need to look around, because they’ve been in play across our state for years, generating real results.”

In this, Perry is absolutely, 100 percent correct. He slashed taxes to the bone, handing out credits to his political cronies like they were candy. He decried the evils of Big Government while hypocritically using federal stimulus funds to help close Texas’ budget gap in the short term, and now he’s using the state’s longer term fiscal disaster — one of his own creation — as a premise for destroying an already threadbare social safety net serving the neediest Texans.

As a result of these policies, plus immigration and other external factors, his state’s added a lot of low-paying poverty jobs without decent benefits. He’s added very little in the way of “prosperity.”

In the final analysis, Texas is indeed a shining example of conservative governance, as well as an almost perfect model for winning the race to the bottom.

[Joshua Holland is an editor and senior writer at AlterNet. He is the author of The 15 Biggest Lies About the Economy: And Everything else the Right Doesn’t Want You to Know About Taxes, Jobs and Corporate America. This article was published at and distributed by AlterNet.]

1 Response to Joshua Holland : Governor ‘Goodhair’ and the ‘Texas Miracle’