Just Another Day in Mosul 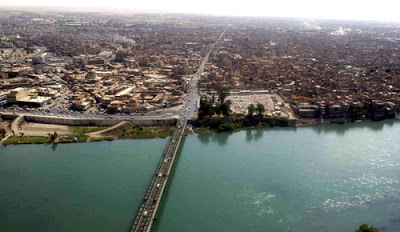 Mosul, capital of the Ninawa Governorate, especially the right side of the city [preceding five words as heard], is suffering from a shortage of piped water, because the purification stations stopped working due to the fact that pumps cannot pump water from the Tigris River, as its water level has dropped.

A source in the governorate said that the cut-off of water supplies on the right side of the city [preceding five words as heard] might last for a few days, noting that this has something to do with bringing about an increase in the water level of the river.

For his part, an official source at the Water Resources Directorate in Mosul said that the drop in the water level of the Tigris River is due to the dry season that Iraq experienced this year and the shortage of rainfall and snowfall in the northern region last winter, which decreased the number of the tributaries feeding the river.

This entry was posted in RagBlog and tagged Iraq. Bookmark the permalink.

1 Response to Just Another Day in Mosul