We should face up to the failure of the War on Drugs as public policy and seek a better way that is consistent with individual rights and personal responsibility. 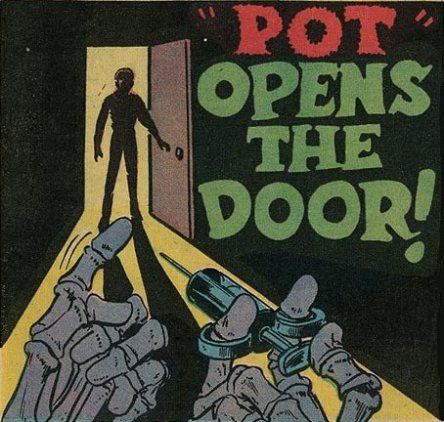 There are three good reasons, apart from getting high, to support the legalization of marijuana (cannabis) in the U.S.: it has medical uses; it will correct one of the most egregious injustices in the criminal justice system — the racial disparity in arrests, prosecutions, and sentencing; and it will allow again the cultivation of industrial hemp in the U.S.

Lately, since the popular votes in Colorado and Washington favoring the legalization of marijuana, many talking heads and pundits are weighing in on marijuana use and abuse. Back in the 60s, every pothead I knew thought that we were just months, or at most a couple of years, away from legalization (or at least decriminalization) of marijuana use. They were as wrong about that issue as many pundits today are wrong about marijuana legalization, although a few seem to understand, at least in part.

Yet the federal government, until now, has refused to take a watchful attitude about this development and prefers to harass growers, suppliers, and users in those areas. What is intellectually, scientifically, and ethically worse is the federal government’s continuing refusal to acknowledge the abysmal lies that have been told about marijuana for nearly 80 years.

The most recent movement to legalize marijuana began with medical marijuana use, done in defiance of federal laws and regulations.

The most recent movement to legalize marijuana began with medical marijuana use, done in defiance of federal laws and regulations that wrongly maintained that there were no medical uses for marijuana. To make sure that no researchers could easily develop medical uses, the feds kept marijuana on the most restrictive drug list, declaring that there were no medicinal uses for it. This was true even after Marinol, a synthetic marijuana, was approved by the FDA in 1985 for alleviating nausea and vomiting, and stimulating appetite.

Talking heads and pundits now make these claims about marijuana:

1. David Brooks, whose persona is “I’m the most reasonable, thoughtful conservative in America,” thinks that legalization will interfere with people becoming all they want to be. This is in spite of the fact that he used marijuana during his teenage years for “a little while” and found that it “deepened” his friendships with his comrades. Maybe that marijuana use accounts for his extreme seriousness as an adult, but it doesn’t explain the double standard he now applies to everyone else: he opposes legalization for the rest of us.

2. Washington Post columnist Ruth Marcus follows closely in Brooks’ footsteps. She thinks society will be better off without another mind-altering substance. Her concern is mainly with use in adolescence (with a possible effect of reducing IQ levels in developing brains), something she believes will be difficult to prevent if it is available to adults and medical users.

She may be right, but in my experience adolescents have had little trouble finding marijuana during its prohibition. It is difficult to see this concern as anything other than a seemingly reasonable statement without evidence to support it. Besides, when has anything else legal for adults — whether drugs, alcohol, tobacco, caffeine, or sex — been prohibited because kids might be able to get it?

At least Marcus concludes that “Throwing people in jail for smoking pot is dumb and wasteful.” But she doesn’t say what we should do instead.

3. The American Medical Association (AMA) continues to be a consistent voice against marijuana legalization, echoing the federal government’s ridiculous claim that it is a “dangerous drug” — as dangerous as heroin. The AMA continues to promote the canard that “Early cannabis use is related to later substance use disorders.”

In my experience, 100% of licit and illicit drug abusers started out with the mind-altering or central nervous system stimulating substances caffeine, tobacco, and alcohol. Those substances have paved the way for many a drug abuser, who could move on to marijuana and other drugs if they chose.

As with all potentially abusable substances a small percentage of people become abusers.

As with all potentially abusable substances a small percentage of people become abusers — averaging about 15% according to neuropsychopharmacologist Dr. Carl Hart, whose research into drug addiction is the source for his new book, High Price: A Neuroscientist’s Journey of Self-Discovery That Challenges Everything You Know About Drugs and Society.

Hart is an Associate Professor of Psychology in both the Departments of Psychiatry and Psychology at Columbia University, and Director of the Residential Studies and Methamphetamine Research Laboratories at the New York State Psychiatric Institute.

Hart explains his understanding of addiction:

I have come to believe that we should legalize or at least decriminalize marijuana use. The way we enforce marijuana laws is unconscionable. The arrest rates for possession are astoundingly and shamefully different for whites and African Americans. The incongruence between what our statutes require and what Americans actually do cannot be sustained.

Dionne arrived at this conclusion by looking at the data, which show that while marijuana use among African-Americans and whites is nearly the same — 14% versus 12% respectively — African-Americans are almost four times more likely to be arrested for marijuana possession, an inexcusable law enforcement disparity.

5. The not-so-brilliant congressman-turned-talk show host Joe Scarborough opposes marijuana legalization because it makes people stupid and is a gateway drug. He says this not because of his experience with illegal substances (he claims none), but from his seventh grade experience in a boy band, followed by watching his friends over the next 30 years. This opinion is about as informed as that of former Congressman Patrick Kennedy, a reformed drug addict and founder of a program to help people stop using marijuana.

Those who use personal addiction experiences to justify public policy about drugs are appealing to authority where none exists. Dr. Carl Hart explains: “Because you are an addict does not give you some special insight about addiction.” For insight, we should trust science, not personal experiences, which are fraught with confirmation bias.

6. Industrial hemp used to be a significant U.S. farm crop, from which we made uniforms, rope, and canvas for the Army during World War II. It is a plant related to marijuana, but without any significant amount of THC, the active ingredient that makes marijuana popular among some people. It can be used to produce rope and twine, clothing, paper, building materials, and nutritional products.

For industrial hemp to make a comeback in the U.S., modern processing plants would have to be built. But prohibiting its cultivation is nonsensical, justified only by the prohibition against marijuana.

7. Disparate enforcement of marijuana laws is one of the best reasons to support legalization, mainly because there is no way to eliminate the racism inherent in our culture in the foreseeable future. In 2012, more than 700,000 people were arrested for marijuana-related offenses. That’s five people arrested every 3-1/2 minutes. What an abysmal waste of our tax dollars. Marijuana arrests make up almost half of all drug arrests.

My experience with law enforcement has helped me understand that many police officers often get an incredible high from participating in drug busts.

My experience with law enforcement, both as an adviser to police departments and as a criminal defense attorney, has helped me understand that many police officers often get an incredible high, not from smoking weed, but from participating in drug busts.

I remember one search, under warrant, of a home where a few marijuana plants were being grown for personal consumption that occupied a squad of officers for an entire shift. They even ordered in pizza for lunch. They not only invaded the privacy of the family in obscene ways, they broke an antique door and did other property damage during their search. Because of the overzealous persecution of the family, in violation of their constitutional rights, no one was convicted of anything.

It is experiences like these that have led me to ignore whatever law enforcement has to say about drugs, especially marijuana. It is the least credible community about drug laws that I have seen.

According to research by the Open Society Foundations, the so-called War on Drugs in the U.S. “costs at least $100 billion” a year. These efforts and the policies that support them have created criminal markets, and affect the economies of both the producer and recipient countries “by deterring investment, harming legitimate businesses, and undermining governance through corruption and violence.”

Wealthy user countries rely on “marginalized people” in poor countries to “produce, transport, and sell” illegal drugs “in order to survive.” The report asserts that, without the end of global poverty and the demand for drugs, “there is no realistic hope of eliminating supply.”

Any government policy that does not take all these factors (and more) into account to decide drug policies is doomed to continued failure. U.S. drug policies seem to be driven primarily by the law enforcement-prison complex, which relies on the War on Drugs to increase its budgets from year to year, thus ensuring its continued existence and increasing employment of its agents and officers.

As I was writing this column, President Obama indicated in an interview published by The New Yorker that his views are closer to the ones I have expressed than the views of any president in my lifetime. So there may be hope of drug policy changes at the federal level sooner rather than later. But President Obama’s opinions don’t always get translated into policy.

Recent small changes in our public policies in a few states (Texas included), which have led to a few prison closures, are steps in the right direction, but they are woefully inadequate to correct the injustice and inequality inherent in our approach to drugs. Most of our public officials seem incapable of making the needed changes.

Perhaps the state initiatives that have changed policies toward marijuana will eventually lead to the dismantling of the War on Drugs. In their place, we could have policies that provide treatment where needed and wanted for people with addiction problems, and otherwise allow adults to make their own decisions about their personal drug use based on the liberty guaranteed by the Constitution.

Although I have no interest in the recreational use of marijuana, I see substantial reasons for legalizing, or at least decriminalizing it. The War on Drugs has been a disaster socially and economically. We should face up to its failure as public policy and seek a better way that is also consistent with our support for individual rights and personal responsibility.