Lamar W. Hankins : Gun Control and the Ethics of Self-Defense 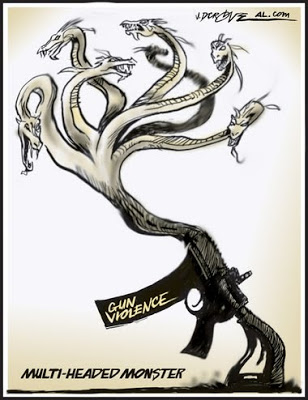 Much of this will seem counterintuitive, especially to those who are brought up with a macho mentality, whose inclination will be to fight, get revenge, teach the hoodlum a lesson…

Since I last wrote about gun control in the middle of December, I have continued to read and gather as many facts as I could find that might contribute to real solutions to the gun violence that is so prevalent in the United States. What I have read and what I understand leads me to conclude that there may be a few ways to reduce gun violence and the number of deaths from guns, but that is far from certain.

A poem by Carl Sandburg that was just discovered in the archives of the Rare Book and Manuscript Library at the University of Illinois at Urbana-Champaign suggests a view of guns from an ethical perspective:

Here is a revolver.
It has an amazing language all its own.
It delivers unmistakable ultimatums.
It is the last word.
A simple, little human forefinger can tell a terrible story with it.
Hunger, fear, revenge, robbery hide behind it.
It is the claw of the jungle made quick and powerful.
It is the club of the savage turned to magnificent precision.
It is more rapid than any judge or court of law.
It is less subtle and treacherous than any one lawyer or ten.
When it has spoken, the case can not be appealed to the supreme court,
nor any mandamus nor any injunction nor any stay of execution in and
interfere with the original purpose.
And nothing in human philosophy persists more strangely than the old belief
that God is always on the side of those who have the most revolvers.

Sam Harris, who is an author, philosopher, public intellectual, and neuroscientist, also proposes an ethical framework from which to consider self-defense and guns. Most people I know who want a gun or guns for protection (self-defense) don’t consider that the decision has ethical dimensions, but it does. How those ethical dimensions fit into a discussion about gun control is what interested me in Harris’s thoughts on the subject.

To begin his discussion of the ethics of self-defense, Harris cites the data: “In 2010, there were 403.6 violent crimes per 100,000 persons in the United States… Thus, the average American has a 1 in 250 chance of being robbed, assaulted, raped, or murdered each year. Actually, the chance is probably greater than this, because we know that certain crimes, such as assault and rape, are underreported.”

Harris begins with the premise that “dialing 911 when an intruder has broken into your home is not a strategy for self-defense.” He suggests three principles relevant to self-defense:

Principle #1: Avoid dangerous people and dangerous places.
The primary goal of self-defense is to avoid becoming the victim of violence. The best way to do this is to not be where violence is likely to occur. Of course, that’s not always possible — but without question, it is your first and best line of defense. If you visit dangerous neighborhoods at night, or hike alone and unarmed on trails near a big city, or frequent places where drunken young men gather, you are running some obvious risks.

Principle #2: Do not defend your property.
Whatever your training, you should view any invitation to violence as an opportunity to die — or to be sent to prison for killing another human being. Violence must truly be the last resort… Unless you or another person is being physically harmed, or an attack seems imminent, avoiding violence should be your only concern.

Principle #3: Respond immediately and escape.
If you have principles 1 and 2 firmly installed in your brain, any violence that finds you is, by definition, unavoidable. There is a tremendous power in knowing this: When you find yourself without other options, you are free to respond with full commitment.

Harris offers what he considers the core principle of self-defense:

Do whatever you can to avoid a physical confrontation, but the moment avoidance fails, attack explosively for the purposes of escape — not to mete out justice, or to teach a bully a lesson, or to apprehend a criminal. Your goal is to get away with minimum trauma (to you), while harming your attacker in any way that seems necessary to ensure your escape.⁠

One very practical thought that Harris offers is to remember that “anyone who attempts to control you — by moving you to another room, putting you in a car, tying you up — probably intends to kill you (or worse).

Much of this will seem counterintuitive, especially to many men (and some women) who are brought up with a macho mentality, whose inclination will be to fight, get revenge, teach the hoodlum a lesson, or assure that he is prosecuted for his criminal behavior.

For those with special martial arts training, there may be a tendency to think that this is what the training was for. But for every person with a black belt in Jui-Jitsu or another martial art, there is a story that did not end well for the trained victim. After all, no one is really as good as Jack Reacher.

But Harris appreciates martial arts training because it may help a person respond more quickly to the threat, provide a person with more confidence, provide psychological and social benefits, and give a person the mental preparation necessary to focus on what is most important — escape from the danger.

All of Harris’s arguments about self-defense and guns can be read at the following links:

Even in a home invasion, where many gun owners think that they can repel the attacker or attackers with a weapon, reality does not support such a proposition. Harris reminds us that the police, who are trained to remove an invader from a house, will approach their task with perhaps five officers, heavily armed and in protective gear. The average homeowner cannot come close to matching their level of skill and equipment, and, unless everyone in the family has managed to escape, they will all be in great danger.

Harris’s views on self-defense help inform a discussion about dealing effectively with violence, especially gun violence (though Harris also discusses knife violence). Over 300 million guns are in circulation in the U.S. There is little likelihood that their number will diminish. In fact, in December, there were 2.2 million new background checks for gun purchases. Not only will lots of the good guys have guns, but probably most of the bad guys will have guns, also.

As a good guy, according to Harris, I have to make a practical and ethical decision about whether to own a gun or guns, “given my specific security concerns and the level of violent crime in the society in which I live.” For Harris, who lives in the Los Angeles area, “[t]he choice to own a gun comes down to this: If I hear a window break in the middle of the night, I want to be armed with more than my idealism.”

I have no quarrel with the gun-control recommendations of the Obama administration, with the exception made above regarding the size of ammunition magazines. Neither Obama’s proposals nor mine will make this a perfect and safe society, but it is better to have public policy set for the protection of the vast majority of Americans than to please the NRA and the gun manufacturers for which it shills.

2 Responses to Lamar W. Hankins : Gun Control and the Ethics of Self-Defense