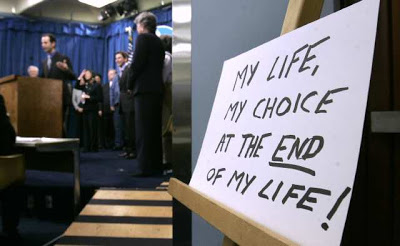 Image from Crooks and Liars.
When religion restricts our freedom:
Catholic bishops and aid in dying

The United States Conference of Catholic Bishops recently revised its policies concerning the care for the seriously ill and dying. While the bishops’ views about aid in dying for the terminally or seriously ill apply only to Catholic health care institutions, the bishops want their beliefs applied to the entire society. They clearly state this position in “A Statement on Physician-Assisted Suicide” issued on June 16, 2011.

In their statement, the U.S. bishops declared suicide “a terrible tragedy, one that a compassionate society should work to prevent.” Clearly, the bishops believe that the rest of our society should follow their beliefs on this subject. To underscore the primacy of their position, Cardinal DiNardo, quoted by the Catholic News Service, said the bishops were making a contribution to a “fundamental public debate” based on “our moral tradition and sense of solidarity with people.”

If that is all the bishops are doing, I would have no quarrel with them. I’m perfectly at ease with the Catholic bishops and cardinals telling their own believers how to behave, but they have no right to press upon non-Catholics the same behaviors and ethical standards that they accept within their religion, based on Catholic theology. My religious views and theological perspective lead me to conclusions about aid in dying different from those reached by the bishops.

The bishops begin their analysis of aid in dying by promoting their religious dogma concerning “Christ’s redemption and saving grace.” As one who holds different views, I don’t want our public policy to be based on Catholic theology. Only people who do not appreciate religious diversity and the freedom of religion would want to impose their religious views on others. The bishops fit into that category.

In a news conference about the statement, Cardinal DiNardo makes clear that the bishops want their religious views adopted throughout the U.S. The Cardinal said he hoped it would counter the recent “strong resurgence” in activity by the assisted-suicide movement. The statement asserts,

With expanded funding from wealthy donors, assisted suicide proponents have renewed their aggressive nationwide campaign through legislation, litigation and public advertising, targeting states they see as most susceptible to their message. . . If they succeed, society will undergo a radical change.

These remarks are made with no sense of irony. In both the California aid-in-dying campaign of 1997 and the Washington campaign in 2008, and in the Oregon referenda in 1994 and 1997, the Catholic church spent millions of dollars to defeat propositions that would have clearly expressed the will of the people had they been voted on without interference from the propaganda of any interest group. [Aid in dying was supported in both Oregon votes and in Washington, but was defeated narrowly in California.] Polls show regularly that 70% of the population believe that individuals should have the autonomy to decide their own fates if they become terminally ill and are suffering.

But the Catholic bishops want to impose Catholic doctrine on everyone. They argue that suffering is no cause for concern; it is redemptive because it relates to the suffering of Christ on the cross and, therefore, the public policy of the U.S. must follow Catholic teaching and forbid non-Catholics the right to determine their own fates.

The bishops argue that aid in dying “promotes neither free choice nor compassion.” That, at least, is not a faith-based argument, though I find that it fails to convince individuals who want to decide their fates that they would not be exercising their own free choice in doing so. And I find it uncompassionate to deny me the right to end my suffering. In fact, I find such a position cruel to the point of being sadistic.

One of the most specious of all the arguments made by the bishops is their assertion that “people who request death are vulnerable. They need care and protection. To offer them lethal drugs is a victory not for freedom but for the worst form of neglect.” In fact, the few people who have taken advantage of aid in dying in Oregon have the best of palliative care, emotional support, medical advice, and many opportunities to change their minds.

These people are not vulnerable, isolated, and hopeless. They have looked realistically at what living in suffering will do to them and their families and have decided to end that suffering at a time and place of their own choosing.

Jay Lee, a letter-writer to the Seattle Times, expressed the bishops’ position clearly when he wrote, “The bishops’ opposition to death with dignity is faith-based, not fact-based.”

Barbara Coombs Lee, president of the aid-in-dying organization Compassion and Choices, explained, “While we respect religious instruction to those of the Catholic faith, we find it unacceptable to impose the teachings of one religion on everyone in a pluralistic society.”

She emphasized that “end-of-life care should follow the patient’s values and beliefs, and good medical practice, but not be restricted against the patient’s will by Catholic Church doctrine.”

Cardinal DiNardo has accused supporters of aid in dying of encouraging terminally ill individuals to end their lives. On the contrary, aid-in-dying supporters do not advocate death for anyone, but the right for all of us to choose for ourselves when and how we will die based on our own values.

Such supporters typically believe that everyone should have access to the best medical care available. The Cardinal could better fulfill his religious values by fully supporting universal health care in the U.S., rather than working to deny a few people their personal autonomy as they near the end of their lives.

But for the Cardinal, everything is about his religious beliefs. He said, “Compassion isn’t to say, ‘Here’s a pill.’ It’s to show people the ways we can assist you, up until the time the Lord calls you.” For those with a different religious or theological position, the Cardinal could not care less. He wants to force his Catholic position on everyone.

Of course, what happens in both Oregon and Washington is not to give a person “a pill,” but to engage in an elaborate set of protocols that can allow a dying and suffering person to receive a prescription that they can fill when and if they decide to end their life. Only about 25% of people in Oregon who get such a prescription use it to end their life. About 80% of those who begin the elaborate aid-in-dying process never complete it.

Many find that having the ability to do so gives them great comfort. But that’s the sort of comfort the Catholic bishops will never understand.

2 Responses to Lamar W. Hankins : When Religion Restricts Our Freedom