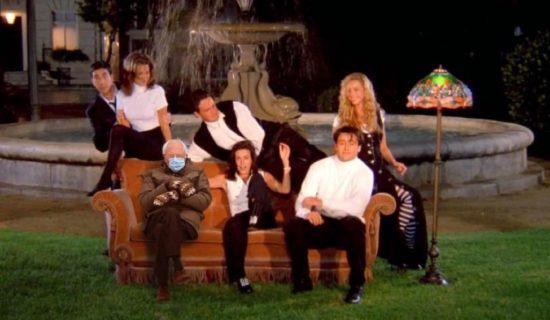 It’s as if Bernie’s lifelong journey of devotion to betterment of all, and becoming over time a beloved benign dogged pursuer of equality and fairness, almost the coming to fruition of a spirit of the age when a true motion forward along the arc of justice and peace is being made, in the wake of a long moment in time when a threat to all that is good and kind hung over us, here now is the wisp of a cosmic reminder of the new moment we are entering, Bernie, his persuasion and example having had its cumulative effect, a rebound success, appearing relaxed sitting comfortably, at ease, swaddled in warmth though winter, his mittens representing the hands-on work he’s done on our communal soul, having the rest he has so well-earned, and in sweet repose he has been appearing all over the country, the world, in famous and anonymous places, in people’s living rooms, weddings, everywhere, placed by people he’s never met who in good humor and touched by a joy and with a hope for the better are coloring in the future with a tongue in cheek but also real homage to a man who believes in us all, believes in our better angels, and who risks being cranky and over the top in the service of people becoming more aware and empowered to uplift our world, which is what his image means as it is injected into so many corners of our lives, like pictures of President Franklin Delano Roosevelt in millions and millions of American homes during the Great Depression and World War II, someone we wouldn’t want to be without, someone who has loved us and known us better than we sometimes know ourselves, understands our better instincts and our need for something better, someone who devoted his life to us and lived it true and truly for the people, at long last an honest man deserving the trust we are capable of, Bernie Sanders gets the victory tour only he could generate, sincere, whimsical, and an honest expression of thanks and admiration. We love you, Bernie.